One last game. One last heist. One last job. Film and TV are chock full of swan songs, many of which serve to resurrect retired characters or spotlight actors beloved by retirees. “The Old Man,” starring Jeff Bridges as an ex-CIA operative brought out of hiding, sits firmly in the latter camp and doesn’t overexert itself trying to separate from the pack. Instead, Jonathan E. Steinberg and Robert Levine’s adaptation of Thomas Perry’s 2017 novel relies on familiarity to craft a serviceable drama with above-average action scenes. Bridges, who also executive produces, is front and center, dragging himself out of bed to pee every few hours yet still resourceful enough to put young whipper-snappers in their place. If his grizzled appeal isn’t enough for you — and odds are, it will be for many — the cast is stacked with talent, from a generous adversary in John Lithgow to Amy Brenneman’s volatile love interest.

For some, such talents could be better utilized in more radical context. For others, there are also two dogs, played by A+ puppers Dave and Carol, who follow Bridges around wherever he goes. These impeccably trained rottweilers are a trick unto themselves — an asset to their master and the show, without a doubt, while also evoking regular responses of, “Aww, now that’s a good dog!” If the simple pleasures of a dude and his dogs roaming America, picking off bad guys, sounds like your desired entertainment, “The Old Man” will provide it. Anything more, well, that’s yet to be seen.

Meet Dan Chase (Bridges). Dan has trouble sleeping. His nights are either interrupted by a persistent bladder, nightmares of his deceased wife, or both. After caring for her throughout a losing battle with Huntington’s Disease, Dan pays close attention to his own mental state. But is he merely getting older, or is some mysterious, undiagnosed ailment to blame? Along with these fears, Dan is getting paranoid. He side-eyes strangers in his small Vermont town. He sets up DIY alarms just outside his bedroom. Over the phone, his daughter assures him that he’s fine, things are fine — but when has a parent ever taken such assurances from their kid?

Of course, Dan is soon proven right. An unnamed intruder breaks into his house and sends him on the run. The way Dan dispatches his unknown assailant tells us this is no ordinary widower. He has a particular set of skills, and they haven’t exactly dulled with age. Over the first four episodes of the first season, Dan’s history is doled out in batches. For one, his name isn’t really Dan. For another, he’s ex-CIA and not exactly a welcome presence at Langley reunion parties. Finding out who Dan is and what Dan’s done is part of the intrigue driving the first few hours, even if the answers are hardly unforeseeable. Still, given the steady (some may say slow!) pace of director Jon Watts’ two entries, having your suspicions confirmed at every other commercial break helps keep things moving.

Chunks of plot are bluntly stated in long stretches of dialogue, but Watts does earn our attention with carefully blocked action. The premiere is built around a series of long takes, some of which simply take advantage of Bridges’ rugged naturalism. Always easy to watch, the Oscar winner plays Dan with a reserved, cagey demeanor appropriate for a spy on the run. But he knows how to dial in a look with the best of them, prying up his brow with simultaneous alarm and admiration, or narrowing his entire face into an inscrutable glare. Seeing him work in uninterrupted stretches is a pleasure unto itself, but that’s not the only reason Watts lets the camera roll minute after minute. Physically, Bridges also plays into people’s under-estimation, shuffling around in small stutters before switching into fight mode with alarming force. Watts mirrors his star by lulling his audience into a deceptive calm, only to shatter that serenity not with your typical hard cut, but a burst of movement through his established frame. 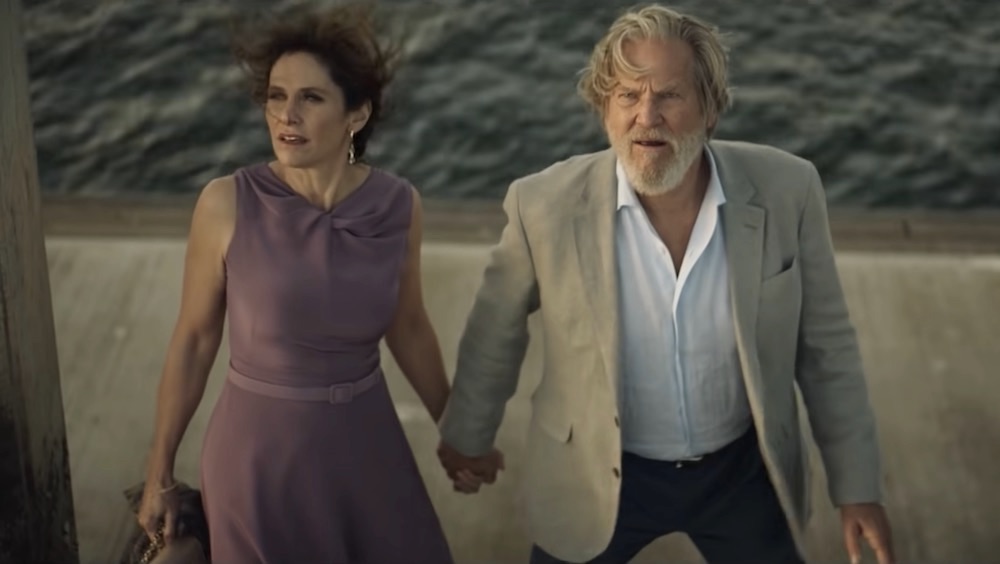 Amy Brenneman and Jeff Bridges in “The Old Man”

Scenes like a lengthy hand-to-hand squabble near the end of the premiere prove compelling. Executing a convincing oner is intriguing on its own, but seeing Bridges — who was diagnosed with lymphoma mid-production and is now, thankfully, in remission — pull off each punch is doubly satisfying. No matter how many stunt doubles are snuck in there, it’s great to a) see one of our finest actors alive and literally kicking, and b) have a meta reminder of Dan’s undeniable toughness. Not once is there an obvious movement or cut meant to hide who’s really fighting, which only makes it all the more believable that Dan (and Bridges) can still get it done.

The rest of “The Old Man” doesn’t exactly live up to these thrills. Dan’s chief adversary — an old ally named Harold Harper who’s now a high-ranking FBI director — is nicely fleshed out and given added emotional heft by Lithgow. Their evolving backstory speaks to one of the show’s broader themes, spoken aloud by Brenneman’s reluctant landlord over a very strange dinner date: “Nobody ever sees themselves as [the villain,]” she says. “There’s a villain in every story, and maybe that’s why: The only one who can play that role is the one who can’t see it happening.”

Maybe Dan isn’t such a good guy. Maybe Harold isn’t such a bad one. Maybe they’re all mixed up in a game where such designations are beyond their control — beyond black and white, beyond right and wrong. Still, “The Old Man” seems comfortable playing into expectations rather than usurping them. Acknowledging that old white men — particularly old white men with wealth and power — may need to reassess their legacies is a few steps removed from arguing they should admit to wrongdoing or get out of the way entirely, and nothing in the first four episodes indicates Dan is on either path. His risky behavior pays off. He’s still the toughest of the tough guys. He’s decidedly not too old for this shit. With his loyal dogs affixed to his side, the FX action-drama expects its audiences to follow suit, lapping up Dan’s final, stubborn, show of force. If that’s fine by you, then sit back and enjoy one more swan song. It won’t be the last of its kind.

“The Old Man” premieres two episodes Thursday, June 16 at 10 p.m. ET on FX. Stream episodes the next day on Hulu.