This week’s pile-up of guild nominations yielded a wealth of intel. Sift through the lists of what’s in and what’s out, and the leaders in the Oscar race are clear. The Directors Guild of America put the cap on the most recent guild awards nominations announced by the Editors, Producers, and Writers Guilds, as well as the previous Actors and other craft guilds.

Here’s what didn’t happen: None of the leading contenders scored slots in all four top Guild Awards: WGA, PGA, DGA, and SAG Ensemble.

Leading the fray are the five DGA nominees: Kenneth Branagh’s Toronto audience award-winner “Belfast,” Paul Thomas Anderson’s ’70s California valentine “Licorice Pizza,” Jane Campion’s neo-western “The Power of the Dog,” Steven Spielberg’s musical remake “West Side Story,” and Denis Villeneuve’s space epic “Dune,” which are all three for four, and show strong support from the crafts as well. They could repeat at the Oscars, although the more international directors’ branch often adds a surprise like Michael Haneke, Mike Leigh, or Pedro Almodovar.

Nominated by the WGA (which has five Adapted and five Original screenplays), the PGA (which has 10 nominees), and SAG Ensemble were Sian Heder’s family heart-tugger “CODA” and Adam McKay’s end-of-the-world satire “Don’t Look Up” (which made a surprising showing among the crafts), as well as Will Smith sport docudrama “King Richard.” 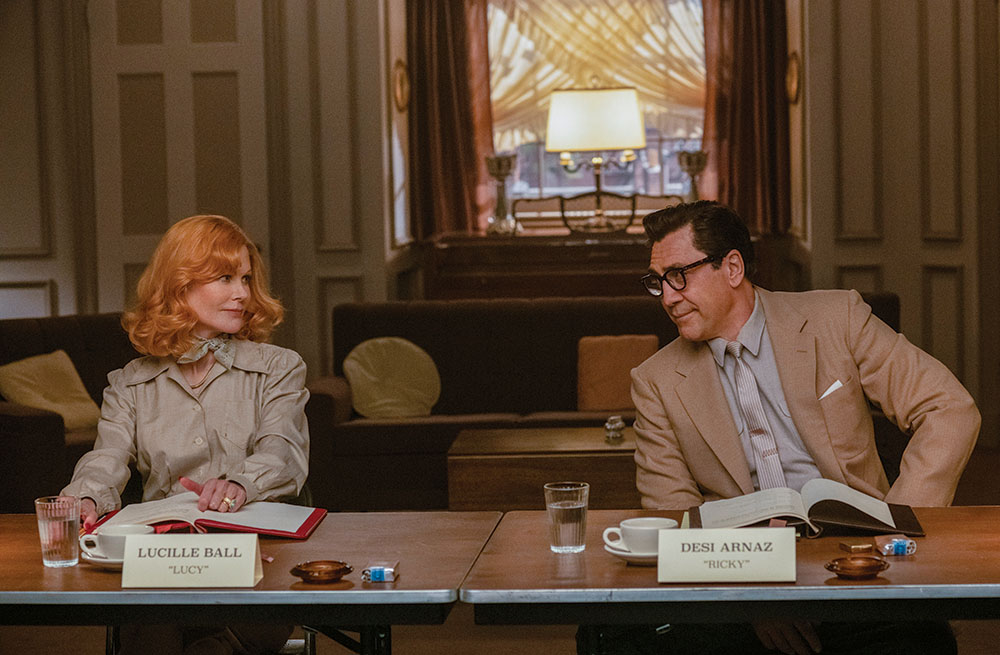 Nicole Kidman and Javier Bardem in “Being the Ricardos”

Coming up on the outside are Aaron Sorkin’s popular Hollywood fable “Becoming the Ricardos,” which landed the WGA and PGA, missed SAG Ensemble, but scored nominations for Nicole Kidman and Javier Bardem. Also in contention is theater-world musical “Tick Tick Boom,” which scored at the PGA and the WGA as well as a SAG nod for Andrew Garfield and for first-time director Lin-Manuel Miranda, a DGA nod.

Also landing a first-time DGA nomination was Maggie Gyllenhaal for “The Lost Daughter,” which was not eligible for the WGA. The Academy writers could still push Gyllenhaal forward, and SAG nominee Olivia Colman is considered a strong Best Actress contender against Kidman.

Among the ranks of the missing: “House of Gucci,” with support that appears to be limited mainly to actors, as it landed slots for Lady Gaga and Jared Leto as well as SAG Ensemble, but did not turn up at the PGA, WGA, or DGA; “The Tragedy of Macbeth,” which came up empty except for some craft mentions, including the American Society of Cinematographers and Art Directors Guild; and “Nightmare Alley,” which missed SAG Ensemble, PGA, and DGA, but landed WGA and several craft nods.

“Nightmare Alley” did turn up on the often-predictive Critics Choice Awards nominations, which matched up with nine out of the 10 PGA nominees; the producers swapped “Nightmare” for “Becoming the Ricardos.”