We might as well add The Trial Of The Chicago 7, which just hit Netflix, to the list of “eerily relevant” stories being told today. While the true story that inspired the film took place over 50 years ago, many of the themes and events mirror current events. Just like 2020, there was more than one reason for political unrest and protest in 1968. This is the story of eight (not seven) protesters and organizers who were charged for inciting a riot.

Where do we even begin?

The true story of The Trial Of The Chicago 7 begins with anti-Vietnam War demonstrations outside of the 1968 Democratic Convention. The protesters were fed up with President Lyndon B. Johnson, though he had dropped out of the race and chosen not to seek re-election. Both Martin Luther King Jr. and Robert F. Kennedy were assassinated in 1968 as well. The former’s death had sparked nation-wide protests historically characterized as riots. With all of that in mind, thousands flew to Chicago to join local groups protesting at the convention where the whole world would be watching. But when they got there, armed Chicago police, as well as members of the National Guard and U.S. Army troops met them and, would you believe it, the protests turned violent. In the aftermath, several of the men in charge of the student and other anti-war organizations (which included the local chapter of the Black Panther Party) were charged with conspiring to cross state lines with the intent to start a riot. The trial took place a year later, at which point President Richard Nixon had taken office and was making efforts to squash leftist/anti-war movements. Prosecuting these protestors was a major part of that effort.

When you read about the defendants and the way they were treated by the court during their trial in 1969, it’s clear that an overall disdain for “hippies” and the counterculture played a major factor in exacerbating the trial and turning it into an event.

Racism was also on display. The eighth defendant, a co-founder of the Black Panther Party named Bobby Seale played by Watchmen’s Yahya Abdul-Mateen II in the film, was bound and gagged in court for days after “disrupting the court” when his constitutional rights were violated. Seale’s lawyer was in surgery, and the court refused to wait until he was out of the hospital or allow Seale to represent himself. It was terrible, and incredibly racist. Ultimately Seale was dismissed, tried separately, and then there were seven.

Okay, so who were the Seven?

The titular Chicago Seven include Jerry Rubin (Jeremy Strong) and Abbie Hoffman (Sacha Baron Cohen), co-founders of the Youth International Party known as “yippies.” The two of them pulled a lot of antics and wore costumes to the court on several occasions. At one point leading up to the convention, IRL, Rubin did a whole bit where he nominated a pig named “Pigasus” for president. 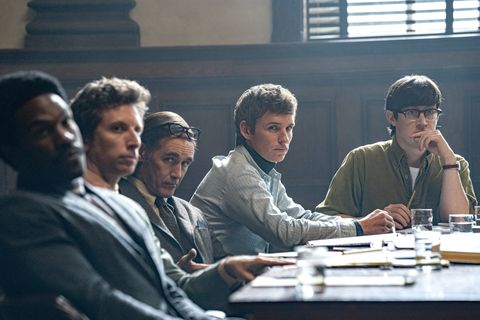 Next is Tom Hayden (Eddie Redmayne) and Rennie Davis (Alex Sharp), co-founders of the Students for Democratic Society. The real Hayden was married to Jane Fonda at the time, fun fact, and she attended the protests as well. Davis had to be hospitalized after the protests, and hidden from police who tried to arrest him while getting medical treatment. Last were two professors named John Froines (Danny Flaherty) and Lee Weiner (Noah Robbins) who were accused of instructing others in how to make Molotov cocktails, and a pacifist organizer named David Dellinger (John Carroll Lynch).

The trial went on for months and included celebrity testimonies from popular poets, writers, and musicians who supported the defendants. In a sense, the trial became a battle between the counterculture and the war/establishment itself. Years later, a report concluded that the riots were instigated by the police and not a conspiracy by the protestors. Every defendant, including Seale, was cleared of all charges.

While the specific timeline may have been smudged for dramatic effect, and Sweetbitter actress Caitlin Fitzgerald’s character has been invented, it’s not hard to look up what went down at the Trial of the Chicago 7 and learn it pretty much happened the way you see it on screen.