Turning “The Song of Bernadette” into a horror film is a starter, but then it stalls 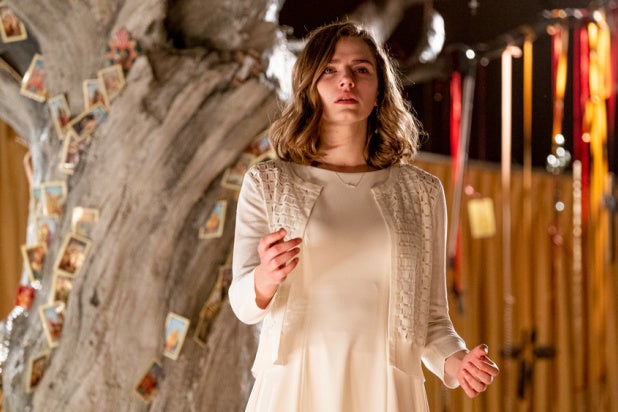 There’s the germ of a provocative idea in “The Unholy” — namely, what if you took a religious-visitation movie like “The Song of Bernadette” or “The Miracle of Our Lady of Fatima” and turned it into a horror movie? Had the film bothered, or dared, to pursue that notion to the fullest, “The Unholy” might be something other than the standard-issue, priests-versus-demonic-spirits thriller that it is.

You’ve seen this one before, countless times, with its superhero priests and seemingly omnipotent spirits who are somehow powerless against containment prayers and quick-thinking investigative journalists. On top of that, it’s a PG-13 horror movie, which takes excessive gore off the table, pushing the director (in this case, screenwriting-vet-turned-debut-director Evan Spiliotopolous) to replace it with lukewarm jump scares.

The film’s opening sequence, set in 19th-century Massachusetts, offers a woman’s POV. She’s accused of being possessed, then nailed to a tree and set on fire. (Yes, this is another movie where witch-burners are portrayed as correct and virtuous rather than the fanatical misogynists that history has shown them to be.) The woman’s spirit is captured in the body of a doll that is left at the bottom of the tree so that disgraced journalist Gerry Fenn (Jeffrey Dean Morgan) can find it in the modern day and crush it in order to instigate a phony story he’s writing about cattle mutilations for a dodgy website.

His careless act unleashes the spirit, which possesses Alice (first-timer Cricket Brown), the deaf and mute niece of Father Hagan (William Sadler), whose church is adjacent to the tree. Alice miraculously begins speaking and hearing, bringing a message that she has been visited by the spirit of Mary.

That no one bothers to ask which Mary leads everyone into typical scary-movie trouble, from the people that Alice heals (including her emphysema-suffering uncle) to the diocese’s unscrupulous bishop (Cary Elwes, with an erratic clam-chowdah accent), who sees dollar signs at the prospect of this small Massachusetts town becoming the next Lourdes.

Spiliotopolous’ screenplay (based on the novel “Shine” by James Herbert) pays lip service to the idea that miracles can bring as much bad as good into the world, and that it’s hard to distinguish the hand of God from the trickery of the devil. (Lil Nas X covers these issues, with more depth and artistic fervor, in 190 seconds in his “Montero (Call Me By Your Name)” video.) But you can also sense the filmmaker holding back and trying not to offend; even the craven bishop is balanced out by young Monsignor Delgarde (Diogo Morgado, “Son of God”), the savior-in-a-collar required in any movie about demonic possession.

Sam Raimi is a producer here, and it’s hard not to think about how he might have mined this material both for provocation and for fright; his “Drag Me to Hell” remains the gold standard of how to scare the heck out of an audience within the restrictions of PG-13. What we get instead here is a tepid little chiller with an overqualified cast, which also includes Katie Aselton as the local doctor. There’s not a lot of local flavor on display, and the low budget shows when Alice’s miracles don’t attract a throng of hopefuls waiting to be cured.

The distributor is playing up the fact that this film is hitting theaters on Good Friday, but that seems like a decision based more on exploitation than on provocation. Opening-night viewers of “The Unholy” will be likely to have forgotten it by Easter.