This Is Us Recap: Kate and Toby Finally Reach Their Breaking Point

The good news: In this week’s This Is Us, little Jack doesn’t take a tumble into the fiery backyard smoker like I (and maybe you) feared.

The bad news: He does incur an injury that involves much shouting, crying and a trip to the emergency room for stitches. And it’s hard to see how his parents’ marriage is going to rebound from the incident and everything that surrounds it.

Read on for the highlights of “Saturday in the Park.”

A TRICKLE TURNS INTO A FLOOD | The episode begins with little Jack in bed, listening to his parents fight about Kate putting her name in for the new job at her school. They immediately drop the argument when they realize that Jack is awake, and they put on cheery faces as the three of them make their way to the park. Along the way, Kate sings very helpful alternate lyrics to Chicago’s “Saturday in the Park,” which assist Jack in navigating their neighborhood. And while he’s on the swings and Kate and Toby are pushing him and laughing, all is (temporarily) well with the Damon family. (Side note: Um, where’s Hailey?) 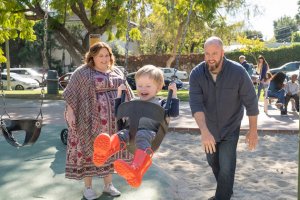 But the happiness is just a patch, as we learn as we watch everyone preparing for Miguel and Rebecca’s 10th anniversary barbecue at Toby and Kate’s place. Things are very tense between Kate and Toby, and everyone kinda knows what’s going on. When Randall and Beth arrive, Kate hugs her brother and starts crying. After she calms down, she asks him to take Kevin — who’s moving into his own home soon but who’s driving Toby insane in the meantime — and get him out of the house for a while so everyone can cool off.

And then the kitchen ceiling, which you’ll recall Toby dealt with a while back, starts leaking again. Miguel goes to shut off the water to the house. Kate and Toby start yelling at each other. And Rebecca, who is frustrated that no one is letting her do anything related to anything important, takes Jack into his bedroom to put on his shoes.

In the boy’s room, Jack tells her that he wears his rain boots to the park on Saturdays. (This will become important info later.) He also says he’s sad, because “Mommy and Daddy are mad a lot.” Good lord, this kid is such a good little actor! Meanwhile, Beth brings Toby a coconut drink in the backyard and offers that long-distance was tough on her and Randall, too, but they made it through. “I think the difference is, you moved for him, Beth,” Toby says, standing at the smoker. She says she did so for herself, her work… and her marriage, he finishes, and she can’t deny it.

MADISON MOVES ON | Kevin and Randall go to pick up the twins, but because they’re two hours early, Madison is just about to bring the kids to music class. So the guys stick around to talk with Elijah. When Kevin goes looking for him in the house, he finds him poking around in Madison’s jewelry box and holding a ring sizer: Yep, he wants to propose.

The news makes Kevin feel “not good,” so Randall informs him that they’re just going to drive around until any ideas about grand romantic gestures are gone from his brain.

In the end, when he finds out Madison is excited about the prospect of marrying Elijah (she’s fairly certain he’s going to ask soon), Kevin finds it within himself to be happy for her. And she reassures him that their relationship, as the twins’ parents, is going to be around for a very long time, and she’ll be there for him as long as he needs her. 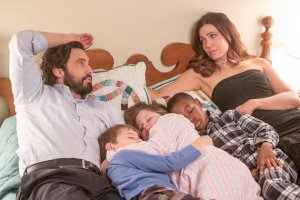 NOT THE ANNIVERSARY JACK PLANNED | Let’s pause here a moment and go to the flashback, which is to the time when The Big Three were 6 years old. It’s Jack and Rebecca’s sixth anniversary, and they’re going to go out to a fancy dinner while a babysitter stays with the kids. Rebecca gets all jazzed up about the notion of dressing up and enjoying elaborate cocktails; Jack is more interested in the anniversary sex they’ll have when they get home and the kids are asleep.

Alas, Rebecca only imbibes three ridiculously named drinks before the babysitter is calling the restaurant: When the kids didn’t like that she called Kate “Chatty Kathy,” they locked the sitter in the bathroom. Mom and Dad Pearson rush home; she’s drunk and silly, he’s not pleased at the kids’ behavior. But when Kevin and Randall explain that they were just defending Kate, everything is pretty much forgiven.

Later, when Rebecca has sobered and the kiddos are asleep between her and Jack on their bed, she’s content. “This is a seminal moment, Jack,” she whispers, citing how their children banded together against someone who’d hurt one of them. “I couldn’t ask for a better gift.” 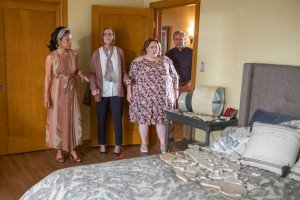 A VERY CLOSE CALL | OK, back to the Damon home, which is literally and figuratively falling apart. The leak breaks through the bedroom ceiling, sending everyone scurrying in there to minimize the damage. In the chaos, Toby puts Jack in his room but isn’t careful about making sure the clasp on his gate is completely closed — something that Kate had berated him for earlier in the episode. And when the plumber arrives, Kate doesn’t lock the front door behind him, which will prove a huge mistake, as well, in a moment.

Little Jack pulls on his galoshes, grabs his cane and heads out to the park while all of the adults are otherwise occupied. He’s singing “Saturday in the Park” to himself as he goes, and he’s doing a great job, but it’s still just luck that he’s able to cross a two-lane road without something terrible happening.

Back at the house, everyone realizes Jack is gone, and terror settles over the place. Kate, Toby, Miguel, Rebecca and Beth frantically search the place and check in with the neighbors. Eventually, Rebecca realizes that Jack swapped his sneakers for his rain boots, and she shouts that he’s likely headed toward the park. While Kate calls the police, Rebecca runs after her grandson.

She gets there just after Jack has taken a fall that leaves him with a gash at his hairline — the one that his future wife Lucy referenced in a flash-forward earlier this season. Rebecca scoops up the boy and comforts him, heaving her own grateful sighs of relief that he’s OK.

KATE AND TOBY DON’T MINCE WORDS | After a visit to the emergency room, Kate and Toby bring their son home and put him to bed. Then, they go outside and fight. She yells at him about not hearing the click in the gate. He counters that she left the door open. Then the argument morphs into larger issues with how each of them think about Jack’s blindness. “All you’ve ever seen were his limitations,” Kate says, adding that Toby started pulling away from the family way back when it became clear that Jack’s condition was not reversible. Toby, irate, claims that Kate can’t see any limitations in their son, and that’s irresponsible.

By this point, Kevin and Randall have returned from the hospital and become involved in the front-yard proceedings. Kevin directs his brother-in-law to back up “and watch how you talk to her.” Randall also tells Toby to stop doing what he’s doing. Toby takes a look at The Big Three and laughs bitterly. “There it is. This is perfect, the way it’s always been,” he says.

THE FALLOUT | Toby goes inside, sits by Jack’s bedside, and cries while HAIM’s “Hallelujah” plays on the soundtrack. Outside, Kate tells Kevin and Randall that Jack said the reason he went to the park was “because that’s where Mommy and Daddy are happy.” OOF. “I don’t know if Toby and I are going to make it,” Kate confesses, crying, as her brothers hold her hands.

Now it’s your turn. What did you think of the episode? Sound off in the comments!