‘Bachelor in Paradise’ Heats Up in Ratings

SAN FRANCISCO, CALIFORNIA- APRIL 06: A cyclist rides his bike by an AMC theatre during the coronavirus (COVID-19) pandemic on April 06, 2020 in San Francisco, California. The future of AMC movie theaters remains in question after shuttering all of its theaters and furloughing all 600 of its corporate staff including CEO Adam Aron. Residents in the San Francisco Bay Area are continuing to shelter in place due to the coronavirus. (Photo by Justin Sullivan/Getty Images)

A turbulent summer reopening brought progress for theaters, but there’s still a long way to go.

The 2021 summer box office was unlike any ever seen, defined more by a still-raging pandemic than by the blockbusters that graced the big (and small) screen. But as the season ended with Labor Day weekend, it’s clear that a lot of progress has been made by studios and ailing movie theaters — but there’s still a long way to go, as year-to-date totals remain 72% behind 2019.

As expected, there were no $100 million-plus opening weekends that usually pop up through this time of year, and fears of speed bumps in the pandemic recovery were realized when the Delta variant spread throughout the world. Despite this, the summer box office – including a final boost from Disney/Marvel’s “Shang-Chi and the Legend of the Ten Rings” this past weekend — finished with a total of $1.75 billion, about 41% of the $4.31 billion domestic total of 2019. (Granted, 2018 and 2019 both saw record summer box office due to two mega-blockbuster “Avengers” films.)

It’s also worth noting that the summer period, which is measured from the first weekend of May through Labor Day, was slow this year until the release of Paramount’s “A Quiet Place – Part II” on Memorial Day weekend and ended with the strongest Labor Day opening ever with “Shang-Chi,” an inversion of how summers usually play out. 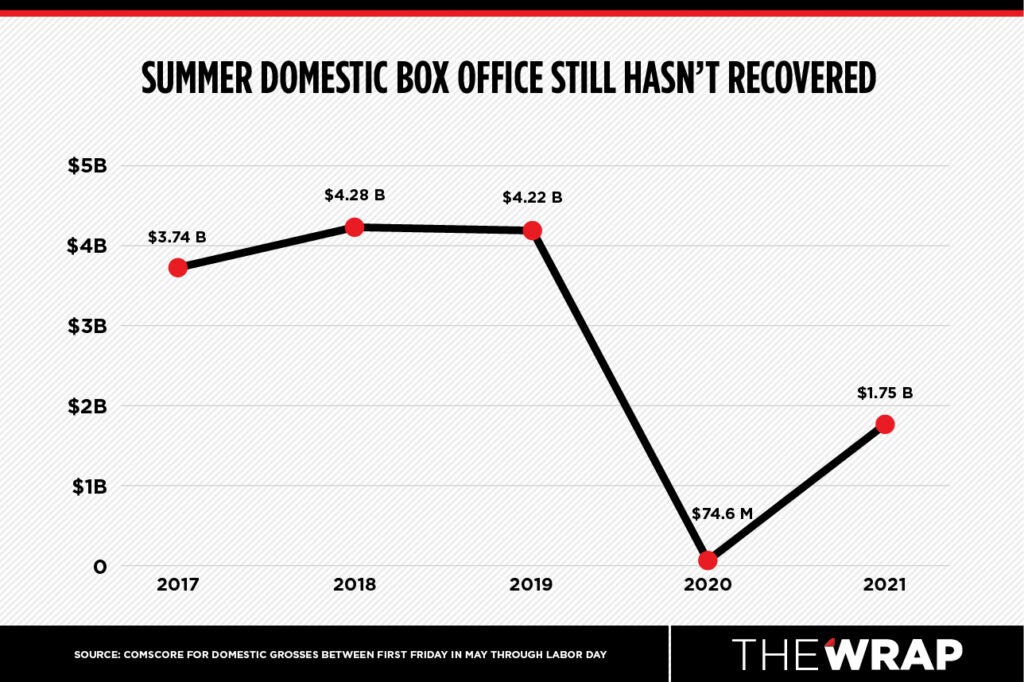 First the good news: Most of Hollywood’s biggest franchises are still drawing people to theaters. “Quiet Place II,” Universal’s “F9” and Disney/Marvel’s “Black Widow” all grossed over $100 million in North America. Each of those films served as the first movie that millions of people have seen in a theater since the pandemic. While NRG polls showing customer confidence in going to movie theaters has fallen from around 80% to 65% since the Delta surge, the sustained confidence among younger and non-family moviegoers is in good part to the experience they had going to cinemas where COVID-19 safety protocols have been implemented.

The summer has also seen Disney quickly reassert itself as the box office king. The studio has been in the headlines for the wrong reasons as its day-and-date release strategy with Disney+ has irked exhibitors and sparked a lawsuit from “Black Widow” star Scarlett Johansson. But once “Shang-Chi” and “Free Guy” pass $100 million this coming week, Disney will have released four of the six films to pass that domestic milestone this year.

And while Disney has only released six films this year, all of them have Rotten Tomatoes audience score of over 90%, showing that even as it continues to explore day-and-date options, Disney is still providing popular box office hits on a regular basis to exhibitors in sore need of them.

Warner Bros., which has released 13 movies at a steady clip simultaneously in theaters and on HBO Max, has grossed $459 million so far this year. Universal has used its 45-day theatrical window deals with top theater chains to provide similar release output to Warner with $446 million grossed from 15 films, 39% of which has come from the $172 million earned by “F9.”

But while tentpoles and a return to consistent releasing has started the rebuilding process, there are missing pieces that the box office needs to bring grosses to 80-90% of pre-pandemic levels. That is the level that AMC Theatres CEO Adam Aron said in a recent call that his company and exhibitors in general need business to return to in order to generate consistent profit again. 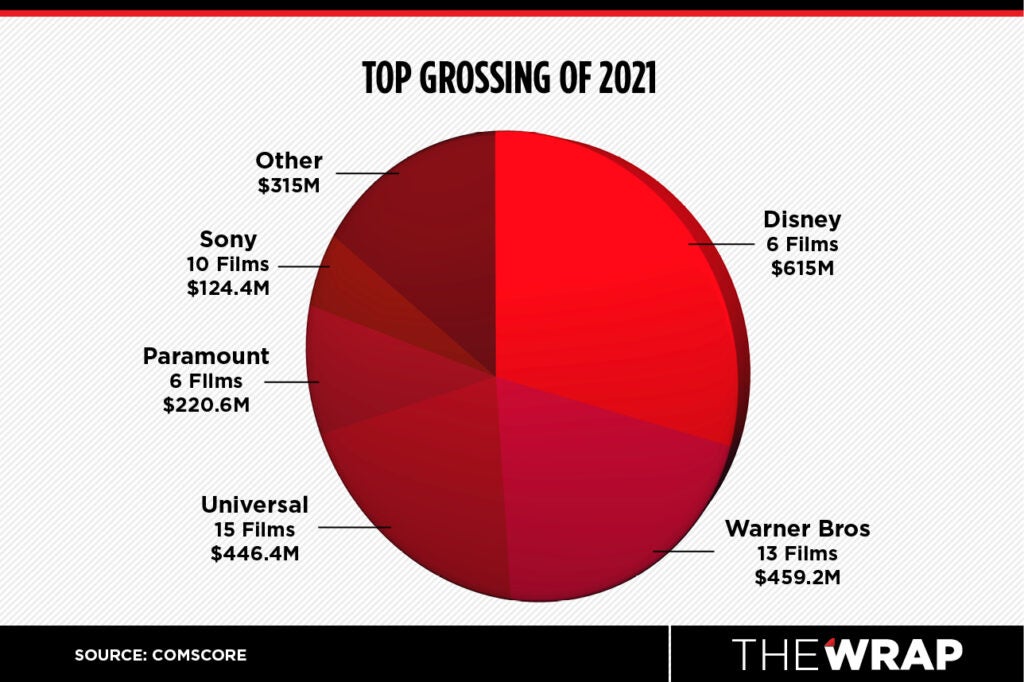 That will mean that studios are going to have to find a way to get older audiences back into theaters at a time when COVID has made them far more reluctant to buy tickets than their 18- to 35-year-old counterparts. Help on that front could come with MGM’s James Bond thriller “No Time to Die” and the arrival of potential Oscar contenders like Neon/Topic’s Princess Diana biopic “Spencer” and MGM’s “House of Gucci” coming out of fall film festivals.

Theaters are also hoping that in general, the sort of diverse slate offerings that fueled record highs prior to the pandemic return this fall. AMC has said in earnings reports that it believes that with the product coming down the pipe, Q4 could see the box office hit that 80-90% mark, and distributors told TheWrap agree that this is possible.

“Even though ‘Top Gun: Maverick’ moved out of November, there’s still films like ‘No Time to Die,’ ‘Eternals’ and ‘Spider-Man’ that should provide big business, and the usual round of Oscar contenders like ‘West Side Story’ will bring in a more diverse set of moviegoers than what we’ve seen so far this year,” one distributor said.

But of course, this hinges on avoiding another COVID surge that could damage moviegoer and distributor confidence, something that health officials warn is possible even if vaccinations are expected to prevent a winter spike like the one seen last year. The constant presence of the virus, combined with the unprecedented hybrid release strategy used for several major titles, has made it difficult for analysts and industry execs to get a full grasp on the state of the box office. 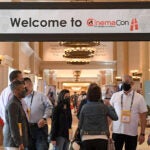 A prime example is the performance of Warner Bros.’ “The Suicide Squad,” which has struggled with just $54 million domestically against a reported $185 million budget despite the presence of the DC brand and names like John Cena, Margot Robbie and director James Gunn attached. The film became part of a turbulent late summer period where Disney’s “Free Guy” and “Jungle Cruise” legged out but no film between “Black Widow” and “Shang-Chi” opened above $35 million.

That’s why the success of “Shang-Chi” has been a welcome confidence booster for studios, as seen by Sony’s decision on Monday to move up the release of “Venom: Let There Be Carnage” by two weeks. One exec said that prior to Labor Day weekend, the performance of “The Suicide Squad,” even given its status as an R-rated film released simultaneously on streaming, had caused some nervousness in Hollywood.

“It just made everyone wonder if their tentpoles would do well if a DC film that critics and audiences really liked wasn’t getting the numbers we thought it would,” the exec said. “There was a lot of double and triple checking of all the data just made harder by how the situation with the pandemic changes on a daily basis in regions around the world.” 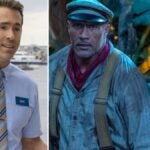 Even in the best case scenario, domestic and global grosses for 2021 will finish billions upon billions of dollars short of what was seen prior to 2020. There is still optimism for next year’s slate, as there’s hope that stronger blockbusters like Paramount’s “Mission: Impossible 7” and Disney/Marvel’s “Black Panther: Wakanda Forever” will perform better as the global vaccination campaign continues.

But theaters really would like to not have to wait that long to get out of the red. While recent quarterly reports have shown that major chains like AMC and Cinemark have drastically reduced the losses inflicted during last year’s shutdown, they are still losing money: AMC reported a net loss of $344 million in the second quarter, while Cinemark recorded a net $142.5 million loss.

Box office recovery was always going to be a marathon and not a sprint, and it was expected that it would take over a year for something resembling normality to be restored. But the speed of that recovery is still at the mercy of a virus that is still circulating worldwide and constantly mutating and the efforts to fight it with vaccines — as well as studios’ willingness to release major titles in theaters given that uncertainty. Whether this fall and holiday season sees movie theaters enjoy a larger wave of audiences for new films or more release date and strategy changes in response to a larger wave of infections will not be determined by show business, but by science and public policy.