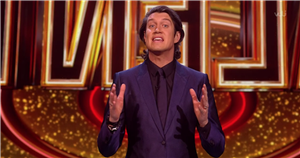 Vernon Kay returned to primetime television on Saturday night and fans of the television presenter were delighted to see the star back on their screens.

Fresh from his stint on I'm a Celebrity.. Get Me Out of Here, the 46-year-old presenter was on hand to host brand-new ITV series Game of Talents.

The show format sees contestants asked to guess what a member of the public's talent is, for a chance to win cash prizes.

In each hour-long episode contestants will pair with a celebrity and they will try to guess the hidden talent of eight mystery performers based on "appearance" and "intriguing clues".

The show bears a resemblance to ITV's smash hit The Masked Singer, which also sees judges attempt to decipher someone's identity through clues, and will aim to replicate that success.

Vernon's wife Tess Daly and her Strictly Come Dancing co-star Craig Revel Horwood featured as guests in the first episode, helping the contestants to win a big sum on money.

Viewers watching at home rushed to their keyboards to share their views on Vernon and his new show.

Taking to Twitter, one fan penned: "#GameOfTalents is pretty good!"

Another added: "The way Tess lovingly looks at Vernon."

A third person posted: "@vernonkay nice to see you back where you belong #SaturdayNightSpecialist."

Over the years, Vernon has presented show like All Star Family Fortunes, Splash and more recently fronting coverage of Formula E.

The father of two came third in the recent series of I'm A Celebrity, which was relocated from Australia to Wales.

After landing his new presenting gig, Vernon gushed: "We’re lining up some amazing performers whose skills are both jaw-droppingly brilliant and at times surreal."

"I can’t wait for viewers to play along at home and try to guess who has which hidden talent. Prepare to be shocked and amazed in equal measure," he added.

The show's format was first launched in Spain and has proved to be uber successful as it's now entering its third season.

Strictly champion winner Oti Mabuse will join up with her The Masked Dancer co-star Joel Dommett later in the series, while TV personality Michelle Visage and Spice Girl Mel B will also feature.

Game of Talents continues on ITV next Saturday at 7.30pm