Leanne (Jane Danson) and Nick (Ben Price) thought that all of their troubles were over in Coronation Street when Harvey Gaskell (Will Mellor) was sent to prison. Little did they know that the drug dealer would be back to torment them from behind bars.

A new Corrie spoiler video shows Leanne and Nick both receiving visiting orders from Harvey, with neither of them able to work out what he wants.

Having been nearly a year since the death of Natasha (Rachel Leskovac), Leanne assumes that he wants to remind them of his crimes. Nick insists that, whatever it is, they mustn’t tell Sam (Jude Riordan).

Unbeknown to them, Sam has already been in contact with Harvey, having been seen posting letters to his mother’s murderer by Hope (Isabella Flanagan).

Whether or not to visit him was a question that doesn’t need discussing, with Leanne telling Nick that she wouldn’t want to be in a room with him again.

Viewers will recall that during last years’ epic sink hole drama, Harvey held Leanne hostage in the Bistro. She managed to escape, leading to Harvey shooting Natasha in a case of mistaken identity. 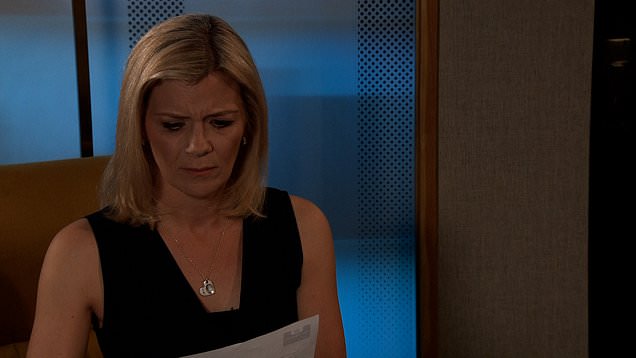 Nick agreed with Leanne, and decisively tore up the letter.

Is this the last they’ll hear from evil Harvey, or will he be back to torment them once again?