Will Meghan Markle Be at Trooping the Colour?

Trooping the Colour is one of the few times in the year when most members of the royal family join together in an official royal engagement to mark the queen’s birthday. But, this year’s attendance might look a little different than last year’s. With Meghan Markle on maternity leave, many are wondering if the Duchess of Sussex will be in attendance to celebrate her grandmother-in-law and if Baby Archie will join her.

Will Meghan Markle be at Trooping the Colour? Find out who will celebrate the festivities this weekend, ahead.

What is Trooping the Colour?

On Saturday, June 8, 2019, the royal family will gather together at Buckingham Palace in honor of Trooping the Colour. Trooping the Colour dates back to 1748 and is a large, public celebration in honor of the reigning monarch’s official birthday. The tradition doesn’t occur on the same date every year but is usually marked within the first two weeks of June.

The Trooping the Colour festivities typically consist of a parade featuring 1,400 soldiers, 200 horses, and 400 musicians. And, according to Express, it’s “one of the most esteemed military displays in the world.” In addition to the parading soldiers, horses, and musicians, members of the royal family take part in the parade and pair up in stunning carriages. Royal men, including Prince Charles, Prince William, and Prince Harry typically wear their military uniforms and women rock their finest hats in honor of the daytime formality.

Following the parade, the royal family makes their way to the Buckingham Palace balcony to soak in the crowd, take some photos, and enjoy a flypast by the Royal Air Force.

Who will be at Trooping the Colour 2019? 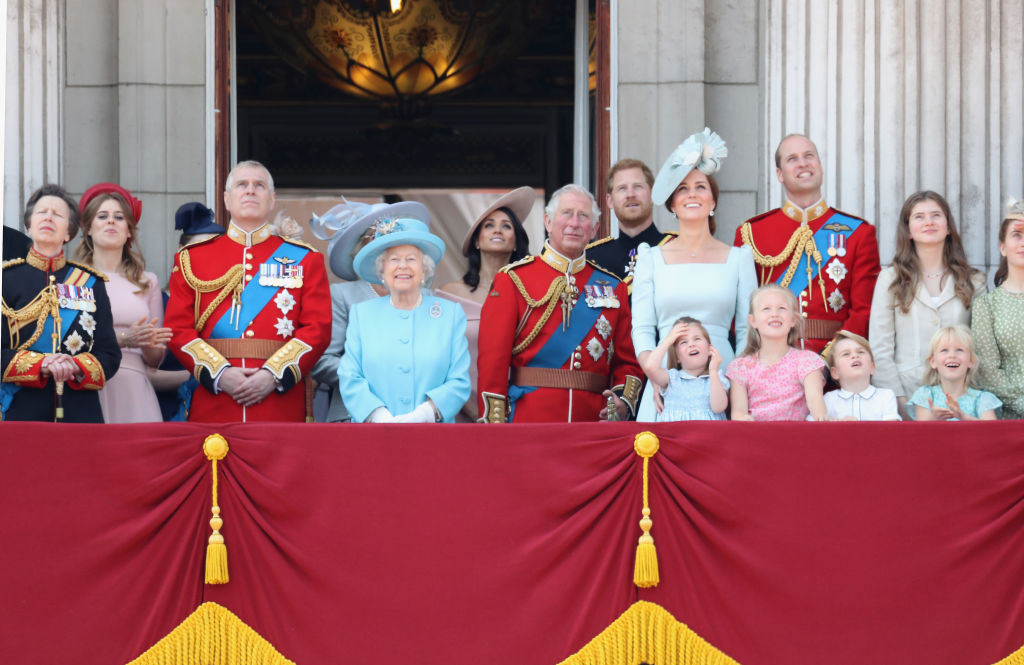 Trooping the Colour is exciting every year, especially since it’s one of the few times all royal family members are together in an official capacity. However, this year is extra exciting as it marks Prince William and Kate Middleton’s youngest son, Prince Louis’s first Trooping the Colour.

Additionally, Meghan Markle is also expected to make her first appearance following her son’s official photocall in May. The festivities take place during Meghan Markle’s maternity leave, making it a rare instance in which the Duchess of Sussex will participate in her official duties. Meghan Markle will, of course, be joined by Prince Harry. However, according to reports, they will leave their son at home.

Baby Archie won’t be the only royal missing the queen’s official birthday party. Prince Philip will likely not be in attendance as well. The Duke of Edinburgh was absent last year and many suspect the retired royal will sit this year out, too.

Who else will be at Trooping the Colour 2019? Queen Elizabeth will, of course, be present. And she will be joined by her eldest son and heir, Prince Charles, as well as Camilla Parker Bowles. Prince William and Kate Middleton will also be in attendance with their three children. Princess Anne, Prince Andrew, and Prince Edward will also likely be there with their families, including Princess Anne’s children, Peter Phillips and Zara Tindall who typically stay out of the royal spotlight.