100 days out from the Games, Tokyo organisers press on as if vaccines don’t exist

Singapore: Tokyo Olympic chiefs will wait until the last minute before deciding how many spectators will be allowed into stadiums to watch the Summer Games as coronavirus cases surge in Japan.

Hospital COVID-19 occupancy rates have reached 90 per cent in some areas three months out from the start of the Games, forcing organisers to establish contingency plans, coronavirus testing protocols for athletes and book out hotels to isolate infected participants. 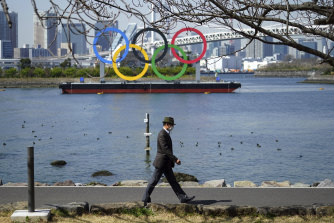 The Olympic rings float off Odaiba in Tokyo. Credit:AP

“I would say we are very determined, we are vigilant and we are very hopeful,” said Maki Kobayashi, an executive director on the Tokyo Organising Committee.

The director of the Games secretariat, Makoto Hirano, said Japan’s vaccine rollout had been too slow and was still vulnerable to export restrictions. The country, like Australia, has limited local vaccine production capability leaving it largely reliant on imports from Europe.

“That is a fact,” Hirano said from Tokyo in an interview with The Sydney Morning Herald and The Age.

“But we feel that probably by around June, we will manage to have vaccinated all of the health professionals as well as the population aged over 65.”

The slow vaccinations combined with surging case numbers have forced the Olympic Committee to host the event as if vaccinations did not exist. “All the preparations are based on a no-vaccination situation,” said Kobayashi.

Organisers are now locked in negotiations ahead of an April deadline for the updated Olympic playbooks, which will determine how the coronavirus-restricted Games will run.

Japan allowed between 10 and 50 per cent capacity at football and baseball games after the first wave of the pandemic, but those numbers are now vulnerable to rising infection rates.

“We will adopt a basic direction on spectators by the end of April,” said Hirano. “That would be a provisional conclusion but not the final conclusion. Based on the infection situation we will seek various possibilities until we are at the very last minute of the Games.” 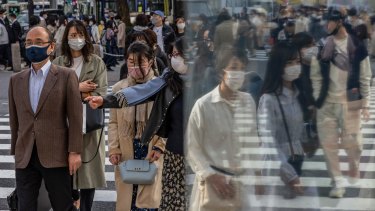 The Japanese government ended the pandemic-induced state of emergency in March but COVID infections have continued to rise in some areas. Credit:Getty Images

International spectators have already been banned from entering Japan, leaving athletes facing the prospect of largely empty stadiums if local attendance is also restricted. Kobayashi said blocking international fans was a “heartbreaking decision” but organisers were left with no other choice given the spread of the disease that has killed almost 3 million people around the world.

The 11,000 athletes expected to travel to Tokyo in July will be subject to strict social distancing measures that prevent shouting, cheering and singing for teammates. They will largely be confined to their accommodation, training or events for the duration of the Games. Face masks will be mandatory at all times outside competing, eating or sleeping. Athletes will be tested for COVID-19 at least every four days. Twice recording a temperature of 37.5 degrees or more will see them blocked from entering venues for their events.

Organisers have not ruled out the possibility of scrapping heats, matches or events entirely if athletes test positive and their close contacts have to isolate, putting years of preparation at risk to factors out of their control. The Kyodo news agency reported on Sunday that Tokyo Olympic organisers planned to prepare 300 hotel rooms for athletes who test positive for COVID-19 at the Games but show no or minor symptoms.

“We will have to immediately make decisions if that is going to affect the next event,” Kobayashi said.

“We have been having conversations with different organisers of other international events, including the Tour de France and the Australian Open.

“We’re not making any specific model, but we are learning from all different sorts of sporting events, to see what sort of preventive measures we have to take.”

The Games have also become a political challenge for Yoshihide Suga’s government with polls consistently finding two-thirds or more of the Japanese public wanting them cancelled or postponed. The event, still technically the 2020 Summer Games, has already been postponed by a year.

Organisers had hoped that the torch relay would spur popular support but the pre-Olympic tradition, which began in Fukushima on March 24, has itself been hampered by the coronavirus. In Osaka, where infections have reached record levels of 1000 a day, the relay was taken off public roads and into a park without spectators.

“If we can convince people that we can hold the Games in a secure and safe environment, I’m sure that the opinion polls will change,” Kobayashi said.

The Olympics, due to begin on July 23, have been framed as part of the global economic rehabilitation from the pandemic. “Personally, I hope these Games will be a trigger for recovery,” said Hirano.

But they have also triggered scrutiny of Japan’s own structural inequalities. The creative director of the Games Hiroshi Sasaki stood down in March later after he suggested Japanese actress Naomi Watanabe could perform in the ceremony as an “Olympig”.

Former Olympics chief Yoshiro Mori resigned a month earlier after he protested calls for more women to be included on the Olympics board, arguing they talk too much and “have a strong sense of rivalry”.

Mori was replaced by Seiko Hashimoto, a seven-time Olympian and one of only two women in Suga’s cabinet.

“We never really thought it was going to be raised like this but we will take this opportunity to make sure that in many years people will think that the Tokyo 2020 Games were a turning point that really advanced society,” said Kobayashi

Older males continue to dominate the leadership of political, business and sporting spheres in Japan. Only 15 per cent of Japanese MPs are women. “We need to change it,” said Hirano.

The Games will also have a strong environmental focus, with a no-waste, no emissions policy. The emphasis has been on using existing venues where possible, while the athlete’s village and other facilities will be converted into longer-term residences and a school after the Olympic and Paralympic events. The podiums have been built from recycled plastic waste from the ocean.

“The Olympic medals have been made from metals extracted from smartphones and other electric appliances,” Kobayashi said.