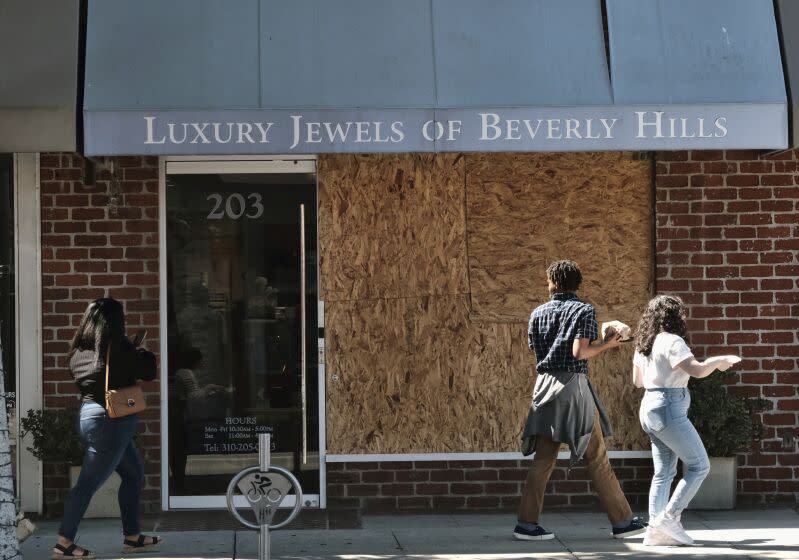 Three suspects have been arrested in connection with a March robbery in which they allegedly stole $5 million worth of jewelry from a high-end Beverly Hills jeweler during a brazen daytime heist, authorities said.

Deshon Bell, 20, from Long Beach, and an unidentified juvenile from Long Beach were arrested Wednesday, the Beverly Hills Police Department said in a news release. Police also said they recovered a 9 mm handgun and high capacity magazine during Bell's arrest.

A third suspect, Jimmy Lee Vernon of Gardena, was arrested by California Highway Patrol officers during a traffic stop in Barstow.

Authorities said that a fourth suspect, Ladell Tharpe, 37, from Los Angeles, was already in custody for an unrelated offense. Tharpe has been charged in a federal criminal complaint with robbery in connection with the incident in the 200 block of South Beverly Drive.

On March 22, police responded to calls of up to six sledgehammer-wielding burglars who smashed the glass windows and display cases of Luxury Jewels of Beverly Hills and allegedly stole around $5 million in precious gems, designer watches and necklaces in broad daylight. The burglars fled within minutes, while the store was surrounded by Beverly Hills police cars. At the time, Beverly Hills Police Chief Mark Stainbrook said that the burglars hid their features with hoodies and masks.

According to Stainbrook, police used surveillance footage in their investigation from private and public cameras and eventually identified the getaway vehicle and suspects. Police said it coordinated with agents from the FBI and the United States attorney’s office to secure arrest warrants against three suspects.