Thirty captive lions have been put down after they were left starving and untreated for wounds sustained when a fire ripped through their enclosure in South Africa.

The animals had already gone without food for some time before the blaze engulfed their compound in the Free State in August.

One lion was killed and eaten by three of his brothers, while others were left to starve, many too weak to stand with bleeding sores on their paws from the burns.

Welfare officers who discovered the big cat breeding centre, where a total of 59 lions and tigers were kept, said it was one of the worst animal cruelty cases they have ever seen. 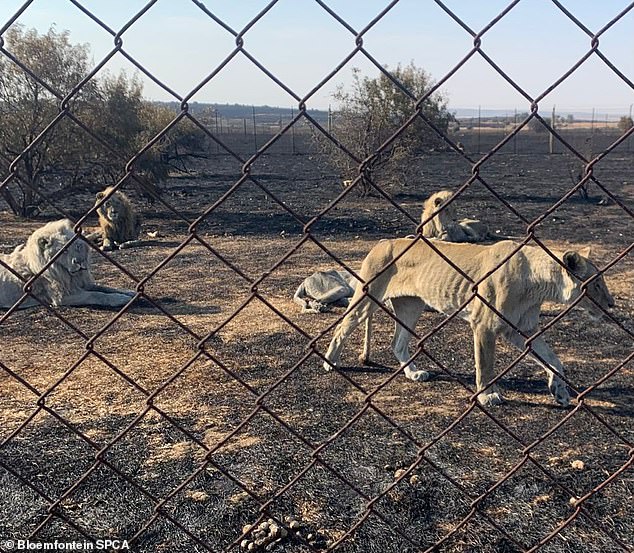 Welfare officers who discovered the big cat breeding centre, where a total of 59 lions and tigers were kept, as one of the worst animal cruelty cases they have ever seen (pictured: starving lions with their rib cages exposed in their burnt enclosure) 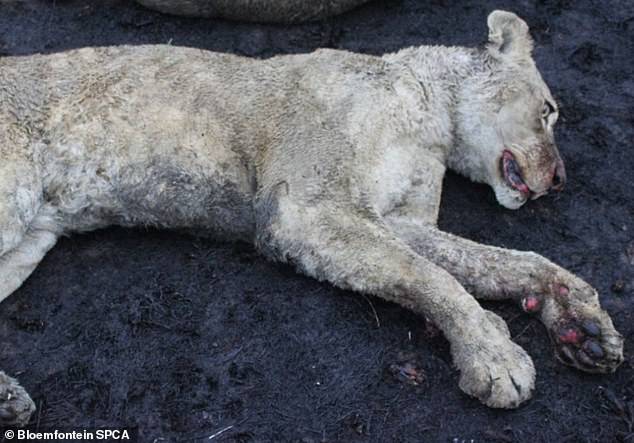 Many of the lions were too weak to stand after their paws and fur were burnt in the fire at the enclosure in the Free State, South Africa

Vets from the Society for the Prevention of Cruelty to Animals (SPCA), spent days treating their injuries, but 30 lions could not be saved.

SPCA inspector Reinet Meyer said: ‘What we found shocked us to the bone. As we entered the lion camps, we could only see the destruction left behind by the torturing flames.

‘We arrived at the lion enclosures and our hearts broke and our souls wept. We saw that the lions couldn’t escape the blazing fires and the inhalation of smothering fumes were evident.

‘The lions didn’t move. They all laid in one spot with their paws turned upwards. Their fragile bodies were burnt, and their faces carried the devastating scars of the flames just days ago.

‘Three male Lions, supposed to be Kings of the Jungle, in one of the camps, couldn’t stand at all. As they attempted to get up, they simply collapsed over and over. One cannot begin to comprehend the pain these lions were in.’

The SPCA said it has only just released the details of the scandal because it was awaiting vet reports and cost analyses to be added to a criminal docket which was opened against the farmer.

When they arrived at the farm and asked to be allowed to inspect the lions, the farmer asked if they had a search warrant.

‘We contacted the owner to find out if he had any damage on his farm with the animals. He said, no, there was no damage,’ Meyer told Times Live.

‘But we went back the next day because of the way the place had burnt. There was no way that the animals wouldn’t have been affected.’

When they came back the next day with a warrant they urged him to get a vet to look at the animals.

‘We gave him a warning to get treatment for the animals from a veterinarian. The next day he got a vet and the vet told us the animals weren’t injured that badly, [that] it’s like a dog walking on a tar road and getting some burn damage, but it’s not so bad. So he just gave pain medication to 11 of the lions which, according to him, would last three days,’ Meyer said. 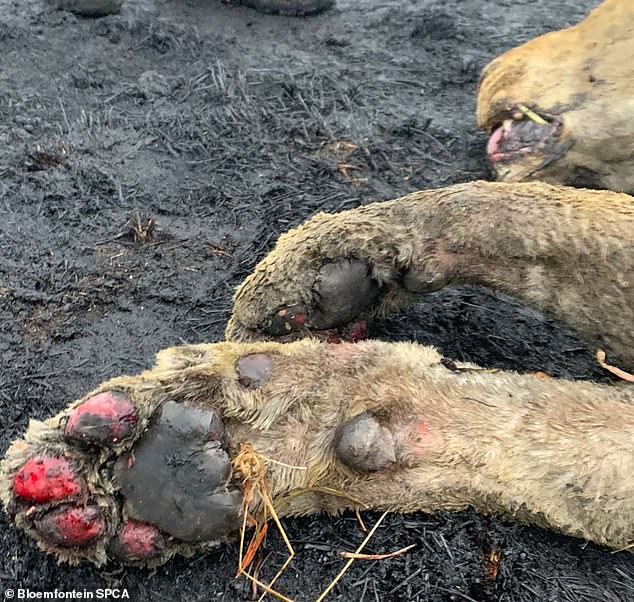 The lions had painful, festering wounds on their paws after the fire tore through their compound 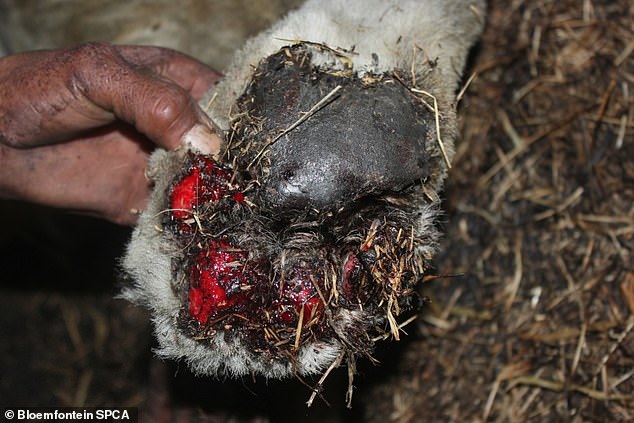 She said the report by the private vet, who has a practice in Bloemfontein, was questionable and that other vets said the pain medication would have only lasted 24 hours maximum.

Three days later, the SPCA returned with their own vet and discovered the horrifying scene had not improved.

It was then that they started treating the animals and soon realised that many would have to be put down.

Around 12,000 lions are kept in captivity in South Africa, four times the wild population, where they can be legally monetised.

Cubs are often separated from their mothers at birth so that tourists can pet and feed them.

Adult lions and often tigers are bred for so-called ‘canned hunting’ where they are released into an enclosed area for hunting.

Hunters pay tens of thousands of pounds to kill their chosen species with the help of local guides.

Their bones are then sold on a quota system to the Asian market where they are used for medicines and trinkets.

Animal cruelty is regularly reported, however convictions are rare.