A 41-year-old Louisville woman’s home burned down on Christmas. She was known for cooking for activists supporting Breonna Taylor, and the community is raising money to help her rebuild. 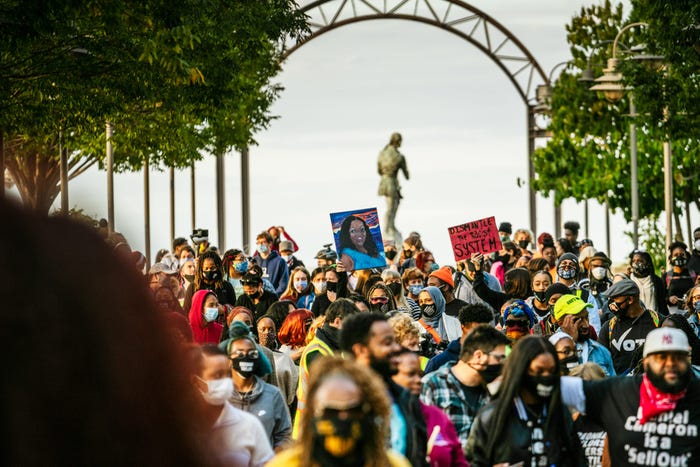 Chaunda Lee is well-known as a "pillar" in Louisville, Kentucky, for feeding demonstrators during Breonna Taylor protests.

On Christmas day, her house burned down in a fire.

Lee and her family members weren't home at the time and no one was injured, WHAS-TV reported.

Firefighters responded to the fire around 7 p.m. and it took nearly half an hour to distinguish it, according to the local ABC affiliate.

The fire devastated Lee — who does not have home insurance — and her family, who recently overcame challenging times.

"I just came from being homeless — like just two years ago I was homeless," Lee told WHAS-TV. "Me and my kids was on the streets."

As the Louisville Courier-Journal reported, Lee supplied Breonna Taylor protesters free food and was known for helping others.

"If you've visited Jefferson Square Park within the last six months, you've most likely been fed and fueled by Ms. Chaunda Lee," a photojournalist who captured images of the protests, Jon Cherry, wrote in an Instagram post on Sunday. "Ms. Chaunda has toted her home-cooked meals around the city, day in and day out, for countless activists, medics, media, and community members. Consistent and caring as ever, no one is able to resist the nurturing + nourishment that this protest pillar serves up."

Lee made a GoFundMe that has amassed more than $21,000 since it was created 2 days ago.

"Happy Holidays to everyone. I hate asking for any help but right now I'm in desperate need," Lee wrote on the fundraising page. "I've lost everything I owned in this house tonight."

Breonna Taylor's death sparked protests not only in Louisville but across the country after police fatally shot her at her home in March.