A horrendous act 25 years ago led to much-needed change, but we must remain vigilant

This week 25 years ago, a man The Age has chosen not to name killed 35 people and wounded 23 at the Port Arthur Historic Site in Tasmania. It was a day that horrified Australia and which has had a profound long-term impact here and abroad. For those personally touched by the mass shooting, the April 28 anniversary will evoke grim memories.

Former prime minister John Howard, who had been elected only 48 days earlier, ensured that the legacy of Port Arthur went beyond a story of personal trauma and healing when he rushed through the most extensive tightening of gun laws in the nation’s history. 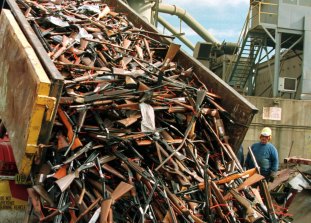 A truck unloads prohibited firearms at a scrapmetal yard in 1997 after the Port Arthur massacre a year earlier.Credit:Reuters

With the backing of his deputy, the late National Party leader Tim Fischer (who faced a fierce backlash in regional areas), and the then Labor opposition leader, Kim Beazley, the National Firearms Agreement was enacted to strengthen gun-owner licensing and firearm registration. In conjunction, a mandatory buyback of newly prohibited firearms was implemented. Under this scheme, more than 650,000 firearms were bought and destroyed over an 18-month period.

The result was immediate and long-lasting. In 1996, the year of the Port Arthur massacre, 516 people died as a result of firearms. Within two years, that number had dropped to 312. In Victoria, the rate of civilian firearm possession for each 100 people fell from 18 in the year before the shooting to 11 within five years.

Even today, the figures demonstrate the positive impact of those laws. University of Sydney data shows the proportion of Australians who hold a gun licence has fallen by nearly 50 per cent, although the number of guns each firearm owner possesses has increased.

But it’s not all good news. In a special Age report in 2015, it was revealed that police were finding guns in cars every two days in Melbourne’s north-west. Firearm-related incidents such as drive-by shootings were occurring every six days and there was an increasing trend of children as young as 16 carrying guns.

The Port Arthur gun laws are also being slowly eroded. According to Professor Joel Negin, who heads the School of Public Health at the University of Sydney, gun silencers, which were prohibited by the National Firearms Agreement, are creeping back in. He also notes that previously banned semi-automatic and other rapid-fire weapons and their ammunition are now more available to those who want them and that the nationally agreed ban on gun ownership by people aged under 18 is ignored by every state and territory.

This gradual rollback should raise concerns. Australian civilians own more than 3.5 million registered guns and more than 200 people die each year as a result of firearms.

Thankfully, since the Port Arthur massacre Australia has not witnessed another shooting of that scale. It is not by chance or luck. Keeping guns out of the hands of individuals who may wish to kill others is the responsibility of all governments. Gun laws do make a difference. The result of lax gun laws in America all too often makes for horrendous headlines.

This week is a time to remember those who died at the hands of a man wielding weapons that he should never have been allowed to own. In their memory, that lesson should never be forgotten.

The Age’s editor Gay Alcorn writes an exclusive newsletter for subscribers on the week’s most important stories and issues. Sign up here to receive it every Friday.