London: Working holiday visas will be extended for Australians up to the age of 35 in the historic trade deal just agreed with Britain after Prime Ministers Boris Johnson and Scott Morrison offered last-minute concessions over dinner at Downing Street.

On Tuesday night AEST, Morrison and Johnson held a joint press conference to announce the in-principle agreement – which could boost the Australian economy by up to $1.3 billion each year and offer exporters new options to pivot away from the volatile Chinese market.

Prime Minister Scott Morrison said it was the most ambitious agreement that Australia had struck since its deal with New Zealand.

Prime Minister Boris Johnson said the deal marked a “new dawn” in the relationship, “underpinned by our shared history and common values”. 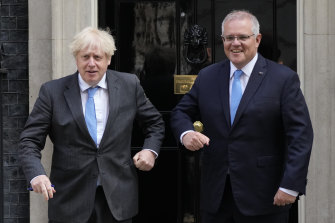 Morrison and Johnson thrashed out some of the final barriers to the new economic pact during a three-hour dinner at the British Prime Minister’s official London residence on Monday evening, where Johnson served Welsh lamb and Scottish salmon, and Morrison presented a hamper of Australian food and a Vegemite-themed surfboard.

Details of the in-principle agreement will be fleshed out before it is passed by parliaments in both countries.

It will likely take effect from mid-next year.

The Australian deal – Britain’s first since it split from the European Union on January 1 – also gives Johnson a big symbolic victory as he seeks to soften the economic costs of Brexit through new agreements with other trading partners.

The deal will increase the working holiday visa age limit from 30 to 35 and give Australians and Britons a total of three years to live and work in each other’s countries.

The UK government succeeded in removing the rule that obliges Brits on12-month working visas in Australia to work for 88 days on farms if they wish to stay another year. A new agriculture visa will be created instead.

Nationals deputy leader David Littleproud, who has claimed scrapping that rule could lead to a loss of up to 10,000 farm workers a year, said on Tuesday his party would fight for a new visa subclass to encourage farm work if the change was made.

The agreement will also mean a raft of professional qualifications gained in one country will be recognised in the other.

Fears that the signing might be delayed by a squabble over how much Australian beef and lamb would be allowed into the UK proved unfounded, with the two leaders settling on a scheme which will phase out tariffs over 15 years.

“When it comes to tariffs, we have a constituency-based electoral system which sees farmers heavily concentrated in Conservative backyards. The fact we are discussing duty free and quota-free trade is something that will have shocked everyone.”

Australian agricultural exports are worth $50 billion annually but only $700 million goes to the UK.

As part of the deal, the federal government will scraps tariffs on a range of British goods including whisky, which current has a tariff of 5 per cent. Tariffs will also be dramatically slashed on pharmaceuticals, cars, machinery and tractors. Britain will also gain greater access to Australian markets for services.

Federal Trade Minister Dan Tehan told Federal Parliament that when Britain had turned its attention to the common European market decades ago, Australia felt that a special bond was broken.

“Half a century on, Australia stands ready again to be a willing partner with the UK,” he said.

“We want to help the UK achieve their aim of global Britain, like we want them to make sure that they work with us to promote trade liberalisation. To be advocates for free trade right across the globe.”

The sensitivities in Britain over Australian agricultural imports point to difficult negotiations ahead with America, one of the world’s largest food producers.

Protectionist forces within the Conservative Party have claimed an open-slather deal with Australia would set a precedent for future negotiations with Washington.

“This deal is a crushing defeat for the self-serving protectionist lobbyists and a resounding victory for the Australian and British people,” said Matthew Lesh, head of research at the London-based free-market Adam Smith Institute.

The full potential of the deal will only be realised after Australia opens its border to vaccinated travellers.

While Britain has struck economic deals with other countries since the Brexit referendum, for example with Japan and Canada, these have been carry-over deals securing for Britain the same trading arrangements it enjoyed when in the European Union.

Former Australian prime minister Tony Abbott, one of 12 advisers on the new-look UK Board of Trade, cautioned protectionists against trading in “fear, not hope”.

“It baffles me a little that so many people in Britain are always running the country down,” he told GB News.

Morrison will now travel to Paris to meet French President Emmanuel Macron and former Australian finance minister Mathias Cormann, the new secretary-general of the Organisation for Economic Co-operation and Development, before returning to Canberra.