‘A win-win’: Parts of Northcote public golf course set aside for community use

A section of Northcote’s public golf course will be freed for community use in a small win for residents, who have been campaigning to reclaim the green space since the height of the COVID-19 pandemic.

The City of Darebin will also seek to restrict golfers from accessing the greens after 3pm as it renegotiates a golf course management contract for the site, opening up the space for picnics, sports, and other recreation. 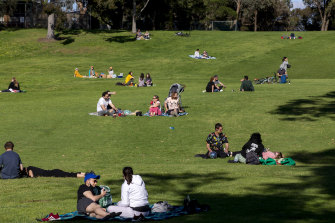 The Northcote Golf Course was opened up as a recreational space during last year’s Melbourne lockdown. Credit:Wayne Taylor

Mayor Lina Messina said the decision, which followed more than two hours of public submissions and deliberations on Monday night, was unlikely to please everybody, but was “the best we can achieve at this particular time”.

As part of the plan, 5.72 hectares of land at the southern and northern ends of the course will be turned into local parks and linked by a shared path. The golf course will be also redesigned to keep its nine holes and the council will investigate ways to use the existing buildings for hospitality and events.

The project, expected to be completed in the next financial year, will cost the council about $1 million in design and construction work as well as an additional $100,000 a year in maintenance costs.

Among the other options considered by the council were keeping the area exclusively for community use and reducing the size of the golf course to six holes, opening up more space to residents.

Councillors Emily Dimitriadis and Gaetano Greco spoke against banning golfers after 3pm, arguing the move was ill-conceived and would create conflict between those playing the sport and residents.

“Why have we chosen 3pm? It’s a random number that’s just come up. This is an on-the-go amendment, not something that’s been considered,” Dimitriadis said.

The campaign to close the golf course and use the space as a community park gained traction during the pandemic when the state government banned playing golf and residents began using the area for walks, picnics, and recreation.

With the golf course lease due to expire in late June, the council put a call-out to the public in October for ideas about what to do with the space and was flooded with thousands of submissions from residents wanting to reclaim course.

After community debate about how the public can best use the 24-hectare spot erupted, Northcote state MP Kat Theophanous stepped in to propose a compromise and offered $200,000 towards the redesign of the site as a “circuit-breaker” to end the bickering.

Several residents attended the meeting on Monday night to raise questions and make emotional pleas for more green space, arguing ideas put forward by the community during the consultation process – such as the creation of an outdoor cinema or a mini-golf course – had not been considered.

Opponents of the proposal complained it prioritised a small number of golfers over the wishes of a large part of the local community and called for greater access to the coveted green space.

Resident Ruth Liston, who helped deliver more than 10,000 leaflets about the proposal to neighbours in the area, said the plan was “an expensive replication of what is already in place”.

“It puts us at great expense to council back to square one, with the large part of the local community shoved into a small park while loss-making golf continues,” she said.

However, North Community & Golf Hub spokesman Bill Jennings argued golf course could be economically viable only if it featured nine holes and opened seven days a week during daylight hours.

With Nell Geraets and Rachael Dexter