Delhi: India's top court ruled has ruled that the "limitless" internet shutdown enforced by the government of Prime Minister Narendra Modi in Kashmir for the last five months was illegal.

Repeated restrictions on assembly were an "abuse of power", the court found, and said Modi's administration must publish its orders to enable citizens to challenge them in court and restore government websites, hospital and banking services. "An order suspending internet services indefinitely is impermissible," the judgment reads. 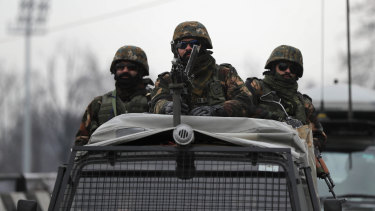 In a ruling that was critical of the government but stopped short of overturning the communication and transport restrictions that have been in place since August 5 when Modi scrapped nearly seven decades of autonomous status of Kashmir, the Supreme Court ordered the government to review them within seven days.

There was no mention of the political leaders – including three former chief ministers – who've been detained since the shutdown began.

The court held that the internet shutdown impacted the freedom of press, which is part of freedom of speech and expression.

"Journalists are to be accommodated in reporting and there is no justification for allowing a sword of Damocles to hang over the press indefinitely," the court said. 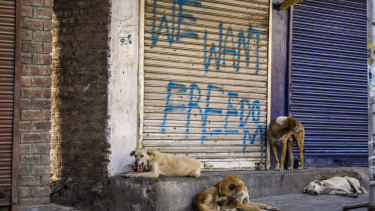 Stray dogs rest on the porch of closed shops with a graffiti written on it by Kashmiri Muslims in September.Credit:Getty Images

Ghulam Nabi Azad, a leader of the opposition Congress party, and Anuradha Bhasin, editor of The Kashmir Times, were the main petitioners in the case.

There is no justification for allowing a sword of Damocles to hang over the press indefinitely.

The Congress party said the court delivered the "first big jolt of 2020 to illegal activities of Modi's government by stating the importance of the internet as a fundamental right".

The people of Kashmir were waiting for this judgment, said Azad.

Ehsan Ali, a Kashmiri university student, said the court should have struck down government restrictions. "Even intention of restoring basic rights is sold to the people as a relief," Ali said.

Harsh Pant, professor of international relations at King's College London said "on its own, this order may not lead to any substantive operational change in Kashmir – the court seems to have given just enough relief to the government and the civil society groups.

"The state can always cite national security and prevailing peace in the region to continue its clampdown. But it may at least free the internet for essential services."

The verdict will be a disappointment for Modi's government, which is fast tracking implementation of his party's Hindu nationalist agenda after winning a sweeping mandate for his second term last year. His surprise announcement to revoke the special status of Kashmir – India's only Muslim majority state – was the first among the three significant acts affecting Muslims in the last year.

In November the Supreme Court handed a victory to Hindu groups over Muslim petitioners in a centuries old dispute over the ownership of a plot of land in northern city of Ayodhya, which was claimed to be the birth place of Hindu god Ram. A medieval era mosque that stood at the disputed site was demolished by a Hindu mob in 1992.

The latest move that's prompted weeks of protests across the country is the introduction of a religion-based test in the citizenship law that allows migrants of all faiths except Islam from neighbouring countries to seek Indian citizenship. Large scale demonstrations and police crackdown on protesters has left more than a dozen people dead and the country deeply divided on religious lines.

During the hearing, the government said it had relaxed restrictions in a phased manner. Petitioners, which included journalists, politicians and students, had cited difficulties in accessing basic services such as hospitals and schools, and mass arrests, and claimed the lockdown was illegal.