Accounts by German soldiers reveal how they experienced D-Day

D-Day through the eyes of the Nazis: Fascinating accounts by German soldiers reveal how they experienced one of WWII’s defining moments as they were overwhelmed by the Allies

From Saving Private Ryan to The Longest Day – dozens of films have immortalised the exploits of Allied troops on D-Day as they fought their way into France in the beginning of the end for Hitler and the Nazis.

But a new book documents the invasion from the point of view of the Germans as their lines were overrun by the largest amphibious invasion ever launched.

Interviews with dozens of Nazi troops lay bare the fear permeating German ranks before the battle, their sheer disbelief at the scale of the Allied attack when it arrived, and the horrors of the fight itself – both those inflicted by the Germans and those they suffered in return.

Soldiers told of watching their comrades burned or shot to pieces in front of them, others recalled cutting down American troops with withering machine-gun fire – only stopping when the gun got too hot – while one witnessed Polish conscripts turn on their German commander and kill him rather than fight any longer. 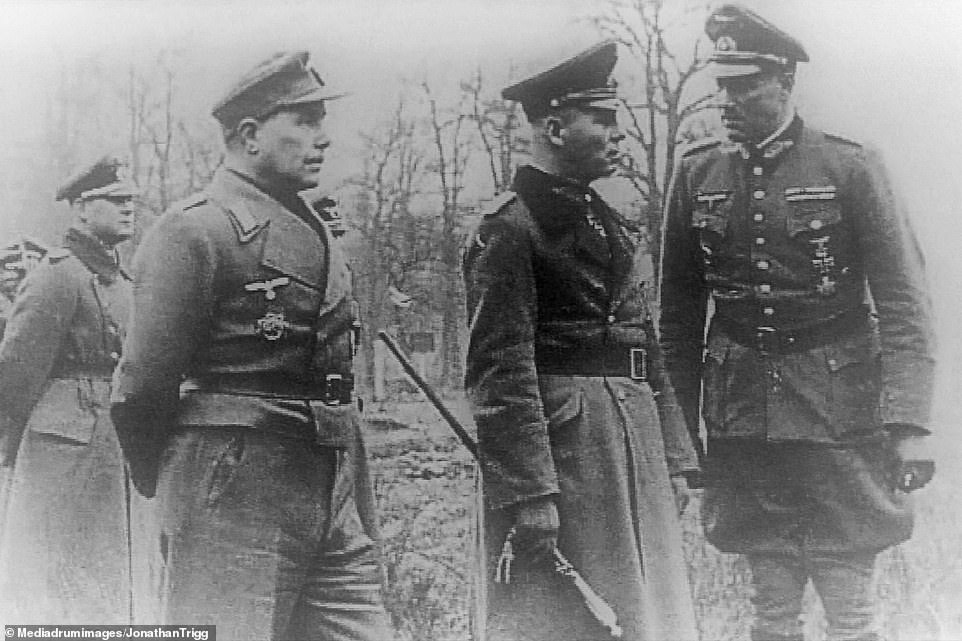 One of the Third Reich’s foremost military thinkers Erwin Rommel inspects A Nazi Panzerdivision on May 8, 1944, just weeks before D-Day. On D-Day itself, anticipating that weather would be too poor for a landing, Rommel was actually in Paris with Hitler. A new book documents how his under-equipped and ill-trained men were unable to repulse the Allied assault 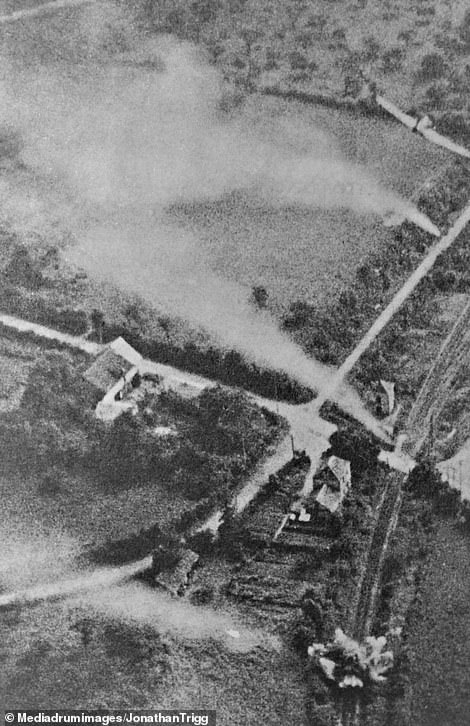 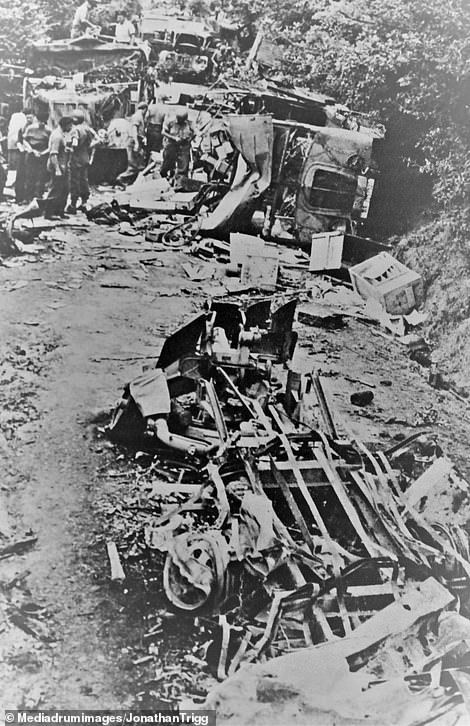 Before Allied troops even came ashore, the Germans suffered a bombardment from Naval ships positioned offshore along with strafing and bombing runs from Allied aircraft (view from the air, left, the devastation, right). One German soldier recalled how the explosions were so loud his nose ran with blood 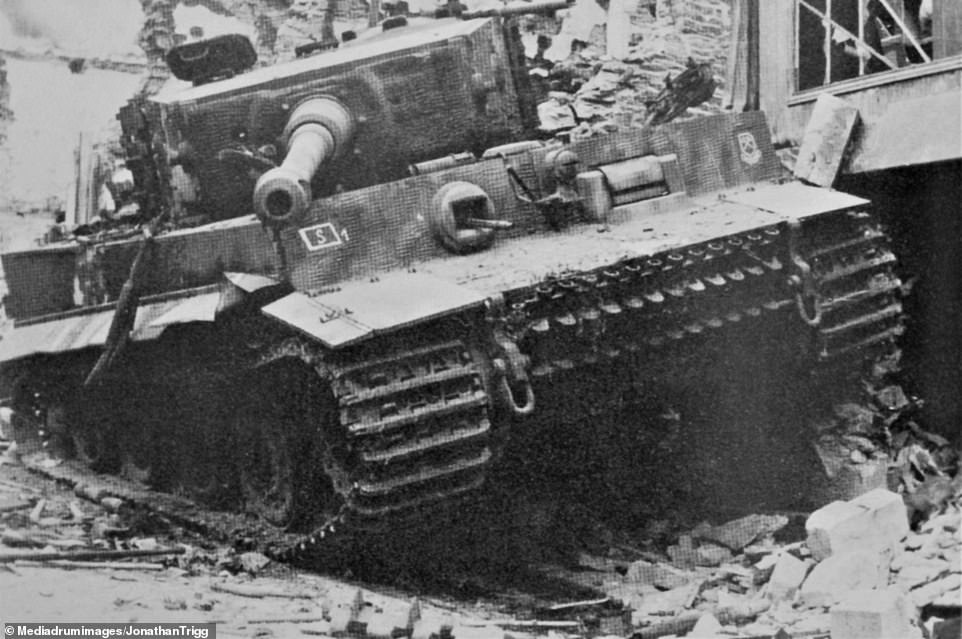 While German defensive positions in some areas were hit hard by the Allied assault (pictured), those on Omaha remained largely intact and allowed the Nazis to inflict heavy casualties on the Americans coming ashore. One told of how he fired 150,000 round that day, only stopping when his gun became too hot to fire

Their accounts are recorded in D-Day Through German Eyes: How the Wehrmacht Lost France, by Jonathan Trigg.

While the Allies conducted extensive decoy operations in the lead-up to the invasion to keep the Germans guessing about the exact timing, there was little doubt that an invasion would come sooner or later.

Klaus Herrig, 21, spoke of his fears about the attack, and the gnawing suspicion that Germany would be defeated when the Allies eventually reached mainland Europe.

He said: ‘Some fools believed that Germany could still win the war, but I wasn’t among them.

‘I couldn’t believe it by then. I think about half my comrades felt as I did. Everyone could see that we weren’t invincible, as we had always been told…

‘We expected the invasion to come that summer and waited for it with mixed feelings … I knew I had to do my duty as a soldier, but in my innermost heart I just hoped for it to be over.’

For Herrig, that day would finally come at dawn on June 6, 1944, when – after a 24-hour delay because of bad weather – Operation Overlord was launched.

Heinrich Runder, a German soldier, recalled his feeling on seeing the invading forces as being one of ‘pure fear’. He said: ‘A vast number of ships. Absolutely vast.

‘I can tell you that my throat went dry, painfully dry, and my hands began to shake. I wasn’t the only man to be affected that way, one of the very young lads began to retch as if he was going to be sick.’

The Allied beach landings were accompanied by a fierce bombardment from ships offshore, along with bombing runs by aircraft that were designed to knock out German machine-gun nests and artillery emplacements.

Grenadier Heinrich Runder described it. ‘I could feel the blasts which made my ears ring and my nose bleed,’ he said.

‘I could see the large bunker behind us…One of the rockets struck it, and simply blew the bunker to pieces. The walls and roof all flew apart.’ 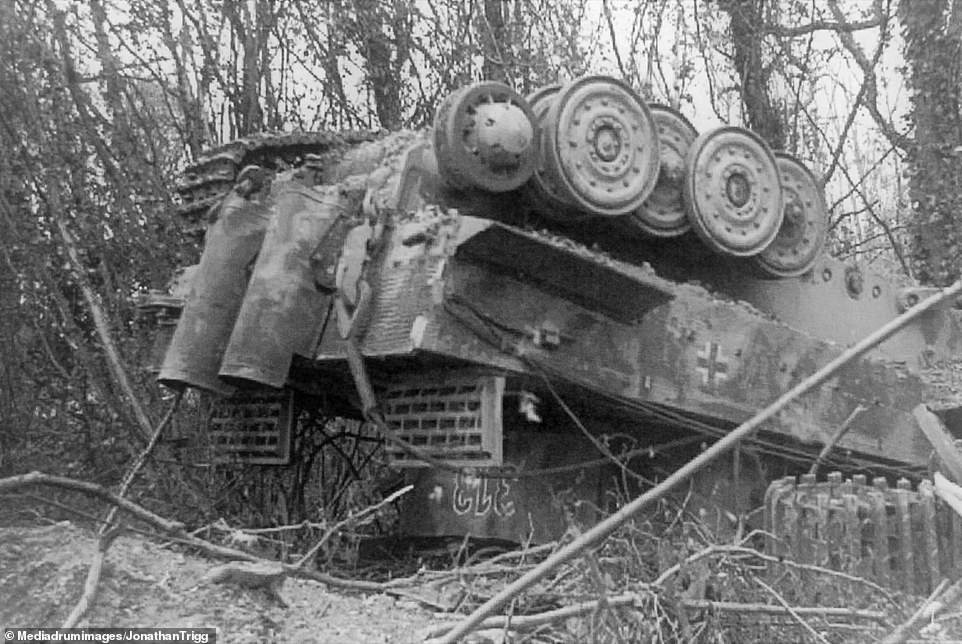 A Nazi tank blown upside down by Allied bombing. Two Nazis soldiers recalled the horrors of incendiary rockets fired by American Thunderbolt aircraft which were filled with petrol and tar to ensure the liquid stuck to the target as it burned. One man described a direct hit on a bunker as ‘a vision of hell’ 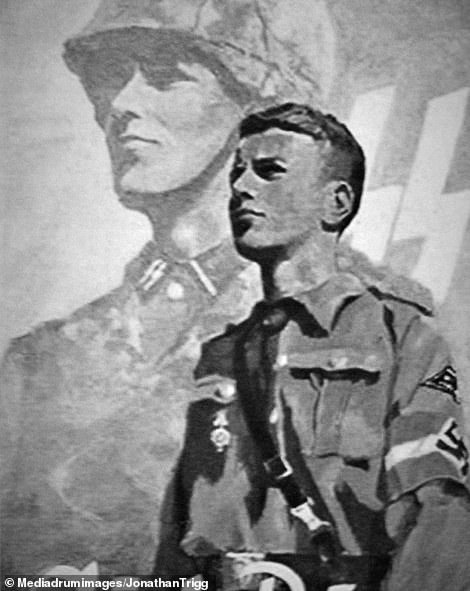 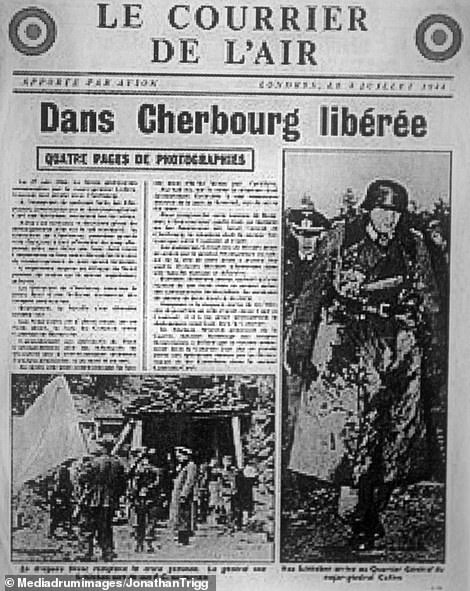 Despite Nazi propaganda painting Hitler’s army as invincible (left), those stationed at Normandy said that many of them realised they would be defeated when the Allies invaded, even if they didn’t know exactly when that would be. Right, a French newspaper announces the Allied victory 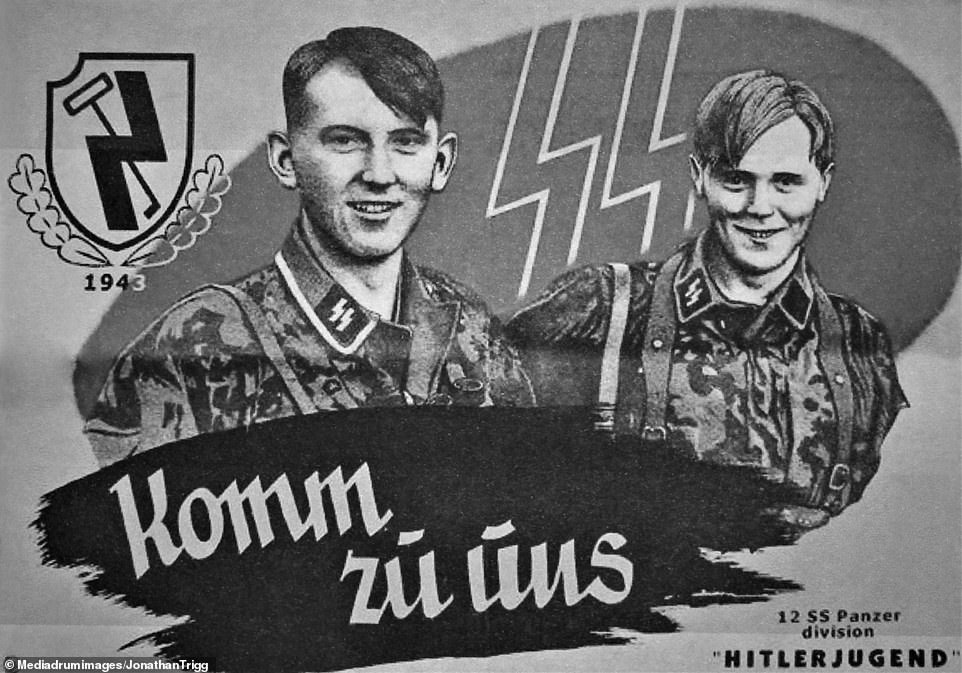 While some parts of the Nazi army were the most advanced in the world at the time, those stationed in Normandy on D-Day consisted either of teenage recruits with little training or foreign conscripts. One German soldier recalled seeing a platoon of Poles shoot their German commander rather than fight the Allies 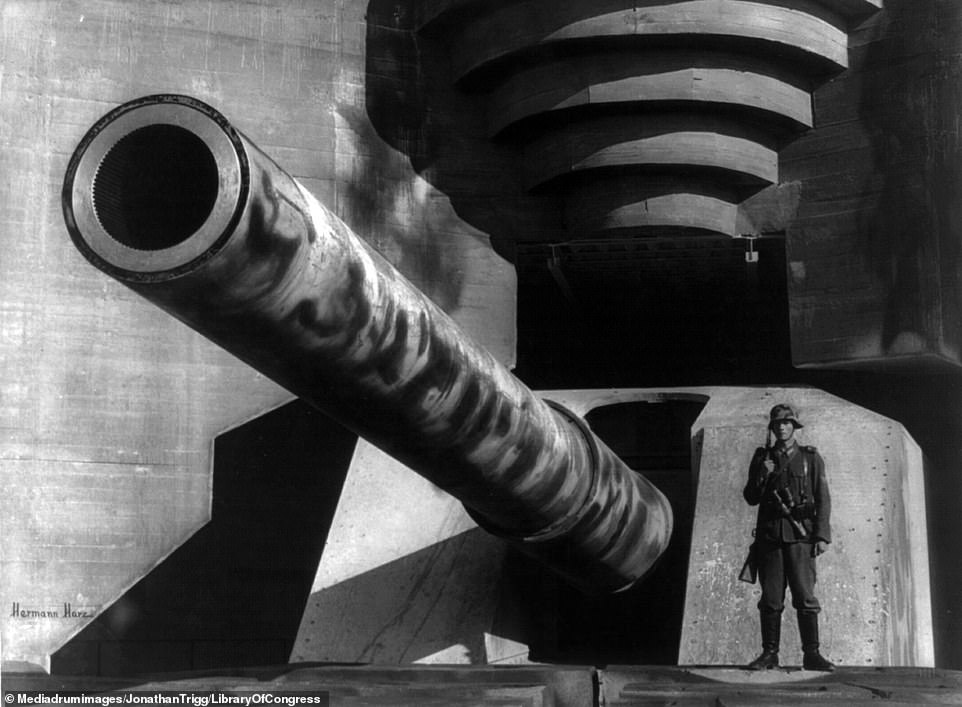 Others recalled a particular horror – that of American incendiary rockets fired by Thunderbolts aircraft – that were filled with flammable liquid mixed tar or rubber to ensure it stuck to its target as it burned.

Runder recalled the moment one struck his trench as ‘complete hell and chaos’, describing men running around on fire, or falling backwards into the flames to die.

Another soldier described a direct hit by one of the rockets on a bunker as ‘a vision of hell, an obscene sight that remains with me even now.’

While some German emplacements took heavy hits early in the fighting, those on Omaha beach – where US forces suffered most of their casualties – remained largely intact, spelling doom for many of the troops coming ashore.

Staff sergeant Henrik Naube, holed up in a machine-gun nest overlooking the beach, recalled: ‘The Americans were about four hundred metres away from us.

‘I did not sight on them individually at first, but I began firing and swept the gun from left to right along the beach. This knocked down the first few men in each line; the MG 42 was so powerful that the bullets would often pass through a human body and hit whatever was behind it.

‘So many of these men were hit by a bullet which had already passed through a man in front, or even two men…

‘The only time we stopped firing was when the gun barrel began to overheat, and the mechanism showed signs of misfiring. We didn’t want to run the risk of the gun breaking down, so we rested it to let it cool. We took up our rifles and used them instead.’

Karl Wegner found himself in a similar position. Describing his emotions as waves of men were cut down, he added: ‘My mind rationalised it; this was war. Even so it left a sour taste in my mouth.

‘But now was not the time to think of right or wrong, only survival… After the first few moments had passed my mind became automated…. When the gun jammed I would clear it quickly because every second counted…

‘When I pulled back the bolt for what seemed to be the thousandth time, I paused for a good look down the beach. I saw Amis [slang for American soldiers] lying everywhere.

‘Some were dead, and others quite alive… What I saw convinced me that, for the moment, it was worse down there than it was for us where we were, although we had taken – and were still getting – a pounding.’ 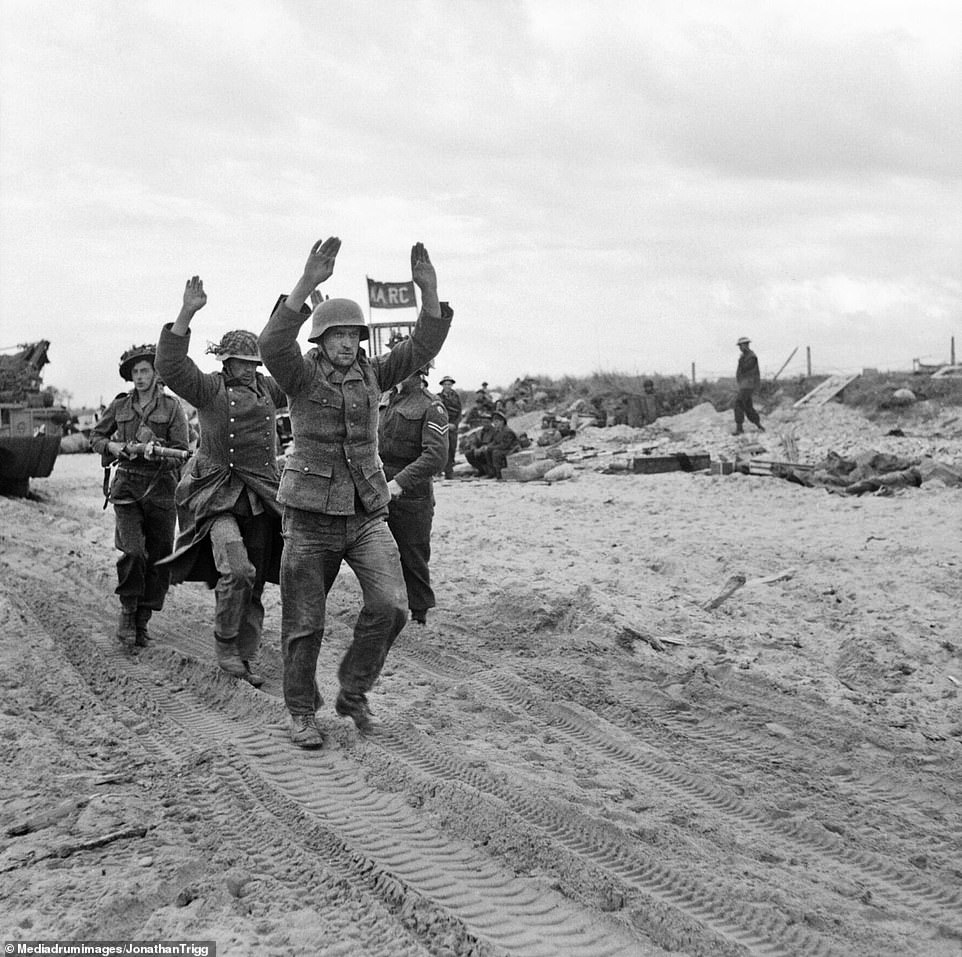 While some German soldiers managed to last through the morning of the assault, by midday they were running out of ammunition and overwhelmed by the scale of the Allied assault. As troops managed to find routes out of the beach killing zones and into the dunes, the Germans had little choice but to surrender 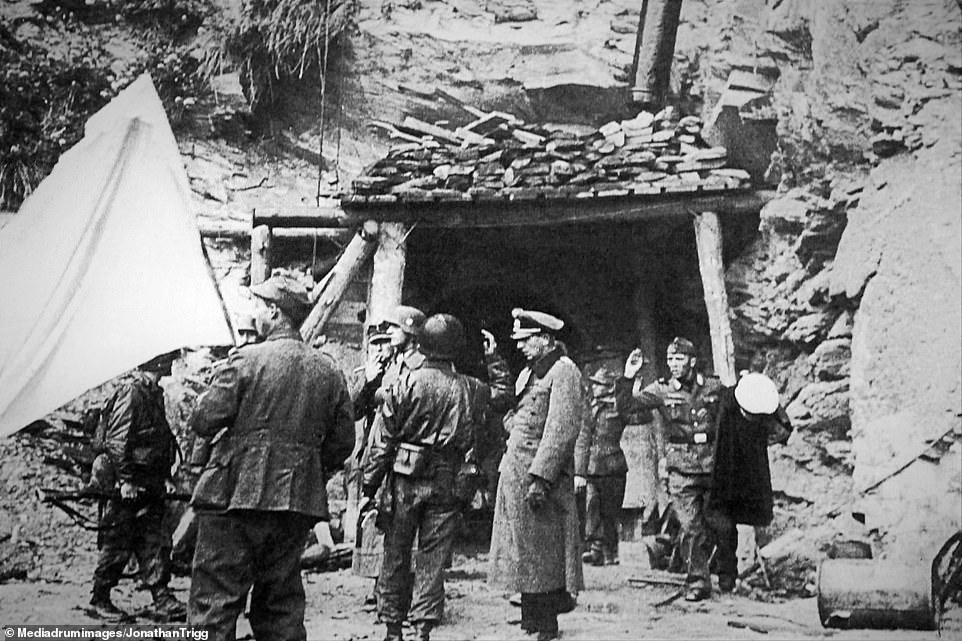 Nazi commander Karl-Wilhelm von Schlieben surrenders to the Americans. More than one Nazi soldier who defended the beaches said they were surprised at being taken alive, and had expected the Americans to shoot them on sight after so many of them had been gunned down on the sand 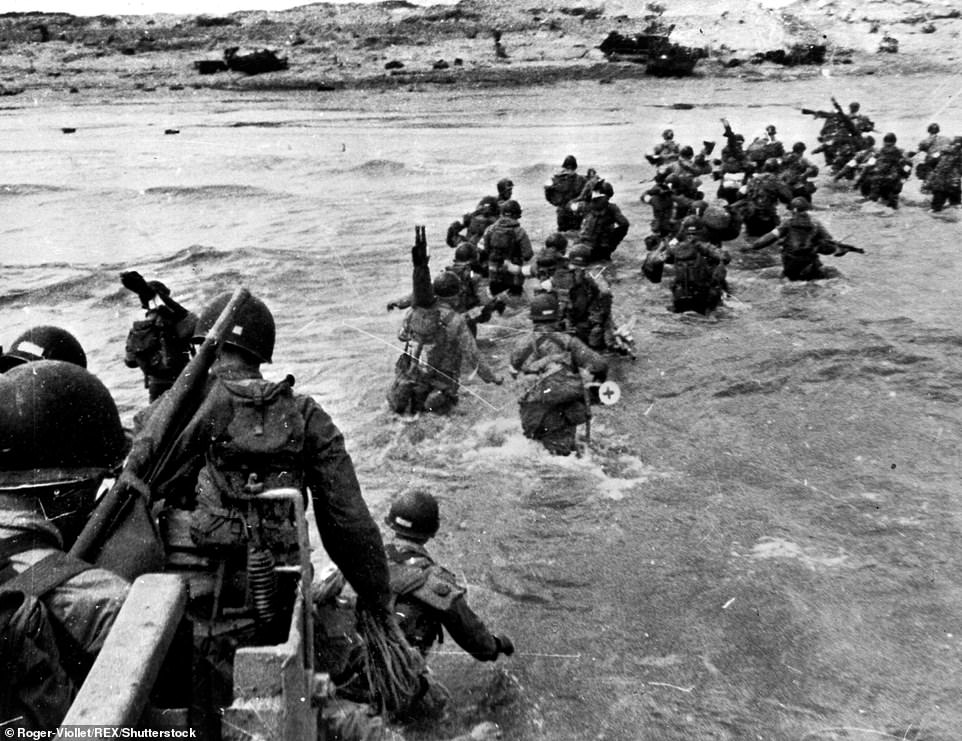 American troops come ashore at Utah beach, where a fierce Allied bombardment coupled with a tank assault ensured the German defences were breached within a couple of hours 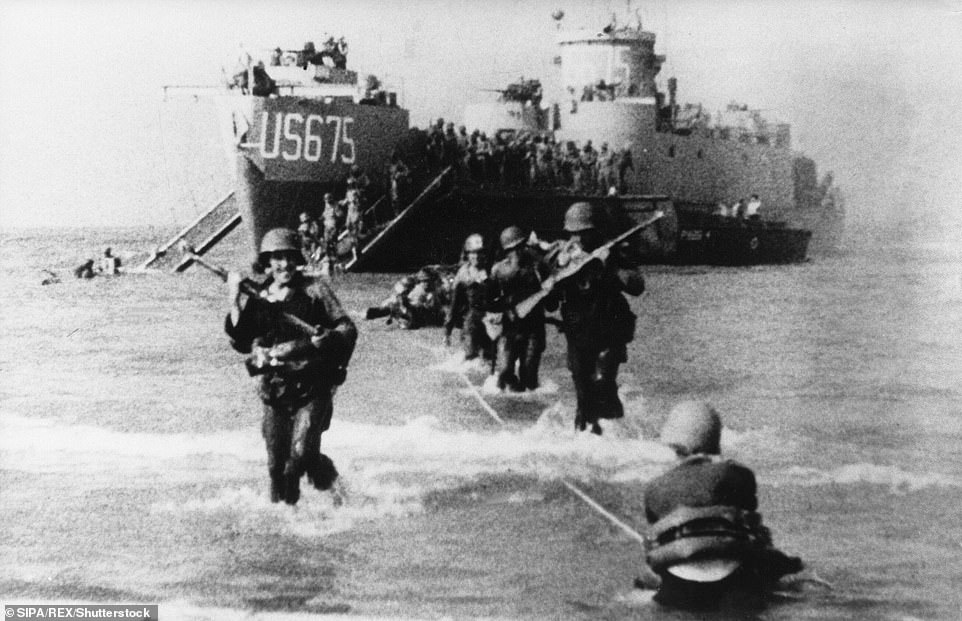 The Allies failed to capture any of their major objectives on the first day of fighting, but gained a toe-hold in Europe from which they were able to drive the Nazis back to Berlin, where they were crushed by Russian forces. Up to 10,000 Allied men are thought to have died on D-Day, while up to 9,000 Germans perished

Despite some successes at Omaha, it quickly became apparent that the German troops – largely inexperienced, under-equipped, and poorly commanded (Erwin Rommel was in Paris with Hitler that day) – were going to lose.

Ammunition was becoming scarce, especially in the machine-gun nests, and a counter-attack that would have brought reinforcements had either stalled or been repulsed.

As the defenders were picked off, Stefan Heinevezm, 20, recalled seeing the man next to him hit through the throat with a bullet before getting another in the chest, saying: ‘He was literally shot to pieces in front of me.’

A few moments later, an Allied aircraft strafed his position and cut a Russian solider – conscripted into the German army after Hitler attacked Stalin’s forces – in half.

‘The rest of us could only step over the two pieces as we ran on,’ he said.

Realising the day was lost, some conscripts refused to go down with the ship. One grenadier, Helmuth, recalled how Poles and Alsatians in his trench told the German commander surrender when the Americans attacked.

Refusing to surrender, the officer told them they would be shot if they refused to fight, prompting one of the men to put a bullet in his head. Helmuth, as the only German left in the trench, was beaten up and sent running.

Joseph Häger recalled fighting in a trench near Omaha for an hour – ‘the most terrible time in my life’ – before ending up in a bunker along with 30 wounded men as the Americans advanced.

With the Nazis troops trapped, the Allies began piling earth up against the vents before bringing up a flamethrower. Häger describes a near-mutiny before one of the men snatched a white blanket from a wounded man, tied it to a stick, and waved it in surrender.

Meanwhile Naube, knocked nearly-unconscious by a mortar round, found himself captured by the Americans – much to his surprise, as he expected to be shot on sight.

‘When I thought about the beach, the piles of bodies down there… I thought the enemy would kill us,’ he said.

‘Would we have shown them any mercy if the roles were reversed, if we were the attackers?’

It is thought up to 9,000 German troops died on D-Day compared with 10,000 Allied soldiers – though only 4,400 have been officially accounted for – in what was the largest amphibious assault ever mounted.

The Allies achieved none of their key objectives on the first day of fighting, but German defenders had failed to ‘throw them back into the sea’, as Rommel had promised to do.

With a toe-hold in mainland Europe, the Allies were able to work their way inland, driving the Nazis all the way back to Berlin, where Hitler’s forces were ultimately crushed by the Russians.