Activists scale Parliament calling for slavery reparations to be paid

Black Lives Matter and Extinction Rebellion protesters have draped a huge banner off the Houses of Parliament today as they called for reparations for slavery.

At least three demonstrators, wearing hi-vis clothing, hung the large letter ‘to the People of the United Kingdom’ from scaffolding outside the building.

The note demanded ‘an honest acknowledgement of the harm and human cost of slavery and colonialism’ and called for ‘truth and healing commissions’.

It also said there should be a ‘cancellation of all African debt’ as well as ‘reparations befitting equals’.

The move comes three weeks after an activist dressed as Spiderman was arrested after scaling scaffolding next to Big Ben.

It has again called into question the Metropolitan Police’s security after XR were unchallenged when they held a protest at the Cenotaph on Armistice Day yesterday.

At least three demonstrators, wearing hi-vis clothing, hung the large letter ‘to the People of the United Kingdom’ from scaffolding outside the building

Onlookers today claimed the protesters had gained access to the building from the River Thames, with a police boat pictured on the scene.

The letter, signed by Africans Rising, XR and Black Lives Matter, called for help to ‘heal the wrongs of the past and to dismantle the racism of the present’.

It continued: ‘The tragedies of slavery and colonialism are not experienced by Africans alone.

‘The exploitation of people and the environment continued to cause suffering that is plain to see.

‘The brutal killing of George Floyd stemmed from this unbroken thread of systemic racism. You must have heard the world echo with the words of Black Lives Matter.’

The document added: ‘Britain was the largest colonises in Africa and across the globe.

‘It’s benefited from and perpetuated the salve trade and thus owns a particular responsibility to redress the injustices of the past. Constantly we appeal for these actions.’

The note had the Black Lives Matter fist at the top and the Extinction Rebellion Hourglass at the bottom.

Police used a boat to swoop on the Palace of Westminster at around 6.15am and engaged the activists.

The Metropolitan Police said: ‘At approximately 06:15hrs on Thursday, 12 November protesters gained access to the site of the Palace of Westminster.’

The statement added: ‘Officers are on scene and are engaging with the protestors. No arrests.’

Last month an activist dressed as Spiderman was arrested after scaling scaffolding next to Big Ben, putting up banners protesting about the coronavirus lockdown. 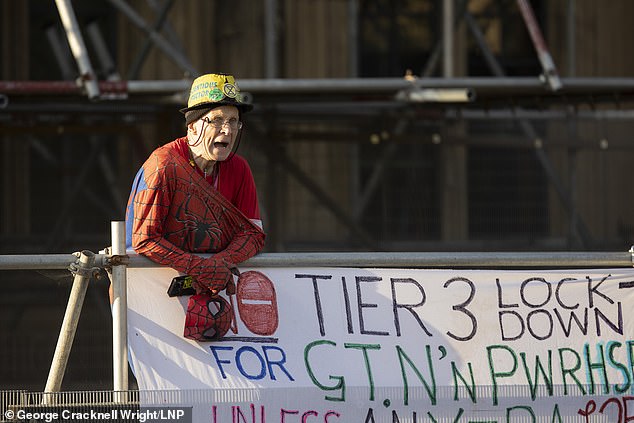 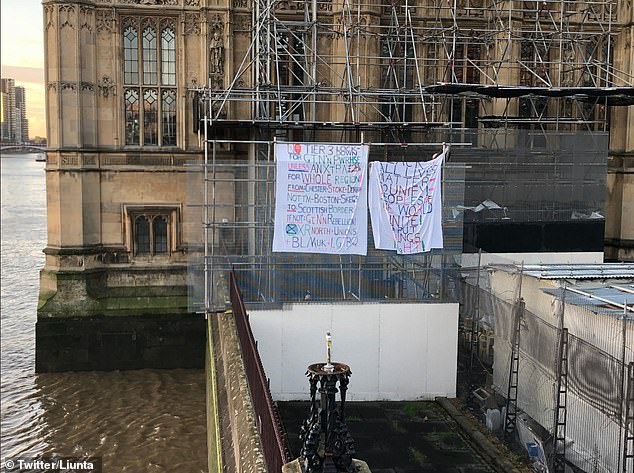 The man appeared to be urging the Government to give northern England an extra £2billion in funding before putting areas into the tier three ‘very high’ alert level.

The unidentified protester in his 60s made reference to extra support being needed for the likes of Chester, Stoke, Derby, Nottingham, Boston and Skegness.

He also included the names of activist groups including Extinction Rebellion and Black Lives Matter on his banners.

He came down before being arrested on suspicion of criminal trespass under section 128 of the Serious Organised Crime and Police Act 2005.