As Afghanistan begins a new era of Taliban rule, long queues outside banks and soaring prices in the bazaars of Kabul underline the multiple crises the Islamists must now deal with having recaptured the country at breakneck pace.

With cash reserves running low, aid organisations cutting off funding, and skilled workers fleeing by the thousands, the country’s economy is teetering on the brink of near-total collapse.

That has seen the value of its currency collapse even though hard notes are in short supply, while prices for basic goods have soared due to shortages, with the UN warning that food could run dangerously low within weeks.

The threat of hyperinflation now looms large and its effects could be lethal in a country where a third of the population survives on less than $2 per day.

And, in the background, lurks the threat of a serious Covid outbreak which medics say could prove ‘catastrophic’ with hospitals already overloaded and just 2 per cent of the population vaccinated.

Meanwhile at Kabul airport, which is now near-deserted after weeks of frenetic activity, Qatari technical crews arrived in the hopes of getting flights moving once again after air traffic control crews fled. 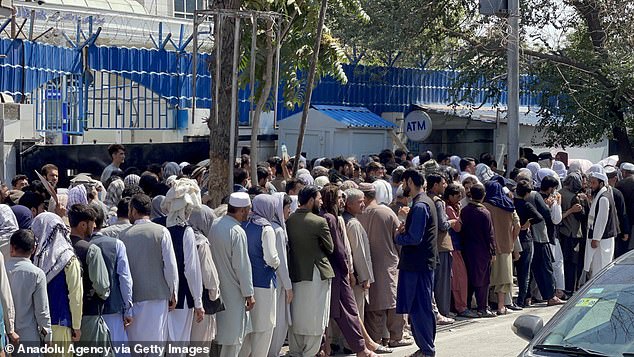 Afghans form a huge queue outside a bank in Kabul, with hard cash running in short supply meaning limits have been placed on the amount that can be withdrawn 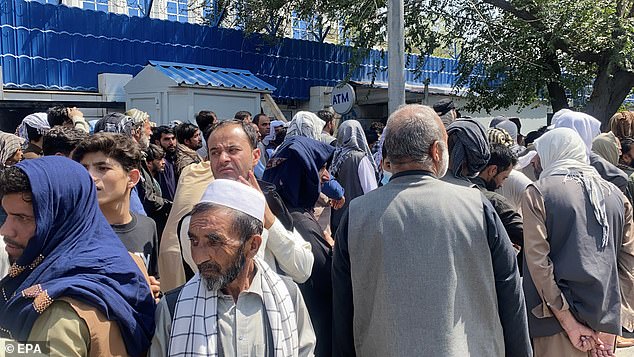 With salaries going unpaid for weeks, even well-off Afghans are struggling to feed themselves as prices of necessities soar 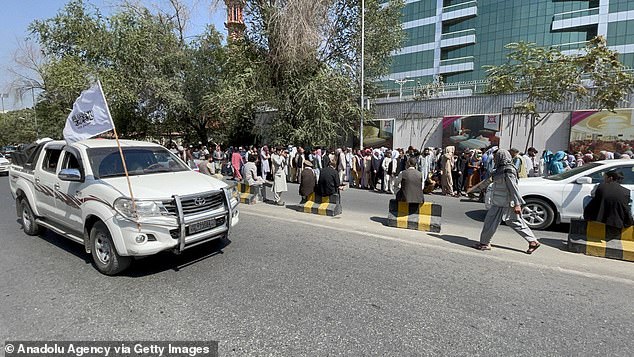 A Taliban vehicle drives past a queue of Afghans waiting outside a bank in Kabul, which has become a common sight since the Islamists took over

A source with knowledge of the Qatari flight said that the Taliban had requested assistance to reopen the airport, and that talks on exactly what kind of help they need is still ongoing.

The goal is to resume flights for both humanitarian aid and to provide freedom of movement including the resumption of evacuation efforts,’ the source said.

Away from the airport, Afghanistan’s cash shortage is perhaps the country’s most-pressing issue, with salaries of even relatively well-off Afghans going unpaid for weeks as business owners struggle to pay their staff.

Last month, the former head of the national bank revealed the amount of hard currency in the country is ‘close to zero’ with the majority of Afghanistan’s riches – thought to total $9billion – held in the US, where it is now subject to asset freezes.

The daily struggle to put food on the table has become an overwhelming preoccupation for Afghan civilians, with people willing to pay ever larger sums for the basics – causing prices to rise rapidly.

‘Everything is expensive now, prices are going up every day,’ said Kabul resident Zelgai, pointing to the price of tomatoes which cost 50 afghani on Tuesday but are now selling for 80.

In an effort to get the economy moving again, banks which closed as soon as the Taliban took Kabul have been ordered to re-open.

But strict weekly limits on cash withdrawals have been imposed, with people facing hours-long queues to access their money.

Outside the city, humanitarian organizations have warned of impending catastrophe as severe drought has hit farmers and forced thousands of rural poor to seek shelter in the cities.

People huddling in tent shelters by roadsides and in parks are a common sight, residents said.

In a cash-based economy heavily dependent on imports for food and basic necessities and now deprived of billions of dollars in foreign aid, pressure on the currency has been relentless.

The afghani was recently valued at around 93-95 to the dollar in both Kabul and the eastern city of Jalalabad, compared with around 80 just before the fall of the city.

But the rate is only an indicator, because normal money trading has dried up.

In the Pakistani city of Peshawar, close to the border, many money traders are refusing to handle the Afghan currency, which has become too volatile to value properly.

Only the sheer scarcity of cash has kept it from falling further, with international shipments of afghanis and dollars – which were paused as the Taliban’s army swept across the country – yet to resume.

‘In the bazaar you can exchange for a bit over 90 but it goes up and down because it’s not official,’ said one trader.

The fall in the exchange rate has seen prices for many basic foodstuffs ratchet up daily, squeezing people who have seen their salaries disappear and their savings put out of reach by the closure of banks.

Kabul market traders said a 50 kg bag of flour was selling for 2,200 afghanis, around 30 per cent above its price before the fall of the city, with similar rises for other essentials like cooking oil or rice.

Prices for vegetables were up to 50 per cent higher, while petrol prices were up by 75 per cent.

Those reliant on money transfers from relatives living abroad have also found themselves cut off by the closure of money transfer operators like Western Union.

Increasing numbers of people have been trying to sell jewellery or household goods, even if they have to accept a fraction of their value.

‘Two weeks ago, people were buying but the situation now is not good and no one is buying,’ said one vendor.

‘People’s money is stuck in the banks and no one has money to buy anything.’

Taliban officials have said the problems will ease once a new government is in place to restore order to the market and have appealed to other countries to maintain economic relations. But the structural problems run deep.

Even when its economy was floating on a tide of foreign money, growth was not keeping pace with the rise in Afghanistan’s population.

Apart from illegal narcotics, the country has no significant exports to generate revenue, and aid, which accounted for more than 40 per cent of economic output, has abruptly disappeared.

A new central bank chief has been appointed but bankers outside Afghanistan said it would be difficult to get the financial system running again without the specialists who joined the exodus out of Kabul.

‘I don’t know how they will manage it because all the technical staff, including senior management, has left the country,’ one banker said. 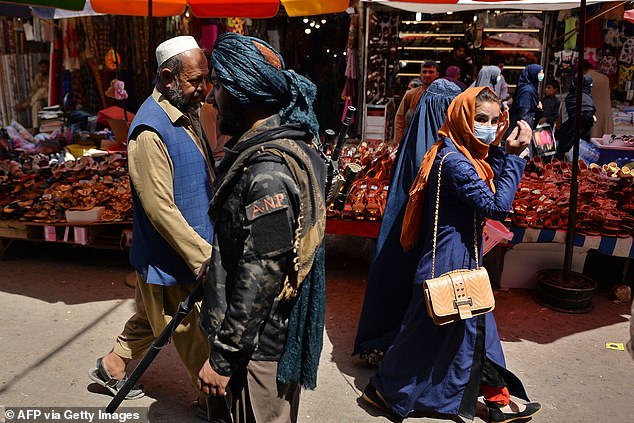 A Taliban guard walks through a marketplace in Kabul, where prices for basic items have been rising rapidly as food already starts to run low 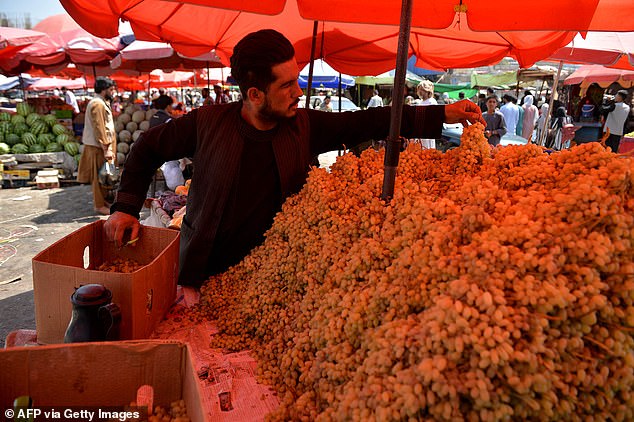 A fruit vendor unloads grapes at a market in Kabul, as people complain prices are rising rapidly with the threat of hyperinflation looming

In a sign of the pressure on Afghanistan’s currency reserves, the Taliban have announced a ban on taking dollars and valuable artefacts out of the country and said anyone intercepted would have their goods confiscated.

To add to the problems, a recent suicide attack by an Afghan offshoot of Islamic State on crowds waiting to get a place on evacuation flights brought a chilling reminder that the bombings that were a regular feature of life in the past may not be over.

‘The market situation had slightly improved in the last few days,’ said one vendor at a Kabul street market where people sell household goods to raise cash. ‘But it completely collapsed after the suicide attack near the airport.’

The Taliban have yet to name a new government or reveal how they intend to govern, unlike in 1996, when a leadership council was formed within hours of taking the capital.

The foreign minister of neighbouring Pakistan, which has close ties to the Taliban, said on Tuesday he expected Afghanistan to have a new ‘consensus government’ within days.

In the absence of a government in Kabul, Britain and India held separate talks with Taliban officials in Doha, amid fears that up to half a million Afghans could flee.

Washington said it would use its enormous leverage, including access to the global marketplace, over the Taliban as it seeks to get the remaining Americans and allies out of Afghanistan after its military withdrew.

High on victory and back in power, some Taliban leaders mocked the United States.

‘Your power is gone, your gold is gone,’ Anas Haqqani, who has emerged as one of the group’s most prominent leaders, said on Twitter.

Haqqani posted a photograph of himself holding discarded prison shackles on Wednesday as he toured Bagram prison, where he spent years kept in solitary confinement by U.S. forces.

Still, Afghanistan desperately needs money, and the Taliban are unlikely to get swift access to the roughly $10 billion in assets mostly held abroad by the Afghan central bank.

‘If the international community wants to prevent an economic collapse, one way would be to allow Afghanistan to gain limited and monitored access to its reserves,’ Shah Mehrabi, an economics professor at Montgomery College in Maryland who is on the board of the central bank, told Reuters.

‘Having no access will choke off the Afghan economy, and directly hurt the Afghan people, with families pushed further into poverty.’

Last week, the United States freed the way to continue the humanitarian aid effort despite Washington’s blacklisting of the Taliban, a Treasury Department official told Reuters. 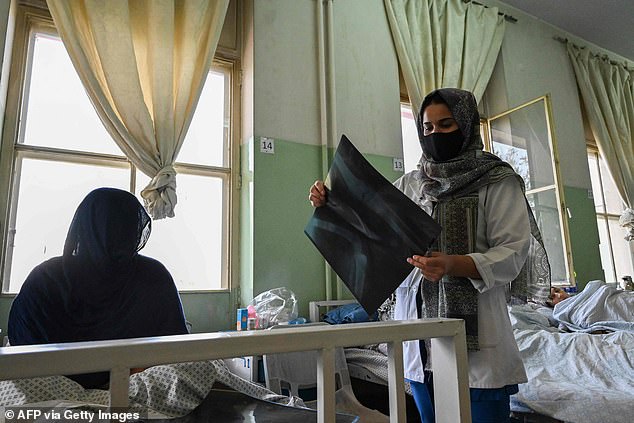 Health experts have also warned of the potential for a ‘catastrophic’ Covid outbreak in Afghanistan, where just 2 per cent of people are vaccinated 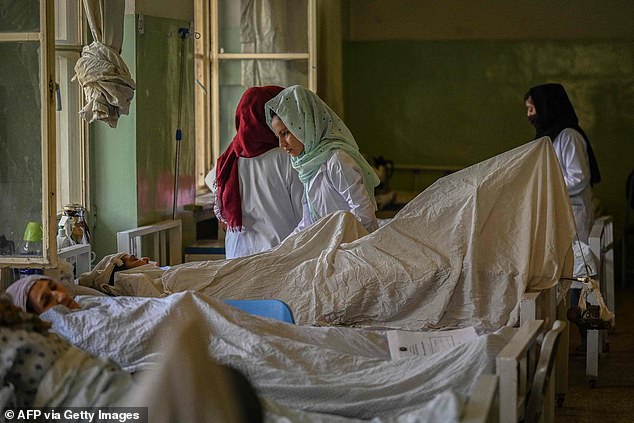