The barrister acting for a Sydney businesswoman accused of defrauding the National Australia Bank of millions has told a court that her alleged co-offender is an “accomplished liar” whose evidence should be rejected.

Helen Rosamond, owner of North Sydney-based event management company Human Group, is standing trial in the NSW District Court on charges relating to her alleged role in defrauding NAB of $15 million between 2013 and 2017. 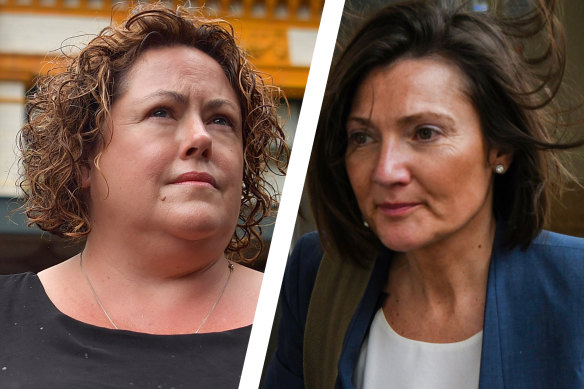 The trial before Judge Robert Sutherland is in its final stages and Crown prosecutor Katrina Mackenzie has delivered her closing address to the jury.

Mackenzie alleged Rosamond had an arrangement with Rogers, chief of staff to former NAB chief executives Cameron Clyne and Andrew Thorburn, under which Rogers approved inflated invoices from Human Group in exchange for kickbacks, including a house deposit, a $627,000 US holiday for eight people, a boat and a BMW.

Human Group had organised events for the bank and Rogers was authorised to approve payments of up to $20 million, the court has heard. Rogers gave evidence that it was “obvious” to her that NAB ultimately picked up the tab for her gifts.

The Crown alleges Human Group’s invoices also included personal expenses for Rosamond, including $228,747 for an interior designer to furnish her Potts Point terrace, tens of thousands of dollars in rent, $14,000 for a private caterer for her swanky 40th birthday and $372,611 to landscape her former home in Mosman.

On Wednesday, Rosamond’s barrister Dr Anton Hughes submitted that the jury should not accept the evidence of Rogers, a “demonstrated and accomplished liar”.

“She successfully deceived her employer for a period of at least five years. She managed to mislead everyone she worked with. She lied to her family,” he said.

The jury has heard Rogers was jailed in 2020 after pleading guilty to 27 counts of corruptly receiving a benefit and five of obtaining a financial advantage by deception.

The sentence was discounted in light of her early guilty plea and her agreement to give evidence in Rosamond’s trial, the court has heard. Hughes suggested this gave Rogers a “very real incentive” to lie.

He submitted there was “no direct evidence” of an agreement between Rogers and Rosamond, and Rogers herself had not suggested an “explicit” agreement.

“You can’t find a joint understanding on the basis of one person’s perception. I suggest the reason Ms Rogers turns her perception into an agreement is a justification … to make her … feel less guilty.

“If there truly was a joint agreement … I suggest it would not make sense that Rosemary Rogers would have no idea about Ms Rosamond’s alleged charging of personal expenses to the NAB. They would be in bed together.”

The Crown has submitted Rogers “did not trick the accused”, and Rosamond was an “astute businesswoman” who wanted to keep Rogers “in her pocket”.

Hughes also submitted that documents tendered in the trial suggested Human Group provided services to NAB on a fixed-cost basis, meaning the bank would have “no entitlement” to be repaid any sum once the money was paid.