Almost Australian: the Georgia run-off candidate with roots down under

Washington: If Democrat Jon Ossoff wins the Senate run-off in Georgia, he will be the youngest person elected to the US Senate in 40 years.

The 33-year old will also have what is believed to be one of the closest personal connections to Australia of any member of Congress in American history.

Ossoff's mother, Heather Fenton, was born and raised in Sydney before moving to the US at the age of 23 and settling in the Atlanta area in Georgia. 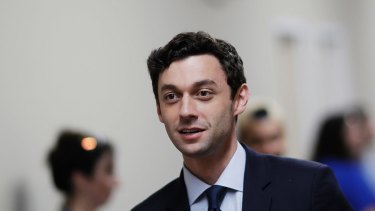 The Sydney Morning Herald and The Age understand that Jon Ossoff, the pair's only child, has travelled to Australia several times. He previously held Australian citizenship that has now lapsed.

While still at high school Ossoff, who was raised Jewish, interned for the late civil rights icon and Democratic congressman John Lewis before graduating from Georgetown University's School of Foreign Service in Washington D.C.

He has spent most of his career as a filmmaker and helped make several documentaries about politics in Africa and terrorist group ISIS that aired on the BBC.

In 2017 he narrowly lost a closely watched congressional seat in Georgia but won pre-selection to be one of the Democrats' two Senate candidates in last November's election.

That set up a Perdue-Ossoff rematch, alongside a separate contest between sitting Republican Senator Kelly Loeffler and Raphael Warnock, a prominent African-American pastor and voting rights activist.

Republicans have tried to paint both Ossoff and Warnock as radical leftists, although they have devoted most of their attacks to Warnock – citing past sermons in which he said "nobody can serve God and the military".

In a recent interview with CBS News Ossoff said: "What's happening in Georgia right now is special, and folks wouldn't have believed it 10 years ago – that you've got the young, Jewish son of an immigrant, mentored by Congressman John Lewis, running alongside a black preacher who holds Dr King's pulpit at Ebenezer Church as the standard bearers in these two Senate races to control the Senate running in the most competitive state in the country."

If both Ossoff and Warnock win their contests then Democrats will seize control of the Senate, making it significantly easier for President-elect Joe Biden to enact his policy agenda.

If either Perdue or Loeffler win then Republicans will retain their majority, giving them a virtual veto over Biden's legislative priorities.

On Tuesday (AEDT) Biden and President Donald Trump travelled to Georgia to urge their party's supporters to show up to vote.

At his rally Trump urged his supporters to "flood polling places" in Georgia, because they had been "badly screwed" in November.

"We can't let that happen again," he said. "If you don't go and vote, the socialists, the Marxists will run the country."

Biden said: "Georgia: the whole nation is looking to you to lead us forward.

"The power is literally in your hands. One state can chart the course not just for the next four years but for a generation."