‘America is unreservedly back as the leader of the free world’: Boris Johnson heaps praise on Joe Biden who says Trump ‘strained the transatlantic relationship’

Boris Johnson praised Joe Biden for putting the United States back as ‘leader of the free world’ – and snubbed Donald Trump by saying we are now ‘turning a corner’.

Speaking to the annual Munich Security Conference virtually on Friday, President Biden used his first address before a global audience to declare that ‘America is back, the transatlantic alliance is back,’ after four years of a Trump administration.

Mr Biden spoke of salvaging the Iran nuclear deal, meeting economic and security challenges posed by China and Russia, and repairing the damage caused by the coronavirus pandemic – tasks he said would require close cooperation between the US and its Western allies.

Mr Johnson said: ‘As you’ve seen and heard earlier, America is unreservedly back as the leader of the free world and that is a fantastic thing.

‘The gloom has been overdone. And we’re turning a corner and the countries we call the West are drawing together and combining their formidable strength and expertise once again.’

Speaking to the annual Munich Security Conference virtually, President Biden used his first address before a global audience Friday to declare that ‘America is back, the transatlantic alliance is back,’ after four years of a Donald Trump administration

Without mentioning Donald Trump’s name once in his speech, Mr Biden mixed talk of a reinvigorated democratic alliance with a rebuke of his predecessor’s approach, a message warmly received by Western allies.

‘I know the past few years have strained and tested the transatlantic relationship,’ he said. ‘The United States is determined to reengage with Europe, to consult with you, to earn back our position of trusted leadership.’

The president also participated Friday in a virtual meeting of the Group of Seven industrialized nations, where leaders managed to work Biden’s campaign theme into their closing joint statement, vowing to ‘work together to beat COVID-19 and build back better.’

But while such happy talk conveyed the palpable sense of relief among allies at Biden’s full-throated commitment to mending frayed US-Europe relations, plenty has changed over the past four years in ways creating new challenges. 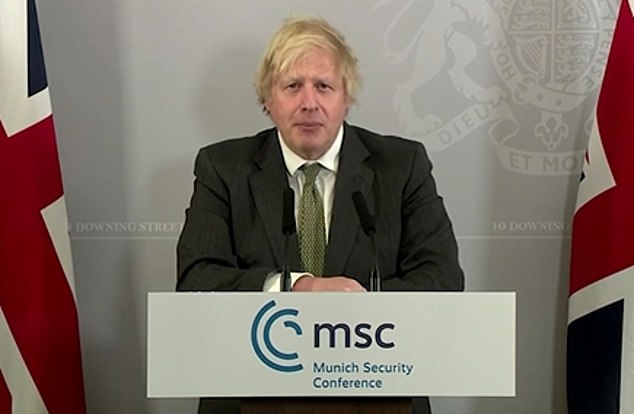 In the lead-up to Friday’s virtual G7 meeting, Boris Johnson pledged to donate the majority of the UK’s surplus vaccines to poorer nations, telling global leaders there is ‘no point’ in vaccinating national populations if efforts are not made to ensure the ‘whole world’ receives jabs 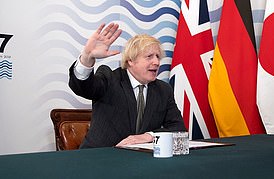 It has been a common problem for millions of office workers around the world over the past year – the dreaded failure to mute their microphone while on a Zoom call.

And yesterday Germany’s Angela Merkel showed that world leaders were not immune from the faux pas as she had to be told to pipe down by Boris Johnson at a meeting of world leaders.

The Prime Minister had to intervene at the start of a virtual G7 meeting that he was hosting from Downing Street this afternoon, which focused on how to solve the coronavirus pandemic.

With US president Joe Biden, French leader Emmanuel Macron and new Italian premier Mario Draghi among those listening to Mr Johnson’s opening remarks about wanting a face-to-face meeting at the G7 summit in Cornwall in June, the chancellor suddenly interrupted him.

‘Can you hear us Angela,’ Johnson quipped over the German, chuckling. ‘I think you need to mute.’

In a lively opening address, the PM also accused Joe Biden of stealing one of his slogans as the two leaders faced each other – on screen at least- for the first time.

Mr Johnson urged the G7 leaders to work together on ‘building back better’ from the pandemic.

He went on to claim it was a slogan that Mr Biden had used, adding: ‘I think he may have nicked it from us but I certainly nicked it from somewhere else – probably some UN disaster relief programme.’

Mr Biden could be seen laughing on the video call on the screen inside the Cabinet Room.

Addressing the leaders, including US President Joe Biden in his first major multilateral meeting, from Downing Street, Mr Johnson encouraged other developed nations to join the effort to increase the global vaccine supply.

He said: ‘Science is finally getting the upper hand on Covid, which is a great, great thing and long overdue.

‘But there is no point in us vaccinating our individual populations – we’ve got to make sure the whole world is vaccinated because this is a global pandemic and it’s no use one country being far ahead of another, we’ve got to move together.

‘So one of the things that I know that colleagues will be wanting to do is to ensure that we distribute vaccines at cost around the world – make sure everybody gets the vaccines that they need so that the whole world can come through this pandemic together.’

The Prime Minister used Friday’s online gathering to argue for an increase in funding for Covax, the multilateral global vaccine supply scheme being led by the World Health Organisation and other international bodies.

The push appeared to be well received, with the leaders issuing a joint statement afterwards agreeing to ‘intensify co-operation’ on responding to the pandemic.

They committed to accelerating global vaccine development and deployment, including improving the sharing of information about the discovery of new variants, and cited 7.5 billion US dollars (£5.3 billion) of support coming from the G7 for the body behind Covax.

Oxfam welcomed the steps taken by the G7 but said they still remain ‘insufficient when compared to the scale of the Covid-19 threat’.

In total, the UK has more than 400 million doses of vaccines on order – enough to vaccinate its population three times over.

But with some vaccines ordered yet to be approved by the UK medicines regulator and the domestic inoculation programme still in full flow, the Government has not yet put a date on when the first Covax donations will be made.

When pressed on when the UK may be in a position to share extra vaccines with poorer countries, Foreign Office minister James Cleverly told the BBC: ‘There are a number of variables, some of which are in our control.

‘We’re not really able to give with certainty either a timescale or the numbers involved.’

During the opening exchanges of the G7 meeting, Mr Biden could be seen laughing on the video call on the screen inside the Cabinet Room after the Prime Minister jovially accused the president’s campaign team of stealing the UK Government’s ‘build back better’ slogan.

With the UK acting as president of the G7 in 2021, Mr Johnson turned his attention to another of his priorities over the next year – climate change.

He told the leaders of the US, Japan, Canada, Germany, France and Italy: ‘I think that this is the right moment for us all to focus on the other great natural challenge about which we’ve been warned time and time and time again.

‘We can’t ignore it, the warnings have been even clearer than they were for Covid, and that is the problem of climate change, and that’s why we’re going to be working very hard to get some great things done at G7 on our plans for the Cop26 summit that we are holding along with our Italian friends in Glasgow in November.

‘It’s great, by the way, that Joe (Biden) has brought the United States back into the Paris climate change accords, a great step forward.’ 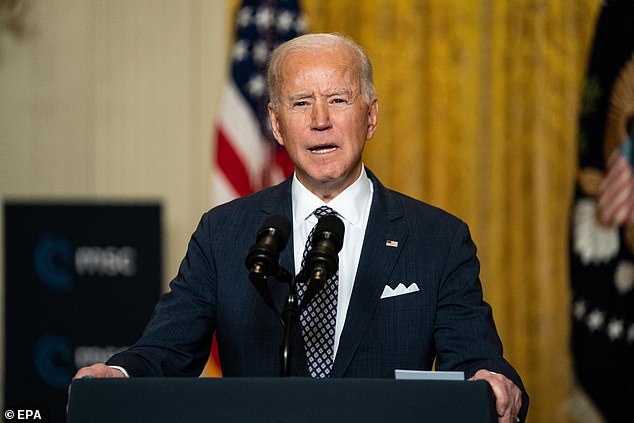 As with many virtual meetings, the start of the call had some hitches.

In video footage, Mr Johnson can be heard telling Ms Merkel she needed to press ‘mute’.

Friday’s online conference was the first meeting of G7 leaders since April 2020 and comes ahead of a summit in Cornwall in June, which Mr Johnson said he hopes can go ahead ‘face-to-face’.

Expressing his support for the G7 format, the Conservative Party leader added: ‘The G7 is the great gathering of like-minded, liberal, free-trading democracies.

‘It is a very, very important forum.’

German Chancellor Angela Merkel noted that some differences between the US and Europe remain ‘complicated.’

Merkel, who had a strained relationship with Trump, didn’t hide her preference for an American foreign policy informed by Biden’s world view.

‘Things are looking a great deal better for multilateralism this year than two years ago, and that has a lot to with Joe Biden having become the president of the United States of America,’ Merkel said. ‘His speech just now, but also his administration’s first announcements, have convinced us that this is not just talk but action.’

He said that the US stands ready to rejoin talks about reentering the 2015 multilateral Iran nuclear deal abandoned by the Trump administration.

The Biden administration announced Thursday its desire to reengage Iran, and it took action at the United Nations aimed at restoring policy to what it was before Trump withdrew from the deal in 2018.

Biden also spoke out about the two-decade war in Afghanistan, where he faces a May 1 deadline to remove the remaining 2,500 US troops under a Trump administration negotiated peace agreement with the Taliban.

He also called for cooperation in addressing economic and national security challenges posed by Russia and China and identified cyberspace, artificial intelligence and biotechnology as areas of growing competition.

‘We must prepare together for long-term strategic competition with China,’ Biden declared.