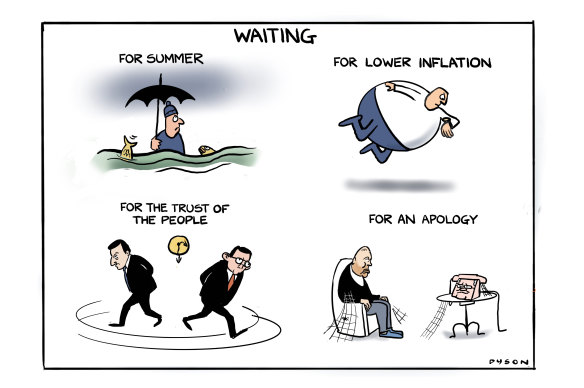 Whether you like Dan Andrews or not, surely it must be acknowledged that his decision to control the spread of COVID-19 by lockdown – before we were vaccinated – saved thousands of lives, and prevented our hospital system from falling over completely. By comparison, tens of thousands more lives were lost elsewhere (e.g., the UK and the US).

One wonders what his critics would be saying now if he had taken a more laissez faire approach, allowing more Victorians to die, develop long COVID, as well as grinding the economy to a halt anyway. It seems some of us have short memories, or unrealistic expectations of perfection, in unprecedented, difficult circumstances.
Dr Marianne Cannon, Princes Hill

The premier must face up to his COVID failures

Your correspondents sought to excuse the Andrews government’s maladministration of hotel quarantine (which allowed the virus to escape into the community) by blaming the Commonwealth’s lack of quarantine facilities, plus that most Victorian deaths occurred in Commonwealth-funded and regulated aged care facilities (Letters, 24/11).

However, other states and territories operated under similar conditions – i.e., using vacant hotels – except that they, unlike Victoria, relied less on untrained security guards by accepting the Commonwealth’s offer of defence force personnel. The comparative ABS data reveals a total of 905 COVID-19 deaths in 2000, some 819 of which occurred occurred in Victoria, but only 86 in the other states and territories. Why should the premier be able to shy away from his accountability?
Thomas Hogg, East Melbourne

Free to lie if you’re aspiring to political office

Having spent 22 years in advertising and experiencing the incredibly strict guidelines that applied to getting a commercial on television, I wonder how it is that political advertising is almost completely unregulated? If you are selling a product or service, you cannot lie. If you are selling yourself as a potential premier, you can.
Kay Southwell, Balwyn North

Every appearance so carefully stage-managed

It seems that Daniel Andrews was too scared to vote in his own electorate as he knew he would be abused by his constituents – not a good look on television. It is amazing that so many of his appearances during the campaign have been tightly controlled, stage-managed events rather than him mixing freely with the public. Why has this not been called out by the media?
Tim Gillespie, Camberwell

Mathew Guy wants to privatise our sewerage works and Daniel Andrews wants to restart the SEC to produce solar electricity that will compete with coal and gas-fired generators. I think that says it all.
Kevin Fahey, Red Hill

Seeking representatives who will protect forests

The government promised to create national parks in central-west Victoria more than a year ago. But legislation has not been enacted and logging is going on in Wombat State Forest and Mount Cole State Forest. According to the Victorian National Parks Association, 50,000 hectares of bushland, home to many threatened plants and animals are at risk because of this unmet promise. I hope voters support parliamentary representatives who will not sit by as VicForests pulps the native forest that should be protected in promised national parks.
Angela Munro, Carlton North

Importance of MPs having a moral compass

Your correspondent (Letters, 25/11) is alarmed at the thought of Liberal candidate for Hastings, Briony Hutton, being guided by her Christian faith in considering legislation. Do we want our legislators to have no moral compass? Be it Christian values, Buddhist values, or any religious or non-religious values, as long as they are ethical and act accordingly we can/should ask for no more.
Vicki Jordan, Lower Plenty

Abuse from all sides

Your correspondent (Letters, 24/11) says “rightly or wrongly … frustrations (with lockdown rules) will be translated into the political process”. Well, as a volunteer making phone calls on behalf of a Labor incumbent, I can say that it is wrong.

I have been on the receiving end of some shocking abuse. Whether it is calling Dan Andrews every name you can think of, hoping that I receive lots and lots of nasty calls, yelling at me that they hope we all get sick and lose everything, and on and on. But I always let these people vent and then finish with, “Thank you for your time. Have a nice afternoon”. As Michelle Obama so famously said, when they go low, you go high.
Samantha Keir, East Brighton

The long trek to vote

Nice work from whoever allowed COVID-positive voters the option of travelling to the only drive-through booth – in Melton, a 236-kilometre return trip from the Mornington Peninsula. Good luck to those who are travelling to Melton from Mallacoota.

No phone votes are allowed and yet the Victorian Electoral Commission’s website states: “Voting is your right”. Followed by a warning that you might get a fine by not voting. Everyone loses by this decision, including democracy.
Felix Patton, Mount Martha

On election day, it feels as though the leaders we should have had are missing. Labor’s James Merlino and the Liberals’ John Pesutto would have given us real alternatives to arrogance and unpreparedness.
Sally Holdsworth, Malvern East

Making up the shortfall

The state government receives about $2billion per annum in revenue from gambling. To win government, both parties need to convince Victorians that they will responsibly manage the budget and meet expectations in delivery of service. If strict controls are placed on gambling, how will the state make up for the reduction in revenue? Most voters do not want to pay more taxes, so what choices do the major parties have?
Michael D’Aloia, Coburg

Why the headlong rush?

As a retired senior transport and town planner, I am most concerned over the rush to commence the Suburban Rail Loop without adequate community consultation and a robust business plan. Already there is controversy about the design and location of interchange stations such as Glen Waverley where passengers will have long walks between circle line and existing radial station platforms.

Detailed assessments of the benefits and costs of the project, including environmental and social issues, are sorely lacking. Surely these matters should be attended to rather than rushing headlong into construction immediately before an election. Or is the rush predicated on the fact that the first phase – from Cheltenham to Box Hill – runs through the highly contested sand-belt electorates including the premier’s seat of Mulgrave?
Bob Evans, Glen Iris

So Qantas expects to book between $1.35 billion and $1.45billion in underlying profit before tax in the first half of its financial year, up $150 million from a previous guidance in October (Business, 24/11). Is there any chance of it returning the taxpayers’ money it received during COVID-19?
Mary Wise, Ringwood

I was dismayed to read the email from former minister Stuart Robert, in which he said: “An audit report is neither here nor there. It’s government strategy that matters” (The Age, /11).

As a former Commonwealth (and financial services) ombudsman, having held office over about 20 years, I argue that this reference, apparently to reports made by statutory officers, discloses an attitude which can lead to decisions on the part of MPs, ministers and other public officials which benefit sectional, rather than the public, interest. Let us remember that a government strategy might well be illegal on detailed examination.

Offices such as the Auditor-General and government and private sector ombudsmen provide leadership and encourage behaviours leading to right, proper and fair decisions.

During my time as an ombudsman, some of the recommendations I made incurred the ire of those who had to do something they had neglected to do appropriately in the past. However, I never thought that what I required was “neither here nor there”. Rather, I felt that I had got a large institution or government department to “do the right thing”. I am sure auditors-general feel the same way.
Colin Neave, Brighton

So the Governor-General, David Hurley, thought nothing of requiring guests to sing even though some found it “awkward or embarrassing”. Apparently he also thought nothing about secretly swearing in former prime minister Scott Morrison to many other ministries – “Morrison damaged friendship: Frydenberg” (The Age, 25/11). Strange behaviour indeed from someone who is our head of state and supposed to be a comforting figurehead.
Peta Colebatch, Hawthorn

Your correspondent (Letters, 25/11) despairs at the lack of security systems in businesses and charities, saying it makes him “want to go back to writing cheques” to avoid the repercussions of hacking.

I have never been a customer of Optus or Medibank and have never donated to the Smith Family. I also donate by cheques. Yet last month two charities which I donate to printed my phone number on the begging letters they send me, despite the fact that I have never given it to them. Clearly, some charities are joining in the business of hacking private information.
Robyn Westwood, Heidelberg Heights

I laughed out loud when reading about banks’ and super funds’ “ferocious response” to proposed fines for financial services executives and their claim that they “should have been consulted on the changes” (The Age, 25/11).

Has the financial services sector forgotten the royal commission’s damning findings? Fees for no service and fees disproportionate to service provided? Charges to dead people? Facilitating money laundering? Does this ring a bell? Maybe all thieves and extortionists should also be asked their opinions before penalties are allocated.
Geoffrey Conaghan, St Kilda

Re the suggestion of one, rather than two, pilots in passenger planes. In the film, Flying High, when both pilots became ill, the air hostess innocently asks over the speaker system, “Is there anyone on board who can fly a plane?” Appropriate turmoil followed.
Winston Anderson, Mornington

We are bombarded by solar energy providers to install their systems which are subject to a substantial government subsidy. Unfortunately these are not available to homes for which the only solution is wind power due to excessive shade. All experts who assessed our property have come to the same conclusion.

However our property, being located on top of a ridge, is ideally suited for harvesting wind energy. Costs are similar or less than solar installations yet there is no assistance available. As the government subsidy is designed to reduce reliance on coal and gas-generated power, this seems shortsighted and indeed discriminatory.
Gerrit Linde, Mount Dandenong

More Robert Menzies: After a difficult bout of talks with Queensland government representatives, he sighed and said to a colleague, “Sometimes I think Queensland is not a state but a state of mind”.
Donald Hirst, Prahran East

Does this mean we’ll have to spend a dollar instead of a penny?
Mike Pantzopoulos, Ashburton

Will the s..t hit the fan if a Liberal government privatises sewerage plants?
Rosenna Hossack, Edithvale

Guy plans to find $5.1 billion by “eliminating waste”. That will reduce the price he gets for the sewage system.
Ken Farmer, Port Melbourne

With all the hype and confusion from the major parties, remember that saying: Be careful what you wish for.
John Paine, Kew East

″⁣Andrews departs from tradition″⁣ (25/11). Does this mean he’s not a conservative?
Ralph Tabor, Pakenham

Frydenberg is entitled to feel betrayed, but not surprised, by Morrison, who has a history of dishonesty.
John Bye, Elwood

Stuart Robert (24/11) certainly punches above his weight when it comes to making the headlines.
Ian Hetherington, Moama

Wonderful news re the release of Sean Turnell. Julian Assange must be next.
Liz Gray, Brighton

The hardest-working team at the World Cup is in the pre-game barber shop.
Angus McLeod, Cremorne

A Current Affair won’t be the same without Tracy Grimshaw. I wish her well in her future endeavours.
Doug Springall, Yarragon

Michael Bachelard sends an exclusive newsletter to subscribers each week. Sign up to receive his Note from the Editor.’