Religious groups, academics and the national students’ union have called on organisers of an Australia-India youth event to cancel their invitation to a controversial right-wing nationalist Indian politician.

Tejasvi Surya, a member of ruling Bharatiya Janata Party (BJP) in India, who apologised last year after calling for those who had left the Hindu faith to be reconverted, will be in Australia next week for the Australia India Youth Dialogue conference. 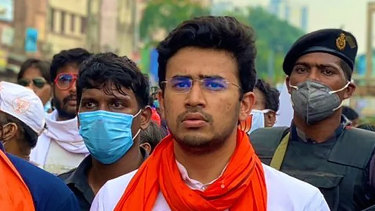 The event will take place in Sydney and Melbourne where young delegates from India and Australia engage in talks every year to strengthen relations between the two countries.

The Australian Alliance Against Hate, a coalition of faith groups and academics, wrote to several partners of the event, including Monash University and the University of Sydney, asking that they withdraw their support for the conference in response to the “deeply divisive and exclusionary ideology” of Surya.

They pointed to his membership of the Rashtriya Swayamsevak Sangh, a Hindu nationalist movement, and said Surya had a “history of misogyny [and] promoting religious intolerance”.

A petition started by Indians in Australia calling for Surya’s visa to be revoked has gained more than 1000 signatures.

But a counter petition organised by Australian Indian supporters of Surya’s political party, was scathing of the “woke left narrative” and said the Indian diaspora would “not allow the cancer of cancel culture to be induced in India Australia relations”.

That petition, which has more than 400 signatures, says Surya is a youth icon with over 1 million followers, who would be instrumental in promoting the relationship in the field of education.

The Sunday Age attempted to reach Surya for comment.

The controversy comes amid rising tensions stoked by hate speech in India, with right-wing groups increasingly promoting a Hindu-first vision of India that relegates minorities, such as Muslims, to second-class citizens. Political leaders have been accused of tacitly endorsing the hate speech by remaining silent.

The youth conference has been running since 2012.

The National Tertiary Education Union also urged the University of Sydney to withdraw its support for the event.

A spokeswoman for the University of Sydney said it had recently become aware of some community concerns around the choice of Surya at this year’s event. She said the university had raised it with the organisers.

The spokeswoman said all delegates were required to promote a respectful, safe and tolerant environment for discussions.

“We also accept that [the dialogue] does not endorse particular political views, but rather seeks to provide a platform for the diverse and complex range of views that exist in both India and Australia. As an elected member of Indian parliament, we consider the participation of this panellist reflects the aim based on our current understanding.”

The spokesperson has said the university will continue support the event as they have for several years and are “deeply committed” to the protection of free speech and academic freedom.

Monash University, another partner of the event, said it had no influence in the selection of delegates.

Waseem Razvi, a youth councillor from the Islamic Research And Educational Academy in Melbourne, said he had received dozens of calls from concerned members of the Indian community after they heard Surya would be coming to Australia.

“I got calls from Indian Hindus, Christians and Sikhs who were shocked Surya would be invited to the conference,” he said.

Razvi says he is concerned Surya’s attendance would cause division and “spread hate like he has back home”.

“Australia is a multicultural society, there’s a lot of harmony. I don’t think he should be here,” he said.