An award-winning architect has unveiled his grand plans for the fire-damaged Notre Dame cathedral spire which would make it solar powered and even include a garden to grow 21 tonnes of fruit and vegetables each year.

Vincent Callebaut has submitted his innovative designs for the rebuild of the famous cathedral, which would transform it into a modern, eco-friendly building.

The architect’s stunning plans would even see the cathedral in Paris become self-sufficient, producing more energy than it consumes.

Mr Callebaut said this would be done through a special crystal glass on his incredible curved spire, which would absorb light and use it to power the building.

He added the leftover energy could then be re-distributed to nearby buildings for free, while a weekly farmer’s market could be held outside the cathedral for the fruit and vegetables grown there. 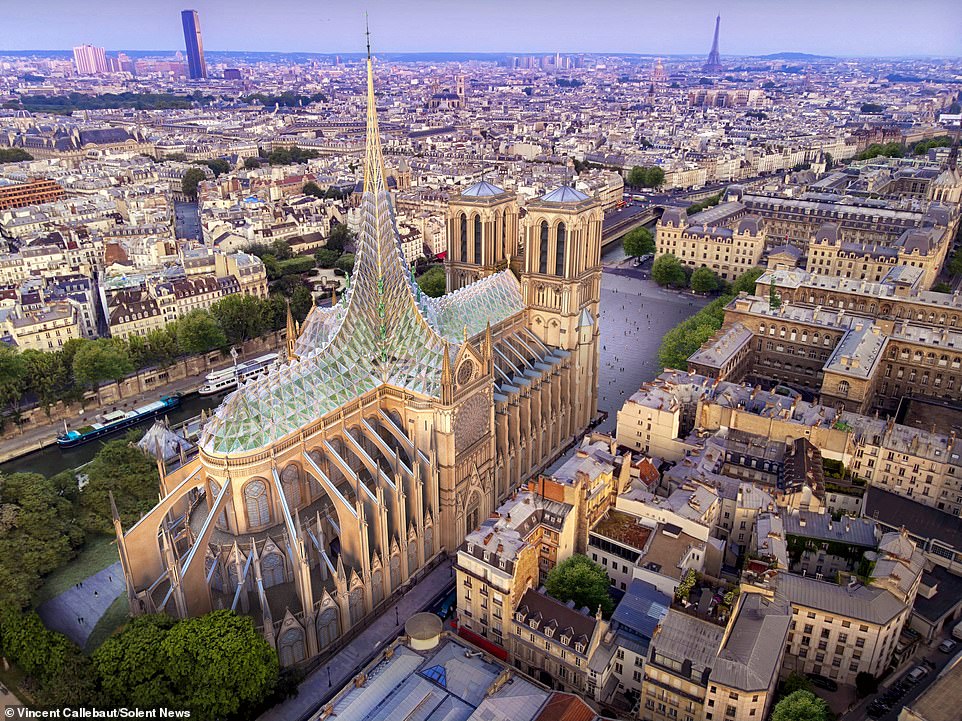 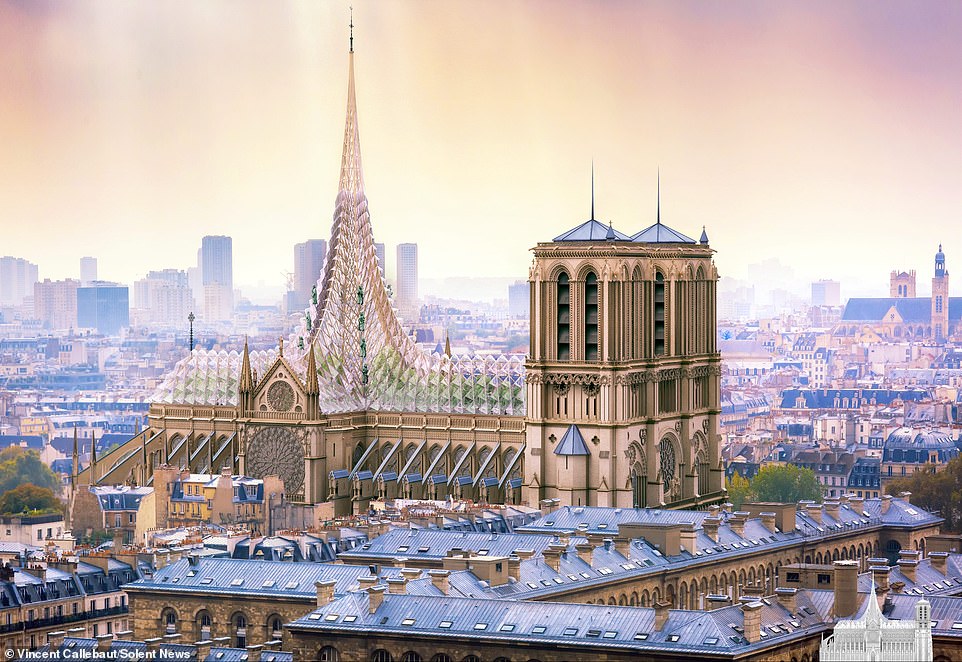 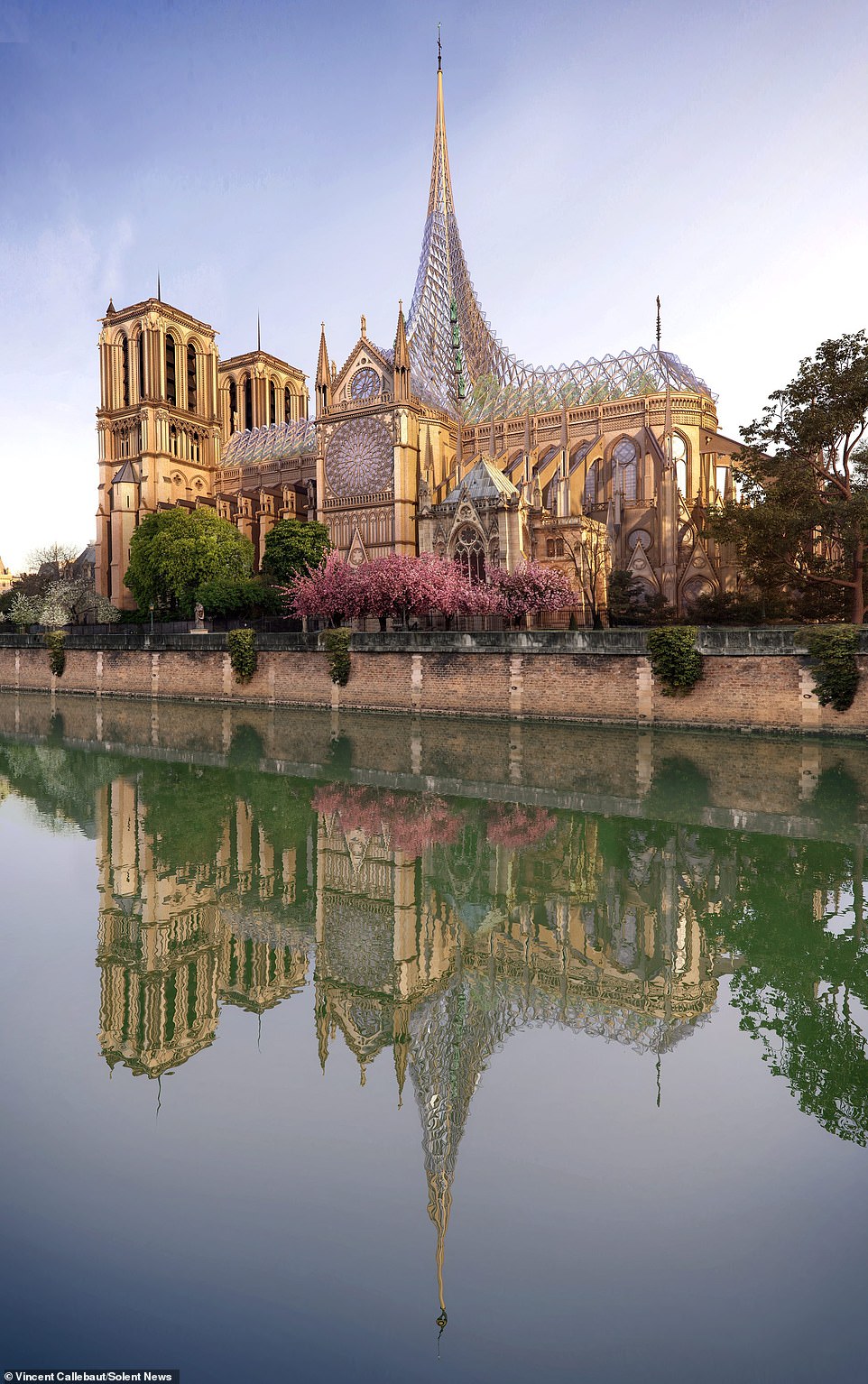 The leftover energy form the solar panels would then be re-distributed to nearby buildings for free, while a weekly farmer’s market could be held outside the cathedral for the fruit and vegetables grown there

The designs have now been submitted to the French Government, who announced an international competition to re-design the spire of the Cathedral.

At one point during the nine-hour inferno, the flames threatened the entire edifice, until it was brought under control.

The blaze erupted in the UNESCO world heritage landmark in the French capital last month, sending its spire and roof crashing to the ground as flames and clouds of smoke billowed into the sky.

Prime minister Edouard Philippe made the announcement of the new proposals following a special Cabinet meeting held by the country’s President Emmanuel Macron to discuss the reconstruction of the famous building.

Describing his futuristic design, Mr Callebaut said: ‘As we start thinking about Notre Dame’s reconstruction, questions arise as to how we can architecturally summarise the human intelligence of our era and depict the prospects of Catholicism. 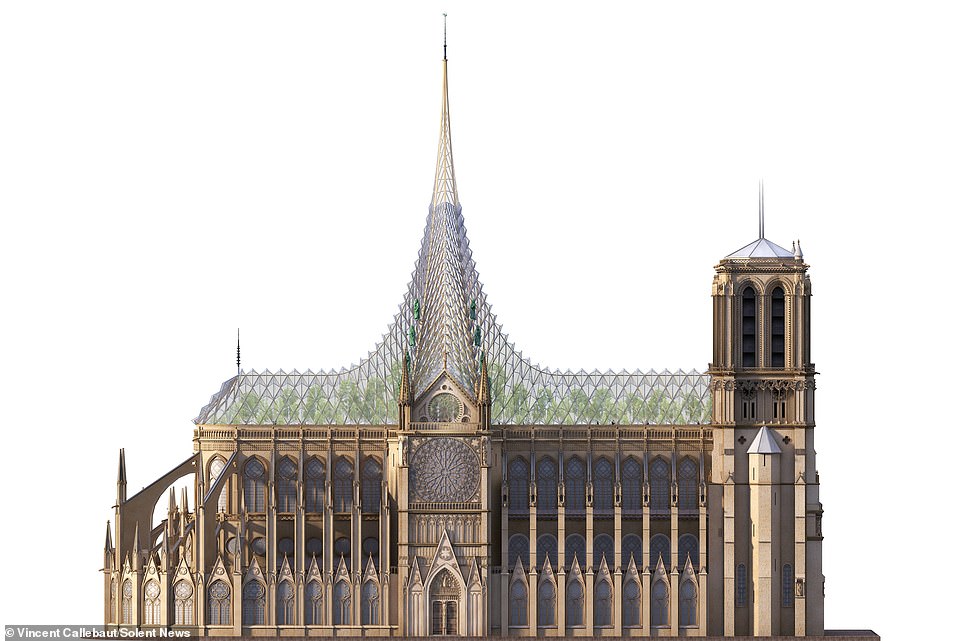 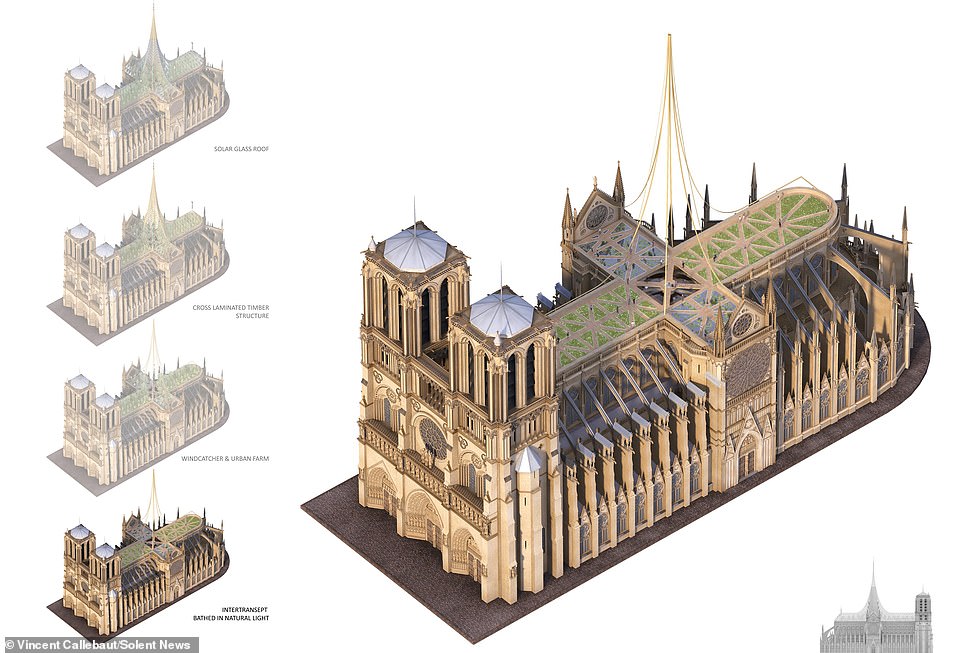 The designs (pictured) have now been submitted to the French Government, who announced an international competition to re-design the spire of the Cathedral

‘How can we write the contemporary history of our country, but also that of science, art and spirituality together?

‘It is not enough to reproduce the past as it used to be; we must project ourselves towards a desirable future.

‘Thus, we seek to present a transcendent project, a symbol of a resilient and ecological future that offers the city of Paris a set of solutions.’

Mr Callebaut’s incredible plans include a ‘thermal buffer space’ in the rooftop spire, which would store hot air in the winter to insulate the building and has vents to allow fresh air in during the summer months.

He has even planned for the iconic rooster statue, which stood proud atop the spire before being dented during the collapse, to be returned to its former position once again. 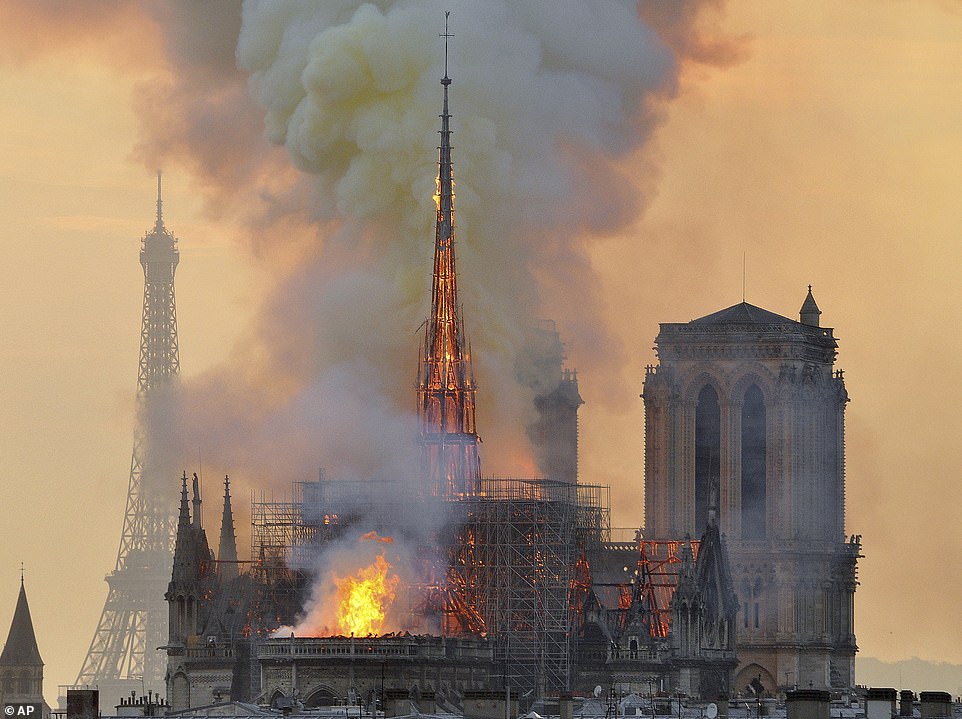 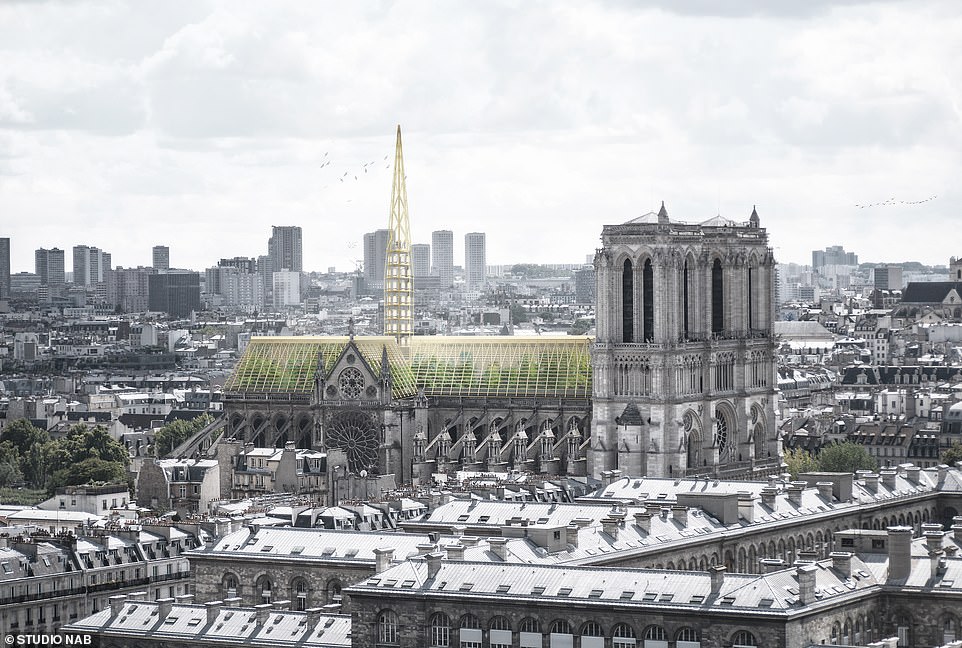 French firm Studio NAB said that it wanted to look at the redesign of Notre Dame as a question of environmental, educational and social integration

Mr Callebaut, of Paris, said: ‘The idea is use this new architectural ‘graft’ to turn Notre Dame into a positive energy building, designed to produce more energy than it consumes.

‘The rooster located and found in the rubble the day after the disaster will crown the spire again; in this position, it should remain the ‘spiritual lightning rod’ and protector of the faithful.’

Other proposals include architects Studio NAB who come up with the concept of turning the damaged roof into a giant greenhouse.

It would also come with an apiary that takes the place of the spire to house the 180,000 or so bees that survived the devastating blaze.