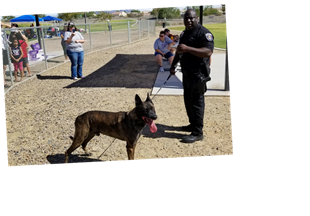 An Arizona police officer has been docked 20 hours of pay over the hot car death of his K-9 partner last June.

Maricopa Police Officer Craig Curry left his K-9 named Ike inside his patrol car and left the engine running while he went into police headquarters for a meeting on June 26, 2020, according to a report by the state Department of Public Safety.

Curry went back to his vehicle an hour and a half later and noticed it had turned off. He found Ike in the backseat panting heavily, the report said.

Temperatures reached as high as 108 degrees that day. Ike was euthanized the next day.

Curry failed to check up on the pooch every 30 minutes, which cops are required to do, per department policy.

The officer had a device that would detect and alert him if the car became too hot for the K9, but he left it in his car when he went to his meeting, an investigation revealed.

Curry said he wasn’t carrying the device because his new body camera was taking up too much space on his vest.

His department handed down the 20-hour unpaid suspension.