As Colin Powell dies aged 84, TOM LEONARD looks back at his career

The war hero wounded by weapons of mass destruction: Icon of Desert Storm and tipped for the White House, before a fateful error that triggered an invasion. As Colin Powell dies aged 84, TOM LEONARD looks back at his career

To the foreign policy hawks who saw war as an easy move in America’s global chess game, Colin Powell had a warning.

‘You break it, you own it,’ the four-star general famously told President George W Bush, invoking what came to be known as his ‘Pottery Barn Rule’ after the US home-furnishing store that insisted shoppers paid for breakages.

Colin Powell spent four decades in public life during which he became America’s top black soldier and later Secretary of State. He was mourned around the world after he died yesterday from Covid-19 complications.

Despite being fully vaccinated, the 84-year-old’s immune system had been weakened by a battle against blood cancer. He was also suffering from Parkinson’s disease.

Powell was for years a bulwark of reassurance that, whatever lunacy was gripping the White House, there was at least one grown-up in the room.

There was one major exception to this rule – one he regretted for the rest of his life. This was his ill-judged and badly informed 2003 speech to the United Nations in which he claimed there was irrefutable intelligence that Saddam Hussein had weapons of mass destruction – paving the way for the US and UK to invade Iraq. 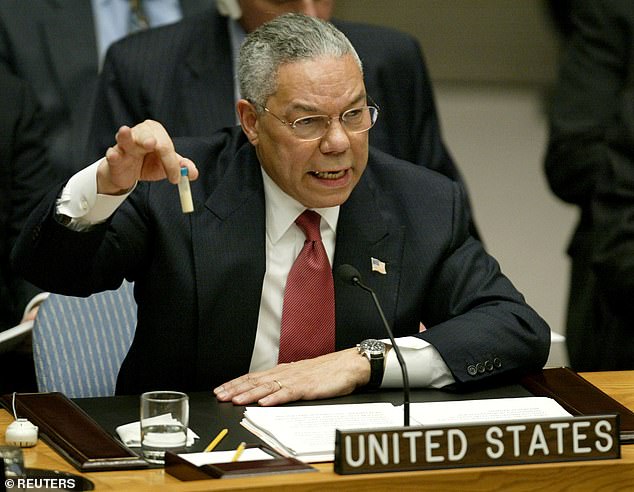 U.S. Secretary of State Colin Powell holds up a vial that he described as one that could contain anthrax, during his presentation on [Iraq] to the U.N. Security Council, in New York February 5, 2003. Powell died on Monday from Covid complications

Although a Republican who served in the administrations of Ronald Reagan and both George Bushes, Powell was a moderate who shifted allegiances over the years and who called himself a ‘problem solver’ rather than an ideologue.

A highly political general, he was appalled by Donald Trump and infuriated many in his own party by endorsing Barack Obama.

Unsurprisingly, politicians on both sides of America’s sharp divide came out to eulogise him.

George W Bush and former First Lady Laura Bush said they were ‘deeply saddened’, adding: ‘He was a great public servant. Many presidents relied on General Powell’s counsel and experience.’

Joe Biden said Powell ‘embodied the highest ideals of both warrior and diplomat’, and was a ‘patriot of unmatched honour and dignity’.

Tony Blair said Powell was a ‘towering figure’ who ‘still had so much to give’.

Rudy Giuliani, former New York City mayor and personal lawyer to Mr Trump, tweeted: ‘Colin Powell was a great American and a good friend. I was one of a small, but determined group that urged him to run for president in 1996. What if?’ Giuliani wasn’t the only one who asked that question.

Born in Harlem, New York, Powell’s parents were Jamaican immigrants who arrived in the US on a ‘banana boat’ – a fruit company steamer. After hardly shining at school, he joined the Reserve Officers’ Training Corps while studying for a geology degree.

It was the start of a 35-year military career – commissioned as a second lieutenant in an army that had only recently become desegregated. Powell’s first posting was to Georgia where he was refused entry to restaurants and bars because of his colour.

He was later posted to West Germany where he met Elvis Presley while the singer was doing national service. He recalled: ‘He was thought of well enough by his commanders that he was promoted from private to sergeant… I see him as Elvis the soldier who, by the way, happened to be a celebrity.’

Returning to the US, Powell met Alma Johnson on a blind date and they married in 1962 (eventually having three children) before he was sent to Vietnam.

Posted to a jungle region on the Laos border, Powell stepped on a booby trap which poisoned his foot, removing him from front-line service. He was later sent back and was decorated for staggering back into the wreckage of a helicopter to rescue fellow soldiers, despite having a broken ankle.

The doomed Vietnam conflict and its lack of public support shaped his view, later known as the Powell Doctrine, that ‘war should be the politics of last resort’. Meanwhile, his ascent through the ranks was so swift that, at just 42, he became the US Army’s youngest general. During the Reagan presidency, he was appointed national security adviser in 1987.

As he helped his boss end the Cold War, Powell won respect on both sides. Soviet president Mikhail Gorbachev sent him an engraved shotgun as a present.

Powell kept a list of 13 rules on his desk which he said saved his life. They included: ‘It ain’t as bad as you think. It will look better in the morning’; ‘Get mad, then get over it’ and ‘Be careful what you choose. You may get it.’

In 1989, President George H W Bush named him chairman of the Joint Chiefs of Staff, the country’s top military post, after Powell – then only 53 – had even been mooted as his White House running mate. 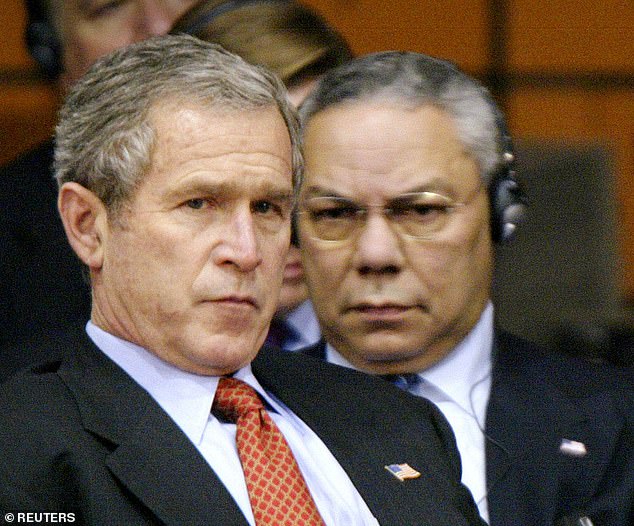 U.S. President George W. Bush and Secretary of State Colin Powell listen to proceedings during the afternoon session of the NATO summit in Prague November 21, 2002

He found himself plunged into two conflicts – the invasion of Panama and the first Gulf War.

Leading a coalition of 35 countries and 500,000 troops to oust Saddam Hussein from Kuwait, Powell enacted his philosophy of using overwhelming force to end a conflict quickly. Following a crushing bombing campaign, the Iraqis crumbled after a 100-day ground war and the loss of only 383 US soldiers during Desert Storm.

He became a national hero and was given an honorary knighthood by the Queen. His currency was so high, both the Republicans and Democrats sounded him out as a possible vice presidential candidate in the 1992 election.

After Bill Clinton was elected, Powell – who opposed Clinton’s support for allowing gays into the military – retired from the army. Clinton gave him a 1966 Volvo as a leaving present, knowing that restoring old Volvos was Powell’s favourite hobby. In the 1996 election, polls suggested Powell would beat Clinton if he ran on the Republican ticket but he chose not to, later admitting he had given up on the chance to become the ‘black Eisenhower’ with a ‘great deal of personal anguish’.

After endorsing George W Bush in the 2000 election, Powell returned to government as Secretary of State. But the September 11 attacks pitched him into a bitter struggle with vice president Dick Cheney and defence secretary Donald Rumsfeld, who favoured invading Iraq to get rid of Saddam.

It was argued that Powell, as the most respected member of the cabinet, could have spoken out more forcefully against the war. But he cited his sense of duty and obedience to the President’s authority.

In February 2003, he was given the job of persuading the UN Security Council of the case for war. Forgetting his eighth rule – ‘check small things’ – he claimed ‘there can be no doubt that Saddam Hussein has biological weapons’.

When no such weapons were found, the damage to his credibility was irreversible, and he left government the following year.

He kept a low profile until the 2008 presidential election when he endorsed Mr Obama.

Just as he alienated black leaders with his conservative views, Powell infuriated the Republican Right when, in leaked emails, he declared: ‘Trump is a national disgrace and an international pariah.’

The man who could have been America’s first black president instead chose a path that occasionally allowed him a soldier’s bluntness over the politician’s guile.