Wednesday night’s super blood moon might be Australia’s best astronomical event of the year – and it’s happening in prime time.

On Wednesday afternoon, a huge full moon will slowly rise into the sky before turning a light copper-red as the Earth’s shadow crosses its face.

Super blood moons represent a rare coming together of supermoon and lunar eclipse – and it could be several years before we see one so clearly again. 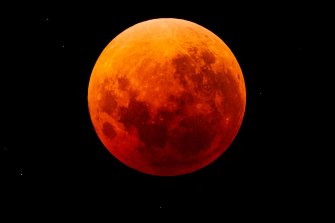 The eerie glow of the super blue blood moon as seen from Kew, in this pic from Melbourne Express reader Joseph. Credit:Joseph Hsu

Most good stargazing happens in the early hours, but the super blood moon’s peak viewing time will be a little after 9pm (Eastern Standard Time), and it will be visible across the city, no telescope needed.

“Families can get out there and have a look, young kids can be amazed. For many of them, it will be their first significant celestial phenomenon,” he said.

“It could arguably be the best astronomical phenomenon of the year.” 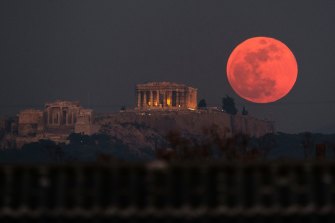 A super blood moon rises behind the 2500-year-old Parthenon temple on the Acropolis of Athens, Greece, on Wednesday, January 31, 2018.Credit:AP Photo/Petros Giannakouris

The supermoon will start to rise from the eastern horizon at 5.03pm.

At 7.44pm, the Earth’s shadow will start to creep across the moon’s surface.

By 9.11pm, the entire surface should be in shadow, turning the moon from a ghostly white to a light red, which should last about 15 minutes.

Sydney Observatory curator Andrew Jacob said it would be “totally safe to look at”.

“Look towards the eastern sky, any time for around 8pm onwards. If you’re short for time, look between 9 and 9.30pm,” he said.

“As we progress through the night, the moon will show a fuzzy bite taken out. And as it moves into the shadow it will gain that coppery red colour by 9.15pm, and it will hold onto that until about 9.30pm.”

Supermoons happen because the moon’s orbit is not really circular, but is more like the grass on the MCG: an oval. 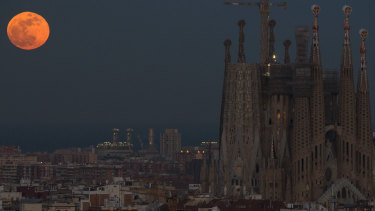 At either end of the moon’s orbit, it is a little further from Earth, while mid-orbit it is closer. A supermoon occurs when the moon reaches “perigee” – the point in its orbit when it is closest to Earth, and looms largest in the sky.

When perigee coincides with a full moon, we have a supermoon.

The moon appears largest just as it rises above the horizon – a trick of the eye known as the “moon illusion”. The moon is no larger, but because our eye has something to compare it to, like trees or buildings on the horizon, our brain tells us it is much larger than it is.

A blood moon occurs during a total lunar eclipse, when the Earth comes between the sun and the moon.

It does not cast the moon into pitch black darkness; rather, light from the sun trickles past the edges of the Earth, filtering through our atmosphere and turning the moon red – hence the blood moon.

Sunlight is white because it is made up of all the colours of the rainbow. When it hits our atmosphere, some of that light hits molecules in the atmosphere and scatters across the sky. Blue light is much more likely to scatter than other colours – which explains why the sky is blue.

This also explains why the moon turns red during a lunar eclipse. The only sunlight reaching the surface has already passed through Earth’s atmosphere, where much of the blue is stripped away. Red light tends to scatter the least in the atmosphere, meaning more of it reaches the moon – turning it red.

Mr Vlahos’ advice for the best viewing? Pack a romantic picnic basket and head to a beach on the western side of Port Phillip Bay from where the moon will appear to rise above the water.

“If the families can get out there, the young kids will probably remember it for the rest of their lives – I certainly remember my first one.”

Watch the Astronomical Society of Victoria’s livestream of the super blood moon on Wednesday night.

Science and health explained and analysed with a rigorous focus on the evidence. Examine is a free weekly newsletter by science reporter Liam Mannix. Sign up to The Age’s here and the Sydney Morning Herald’s here.