Americans are turning their back on church: 81% say they believe in God – down 6 percentage points from 2017 – and younger, liberal people are less likely to be believers, according to new survey

Belief in God has reached a new low in the U.S., with only 81 percent saying they believe, according to a new Gallup poll.

The survey, released on Friday, asked 1,007 American adults in May if they believe in God, with 81 percent saying they do, a 6 percent decrease from the 87 percent who said yes in 2017, the last time the poll was conducted.

About 17 percent told Gallup they did not believe, while the remaining 2 percent said they were unsure.

Believe in God has been dropping since 1967, where faith was at an all-time high at 98 percent for more than a decade, with the previous low recorded in 2014 at 86 percent.

‘Fewer Americans today than five years ago believe in God, and the percentage is down even more from the 1950s and 1960s when almost all Americans did,’ Gallup said in a statement. Still’, the vast majority of Americans believe in God, whether that means they believe a higher power hears prayers and can intervene or not.’ 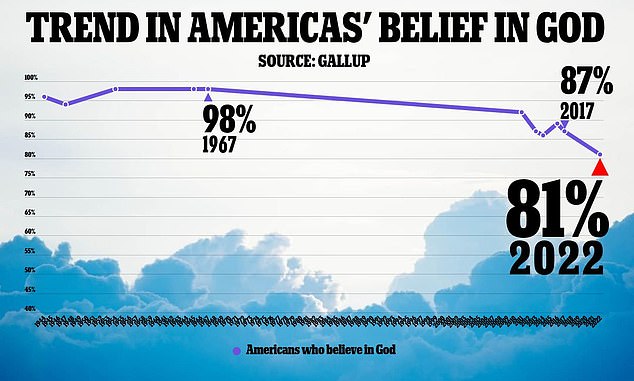 A Gallup poll of 1,007 American adults found that only 81 percent say they believe in God, a 6 percent drop from 2017, the last time the poll was conducted 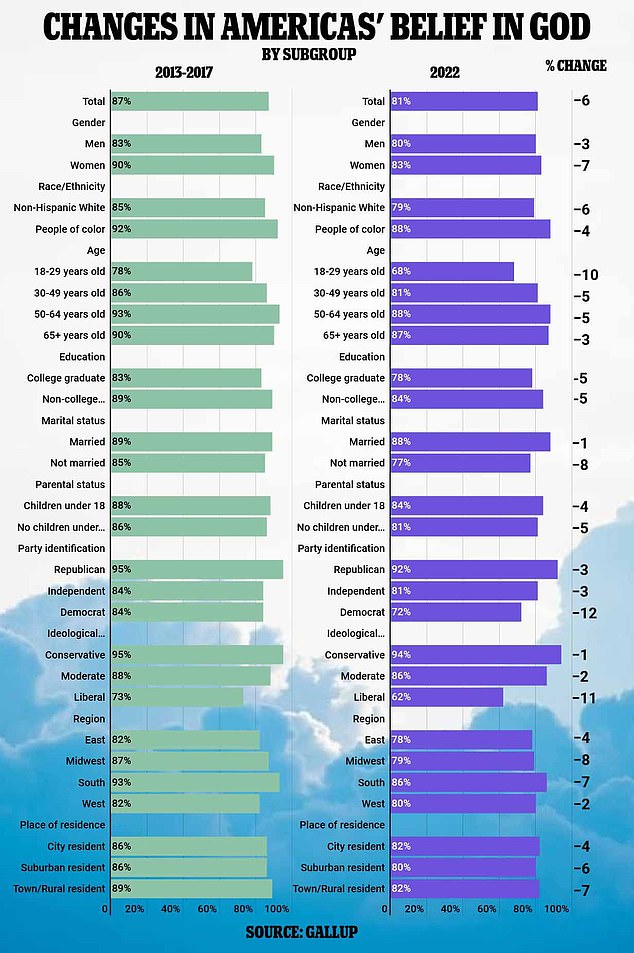 Among the biggest drops came from younger liberals, as well as those living in the Midwest

Among the key findings in the poll was that young adults and those on the political left accounted for the growing decrease in belief.

The latest poll showed only 68 percent of those between 18 to 29 years old said they believe in God, down 10 percent from 2017.

While the younger liberals represented the greatest change, a belief in God is down among every demographic.

The Gallup poll found that the belief in God dropped by 5 percentage points among those between 30 to 49, to 81 percent, as well as those between 50 to 64, to 88 percent.

About 92 percent of those identified as Republicans said the still believe in God, down three percent from 2017.

The largest shift away from a belief in God was also recorded in the Midwest at 79 percent, an 8 percent drop, and in the south at 86 percent, a 7 percent decrease.

In a follow-up question to the poll, Gallup asked the 1,007 adults about their opinion on the effectiveness of prayer. 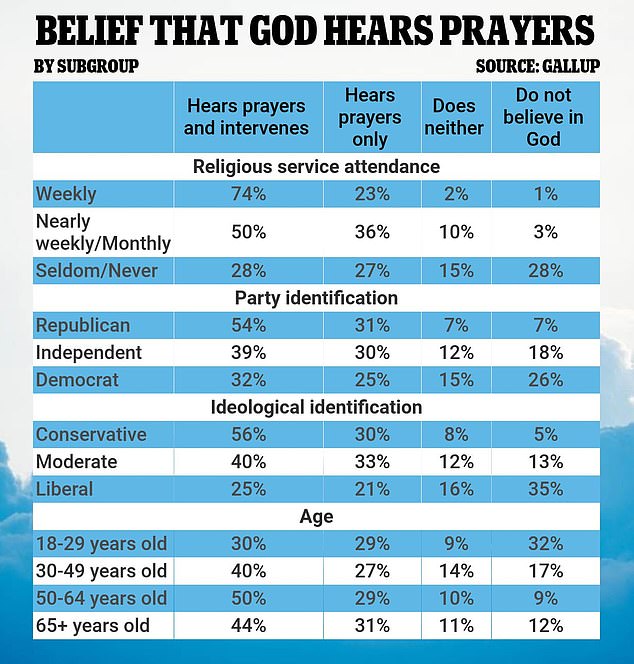 About 11 percent said God does neither, while 17 percent reinstated that they did not believe in God.

Less than three-fourths of those who attend religious services weekly actually believe God hears prayers and intervenes, only 25 percent of liberals agree.

Gallup added that traditional religious structure was on the decline, with American’s appearing to opt for more ‘basic faith in God.’