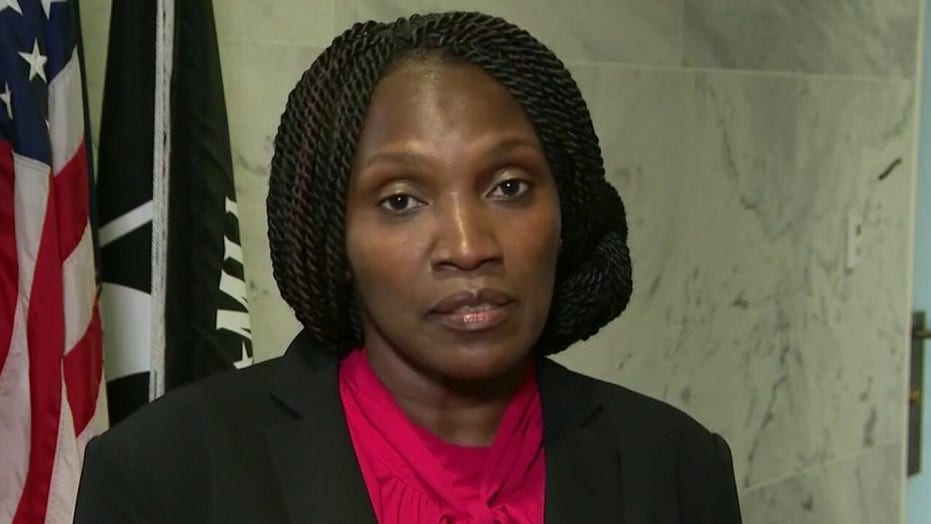 Prosecutors and defense attorneys on Friday presented dueling portraits of Ahmaud Arbery, who was either an innocent Black runner fatally shot by three White strangers or “a scary mystery” who had been seen prowling around a Georgia neighborhood.

In her opening statement, prosecutor Linda Dunikoski said the short cellphone video that stirred national outrage over Arbery’s slaying offered only a glimpse of the attack on the 25-year-old, who gave his pursuers no reason to suspect him of any wrongdoing.

“They assumed that he must have committed some crime that day,” Dunikoski said. “He tried to run around their truck and get way from these strangers, total strangers, who had already told him that they would kill him. And then they killed him.” 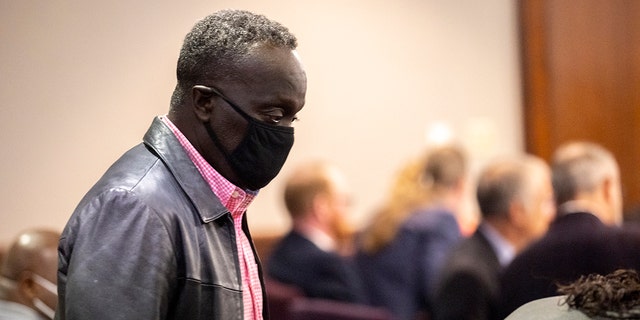 Marcus Arbery, center, father of Ahmaud Arbery, takes his seat during a pretrial motion hearing in the trial of Greg and Travis McMichael and their neighbor, William "Roddie" Bryan, at the Glynn County Courthouse, Thursday, Nov. 4, 2021, in Brunswick, Ga. The three are charged with the February 2020 slaying of 25-year-old Ahmaud Arbery.
(AP Photo/Stephen B. Morton, Pool)

A defense attorney for Travis McMichael, the man who shot Arbery three times, put the shooting in a much different light. Attorney Robert Rubin described Arbery to the jury as “an intruder” who had four times been recorded on video “plundering around” a neighboring house under construction.

“It is a horrible, horrible video, and it’s tragic that Ahmaud Arbery lost his life,” Rubin said. “But at that point, Travis McMichael is acting in self-defense. He did not want to encounter Ahmaud Arbery physically. He was only trying to stop him for the police.”

Arbery’s killing on Feb . 23, 2020, was largely ignored until the video leaked and deepened a national reckoning over racial injustice.

On that Sunday afternoon, the McMichaels armed themselves and pursued Arbery in a pickup truck as he ran through their neighborhood just outside the port city of Brunswick. A neighbor, William “Roddie” Bryan, joined the chase and recorded graphic video of Travis McMichael shooting Arbery with a shotgun. 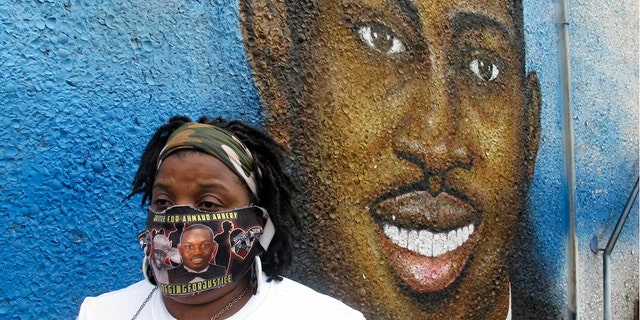 Thea Brooks stands in front of a mural of her slain nephew, Ahmaud Arbery, in Brunswick Ga. on Oct. 5, 2021.
(AP Photo/Russ Bynum)

The chase started when a neighbor who’s not charged in the case called a nonemergency police number after seeing Arbery wandering inside a home under construction, where security cameras had recorded him before.

Dunikoski said Greg McMichael later told police that at one point during the chase he shouted at Arbery, “Stop or I’ll blow your f—-ing head off!”

When a police officer who responded to the shooting asked Greg McMichael if Arbery had broken into a house, he told the officer: “That’s just it. I don’t know … I don’t know. He might have gone in somebody’s house,” according to Dunikoski.

“All three of these defendants did everything they did based on assumptions — not on facts, not on evidence,” Dunikoski said. “And they made decisions in their driveways based on those assumptions that took a young man’s life.”

As Dunikoski played the video of Arbery’s death for the jury, his mother, Wanda Cooper-Jones, cried out in the courtroom and sobbed as her attorney tried to console her.

Rubin described Arbery as a “scary mystery” to residents of a neighborhood already on edge from thefts and property crimes. Travis McMichael saw him outside the home construction site at night 11 days before the shooting. When Arbery reached for his pocket, Rubin said, Travis Michael feared he was reaching for gun.

That’s why the McMichaels grabbed guns before chasing Arbery, Rubin said, insisting they had probable cause to suspect Arbery had been stealing — and therefore at the time could have legally detained him under a Georgia law allowing citizen’s arrests — which was repealed by state lawmakers in response to Arbery’s death.

As Arbery ran toward the McMichaels’ truck, as seen on the video, Travis McMichael raised the shotgun in hopes that “he’s going to deescalate the situation,” Rubin said. Instead of running past, Rubin said, Arbery turned toward Travis McMichael “swinging aggressively” with his fists.

Travis McMichael, Rubin said, recalled his firearms training from when he served in the Coast Guard: “Never lose your weapon. And that’s why he shoots.”

“He has no choice because if this guy gets his gun, he’s dead or his dad’s dead,” Rubin said.

FILE – In this 2012 file photo provided by Yolanda Richardson, of FuzzyRabbit Fotos, Ahmaud Arbery poses for a senior photo on St. Andrews Beach, Jekyll Island, Ga. A judge is expected to delve into the jury selection process at a hearing Thursday, July 22, 2021, for the upcoming murder trial of three men accused of killing Arbery, who was chased and shot after he was spotted running in a Georgia neighborhood. (Yolanda Richardson/FuzzyRabbit Fotos via AP, File)
(AP)

Greg McMichael was in his driveway reupholstering boat cushions when he saw Arbery run past “hauling ass” on the day of the shooting, said Franklin Hogue, Greg McMichael’s defense attorney.

“Greg McMichael was absolutely sure this was the guy, the same guy he had seen on surveillance video inside a house where Greg had sound reasons to believe theft had occurred, burglary,” Hogue said.

Hogue said most facts in the trial are not in dispute.

All three defendants are standing trial together, charged with murder and other felonies.

Arbery had been dead for more than two months when Bryan’s video of the killing leaked online in May 2020. The Georgia Bureau of Investigation took over the case from local police. GBI agents arrested the McMichaels the next day, and charged Bryan two weeks later.

Dunikoski described Arbery as an “avid runner” and told the jury it was not surprising for him to go running in the Satilla Shores subdivision, which was less than 2 miles (3.2 kilometers) from his own home.

When he was killed, Arbery had no weapon and was carrying no wallet or keys, Dunikoski said.

Arbery “couldn’t even have called for help if he wanted to because he had no cellphone on him,” she added.

Controversy erupted Wednesday, the final day of jury selection, when prosecutors objected to a final jury consisting of 11 Whites and one Black juror. They argued that defense attorneys had cut eight potential jurors from the final panel because they are Black, which the U.S. Supreme Court has declared unconstitutional.

Superior Court Judge Timothy Walmsley agreed that there appeared to be “intentional discrimination,” but said Georgia law limited his authority to intervene because defense attorneys stated non-racial reasons for excluding Black panelists from the jury.