THE YOUNG daughter of an Australian firefighter killed battling wildfires wore her father's helmet on her head as she refused to leave his coffin’s side.

The heart breaking scenes came just moments after one-year-old Charlotte O’Dwyer accepted the service medal which was posthumously awarded to her father, Andrew O’Dwyer, by the Rural Fire Service on Tuesday, following his death just before Christmas. 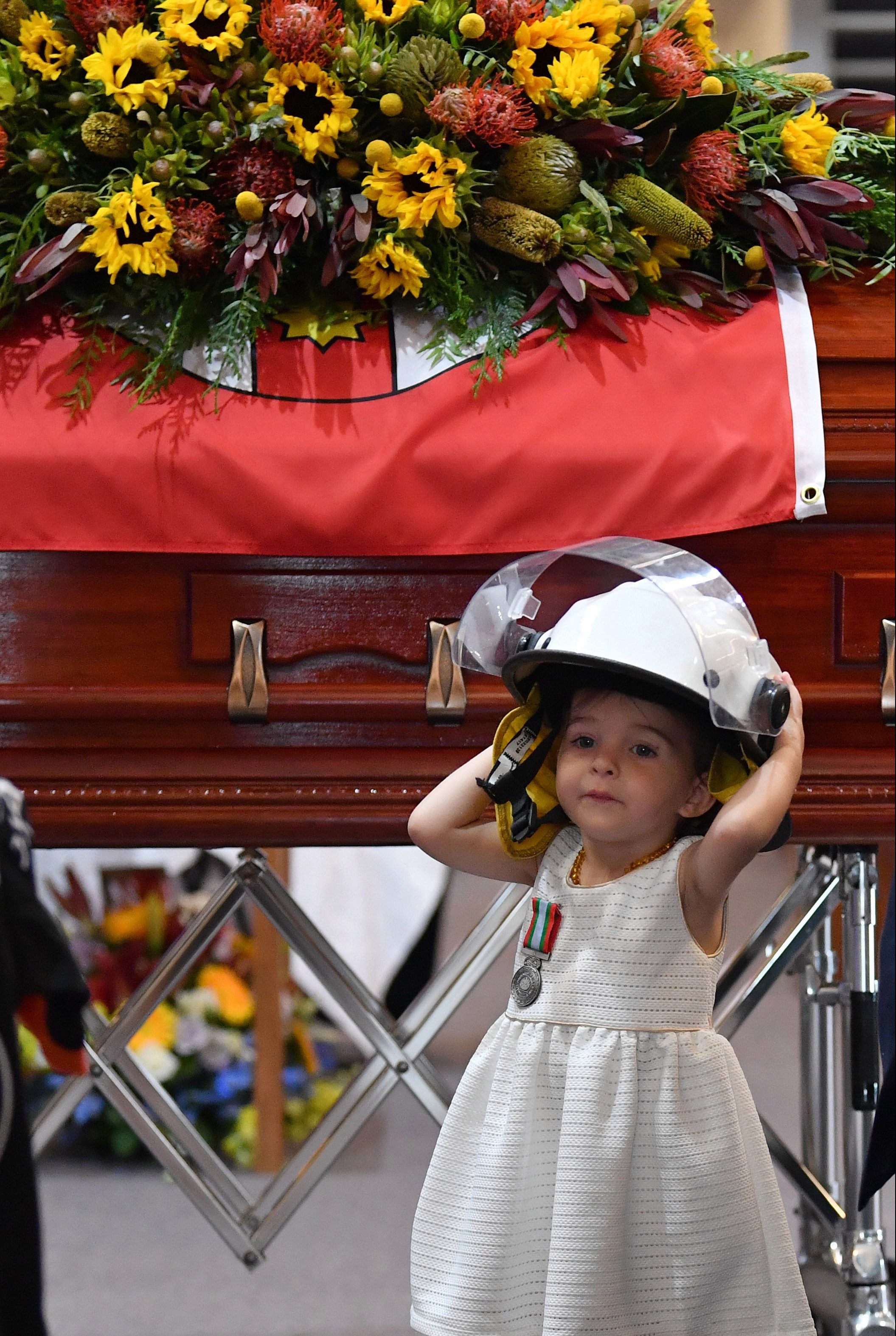 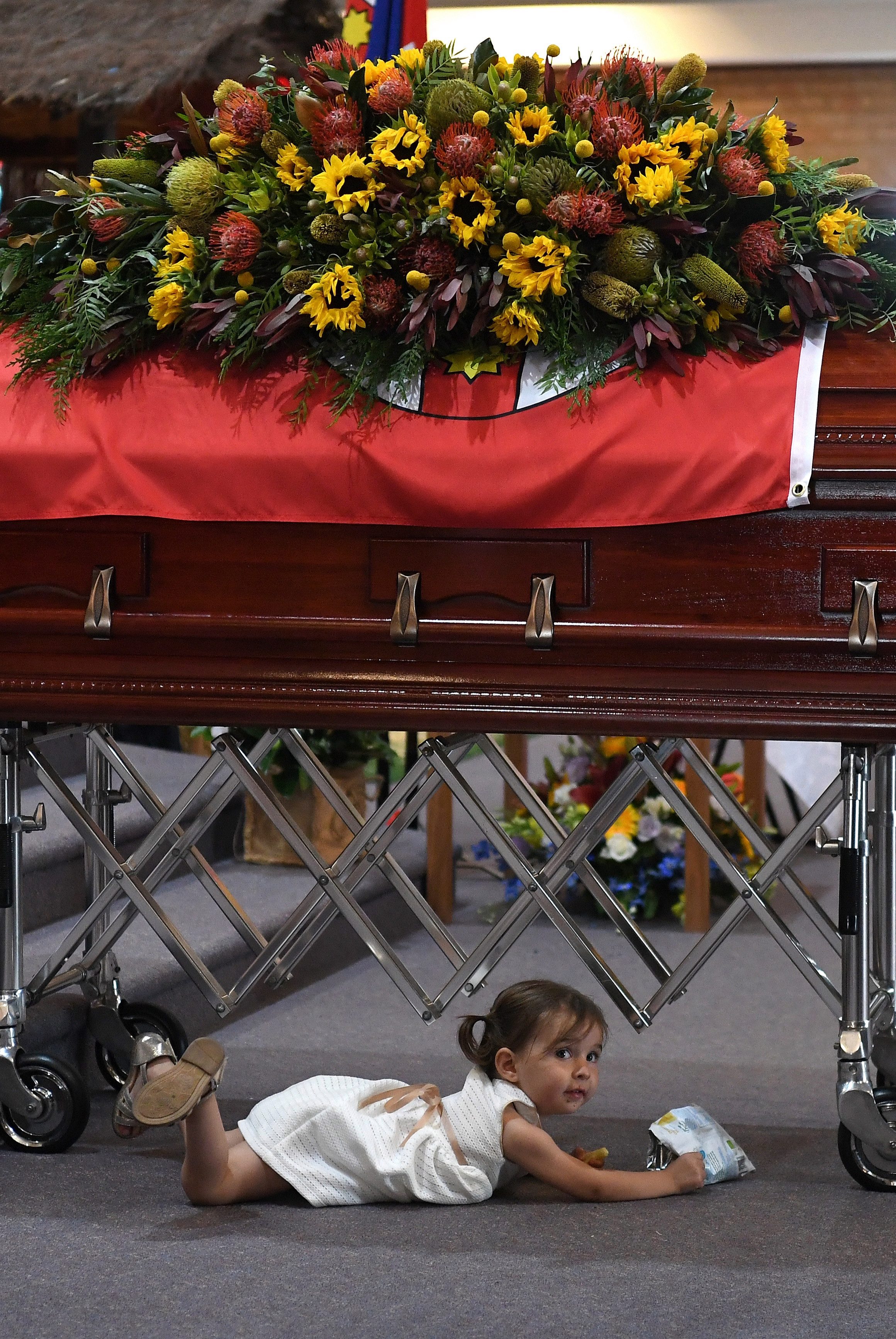 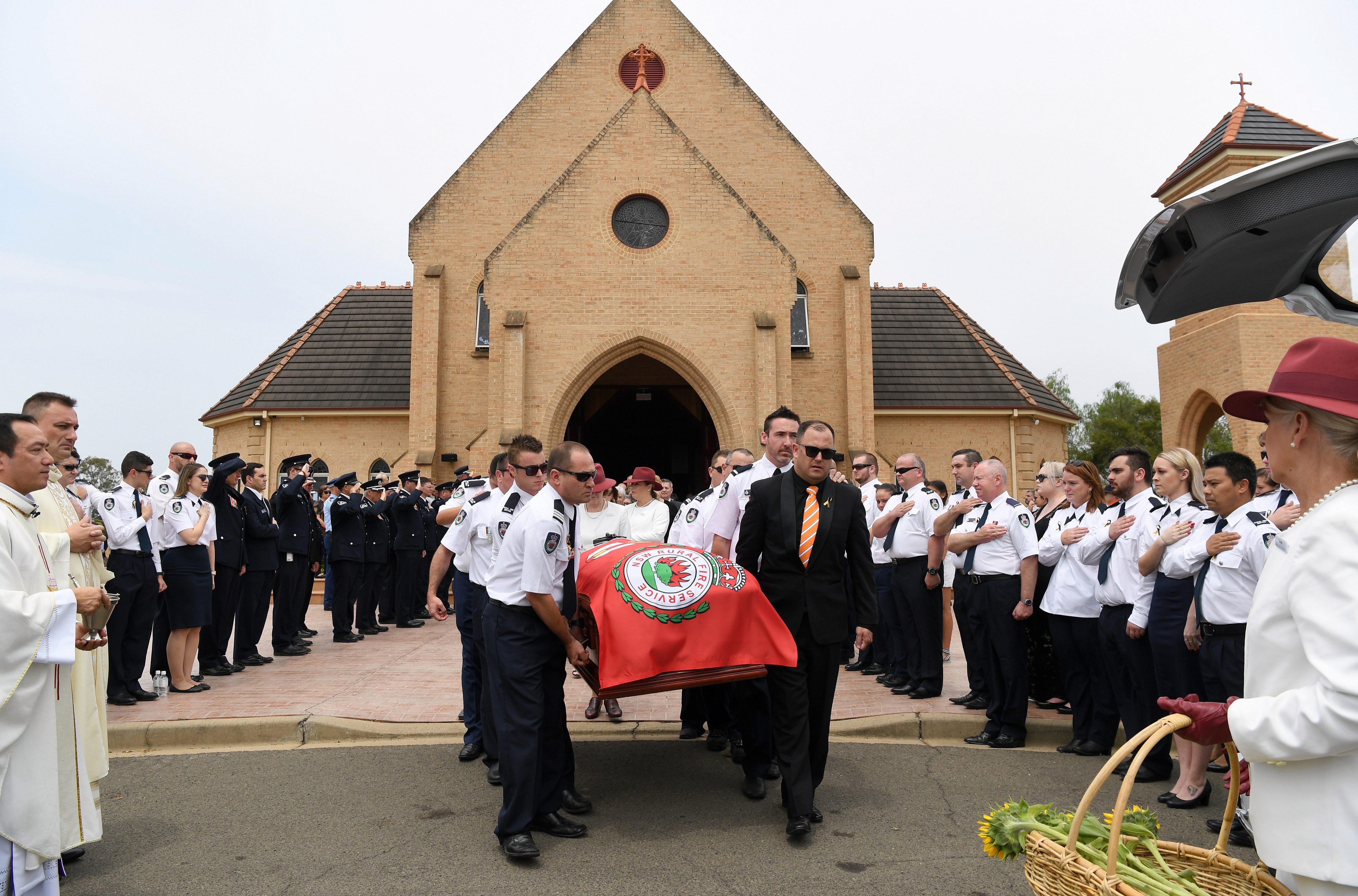 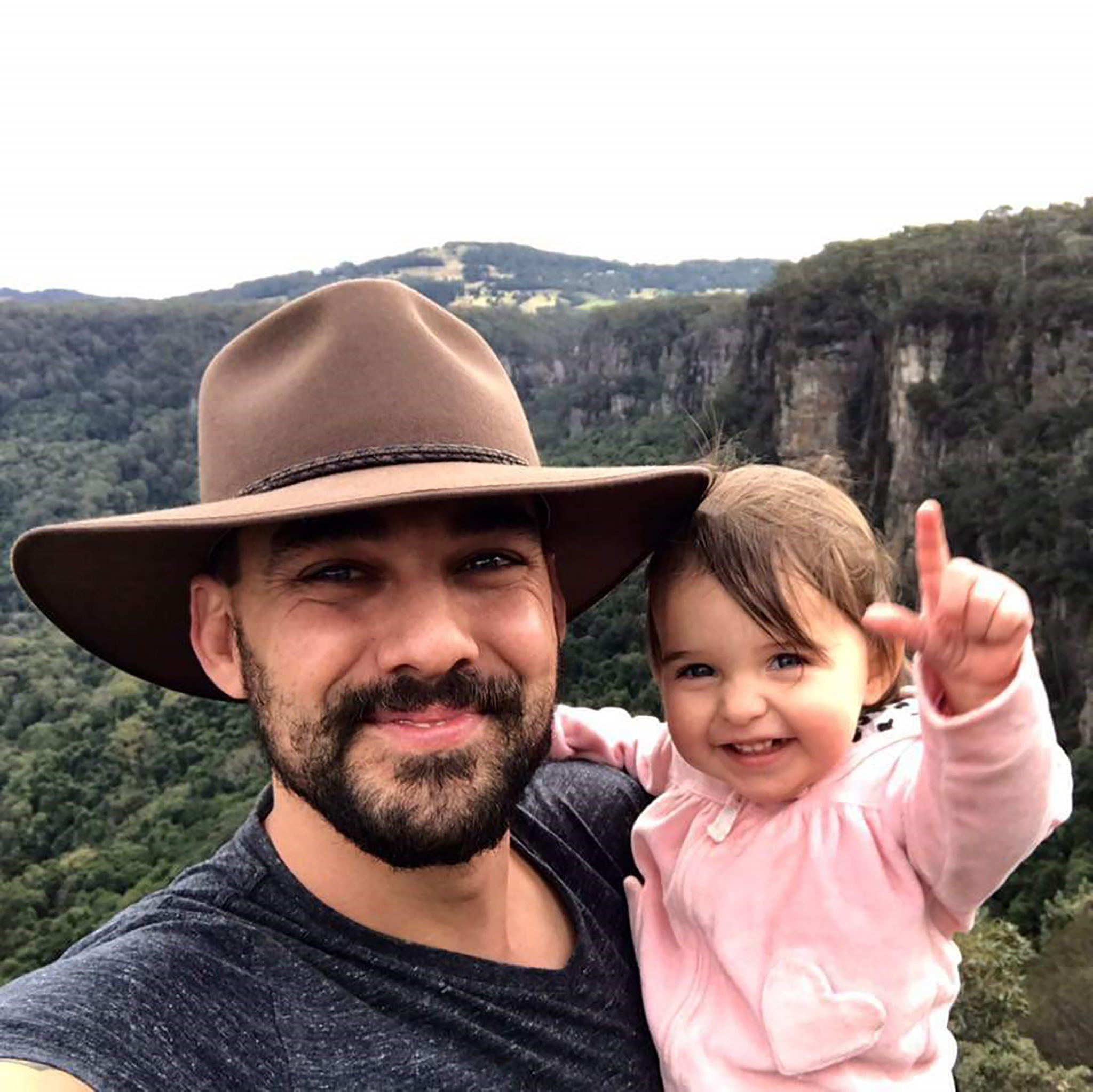 Wearing a white dress with her hair in pigtails, Charlotte at one stage touched her father’s casket before wandering up to the pulpit at Our Lady of Victories church in Horsley Park, the suburb where Mr O’Dwyer’s RFS brigade is based.

The young girl, described as her father’s greatest achievement, brought a much needed smile to the face of mourners as she lay under Mr O’Dwyer’s casket and ate from a bag of chips.

Mr O’Dwyer, 36, died in December when his fire truck rolled while battling the large Green Wattle Creek blaze in the NSW town of Buxton.

The brigade's deputy captain Geoffrey Keaton, who like Mr O'Dwyer was a father-of-one, also died in the tragic crash and was remembered at a separate service last week.

Firefighters formed a guard of honour as Mr O’Dwyer’s casket was carried into the church with some saluting and others putting their hand on their heart. 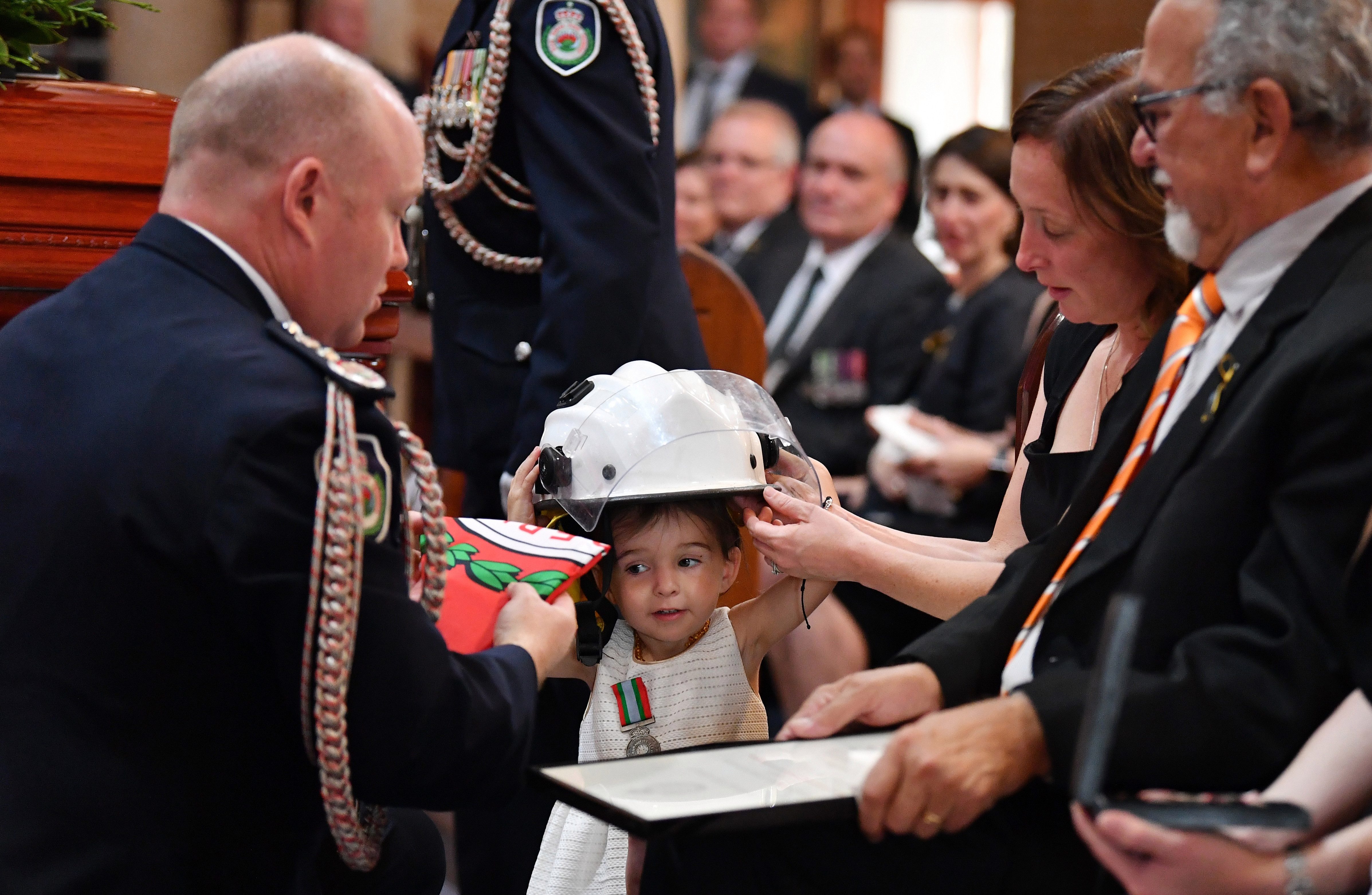 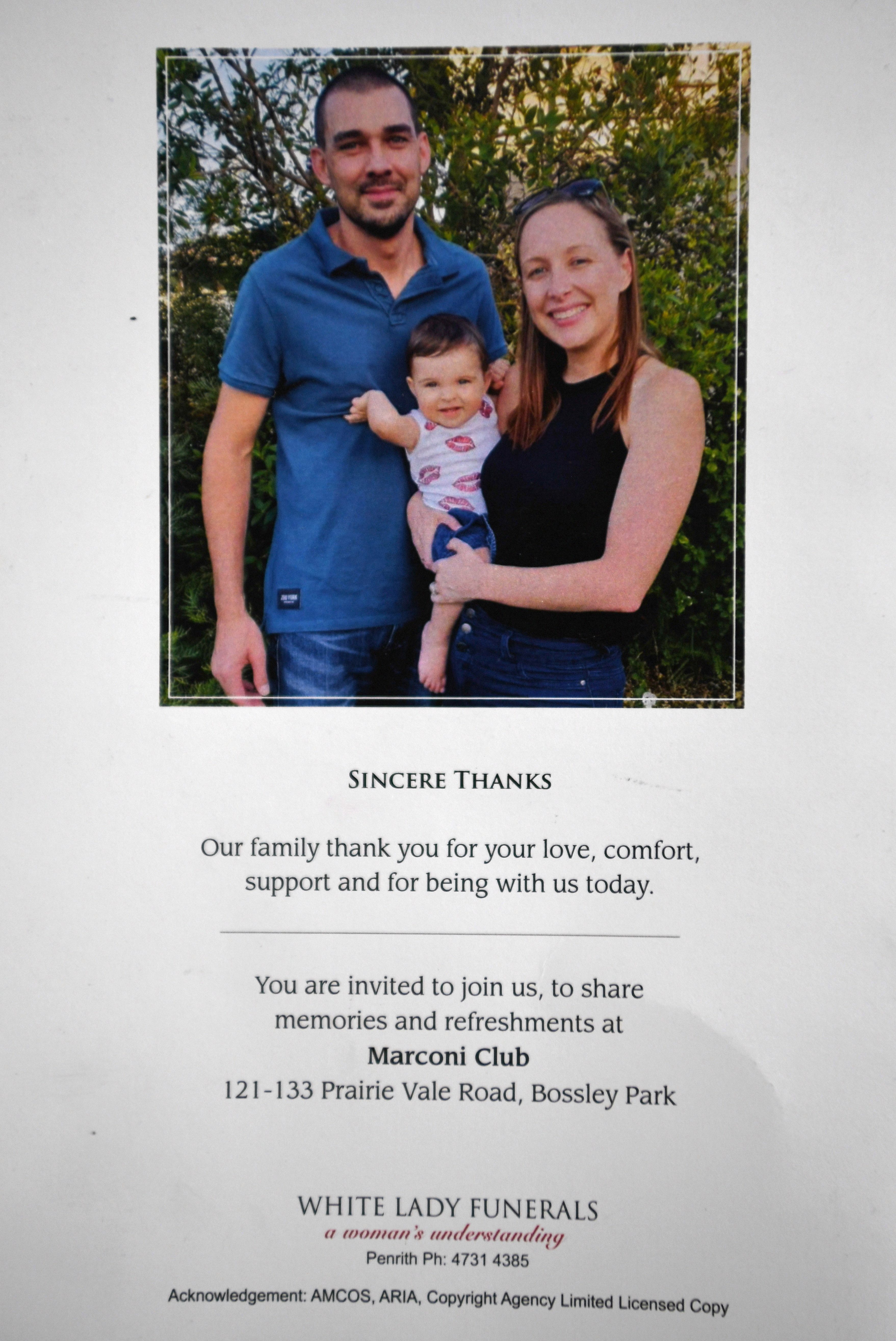 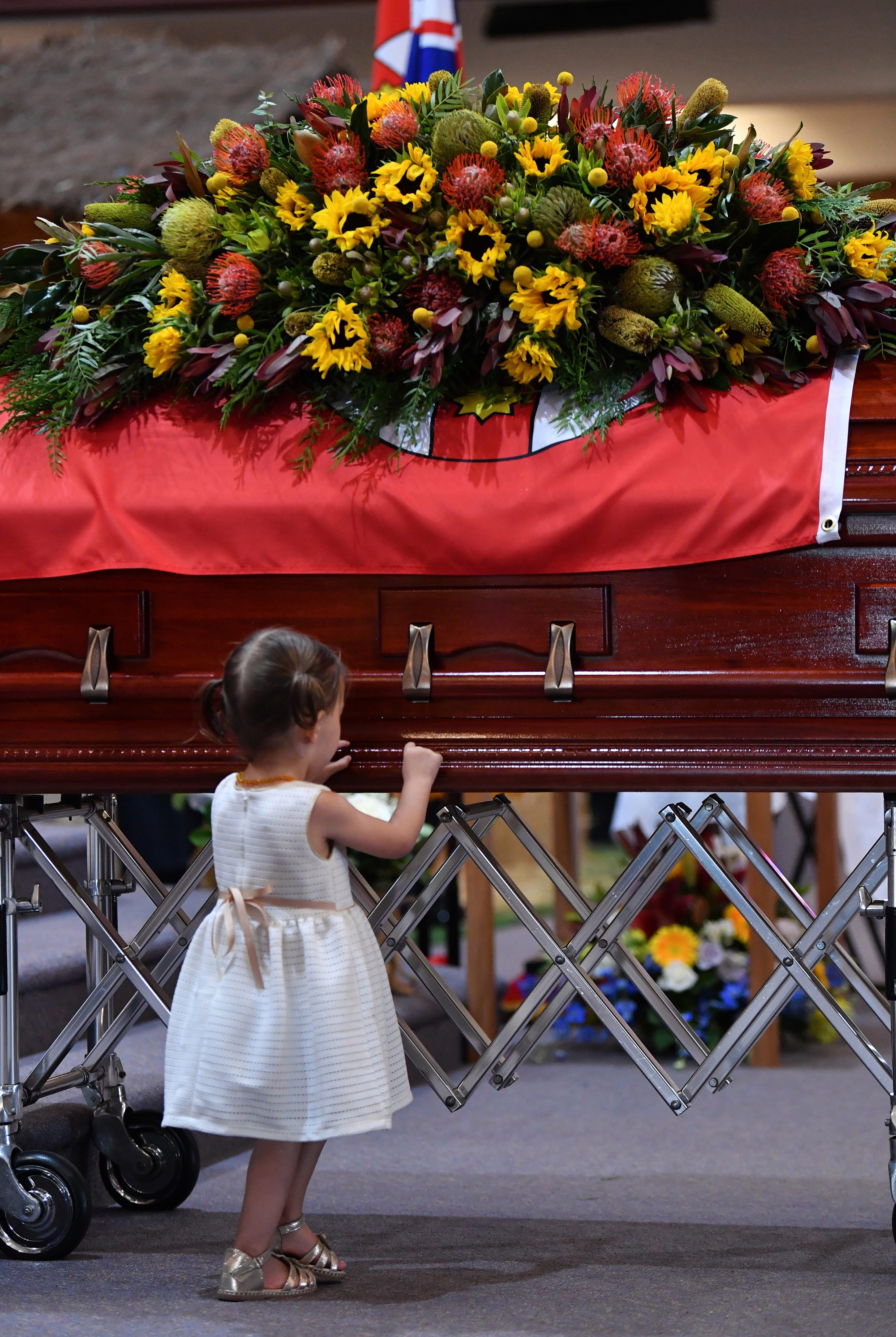 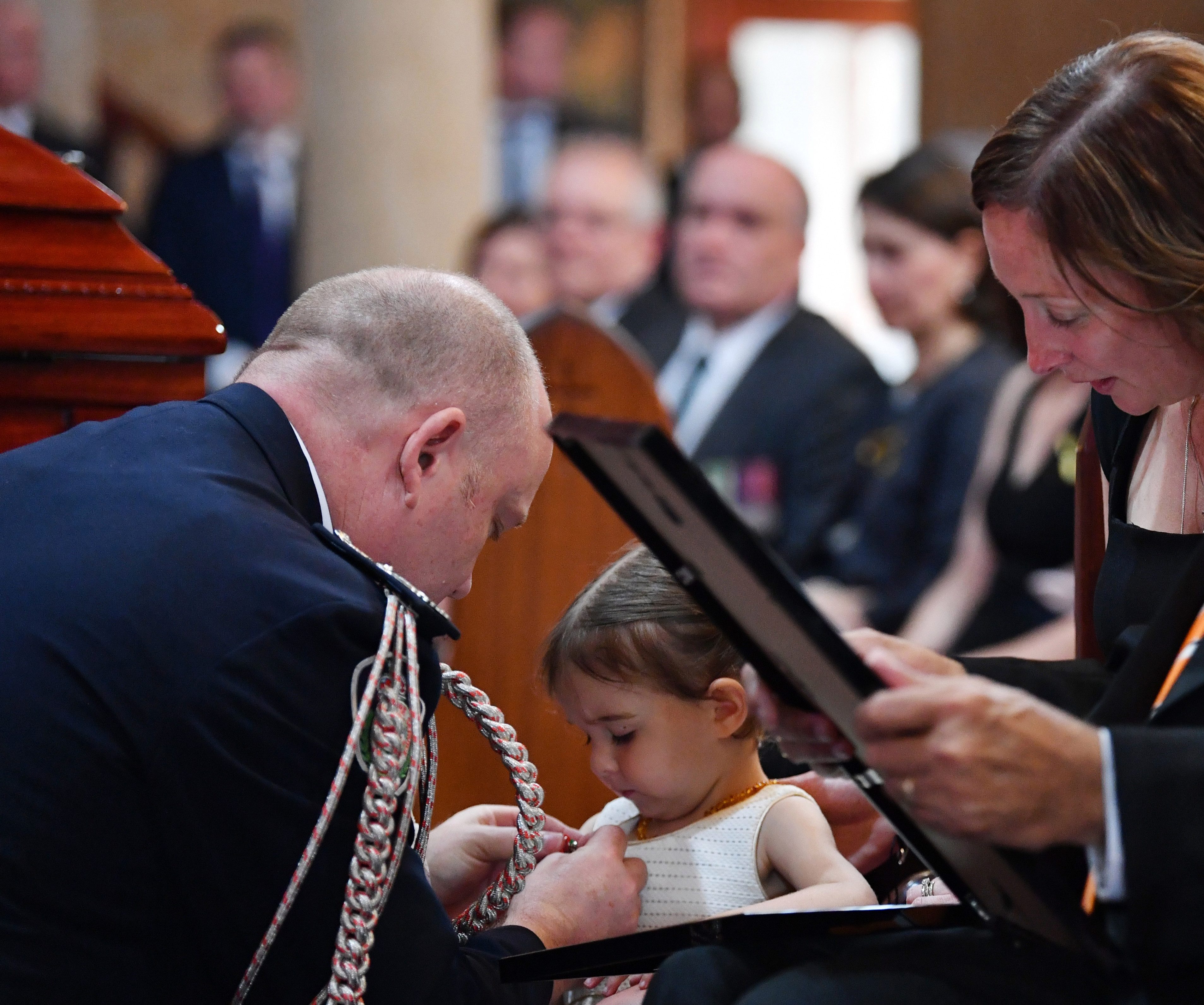 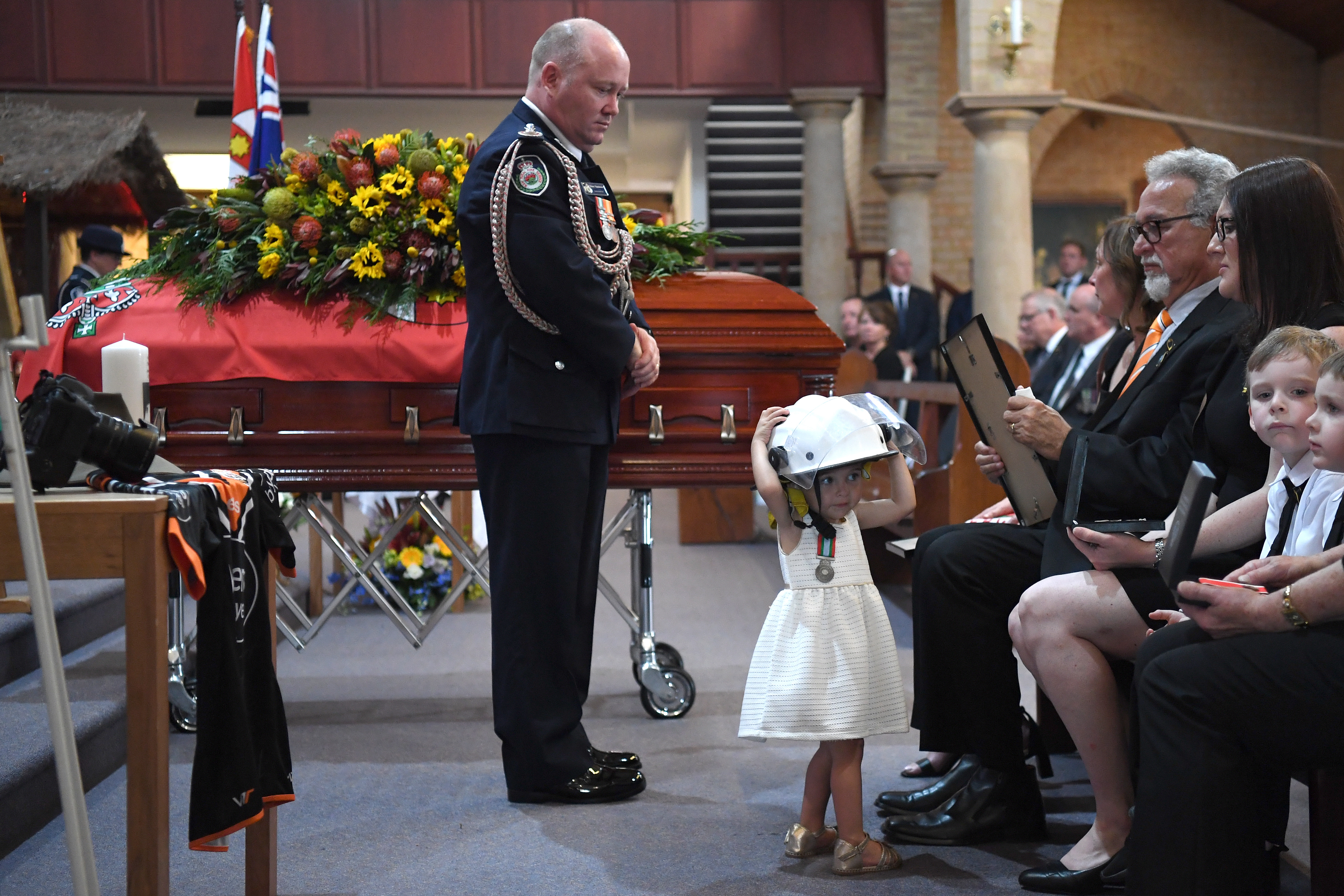 Rural Fire Services commissioner Shane Fitzsimmons was brought to tears while he addressed young Charlotte and her mother, Melissa.

In his eulogy just minutes earlier, Mr Fitzsimmons told the little girl her daddy was a “hero”.

He told the packed church: “Charlotte should know her father was a selfless and special man, who only left because he was a hero.”

“There are no words that can adequately describe our sorrow, our respect, our regard, for the loss of Andrew … in that tragic accident.”

Church bells tolled as Mr Fitzsimmons went on to present a commendation for extraordinary service to Mr O’Dwyer’s wife, Melissa.

Outside the service, a tearful Ms O'Dwyer carried Charlotte in her arms before lowering her down so she could give her hero father's coffin a kiss goodbye.

His coffin was draped in a bright red NSW Rural Fire Service flag and carried by friends.

Mr O’Dwyer’s father Errol said farewelling his son was the hardest thing he had ever done, and described his son as a free spirit who lived in the moment.

He said his greatest achievement came “with the birth of his daughter Charlotte, the apple of her father’s eye.

He added: “Although my heart is broken you have made me very proud.” 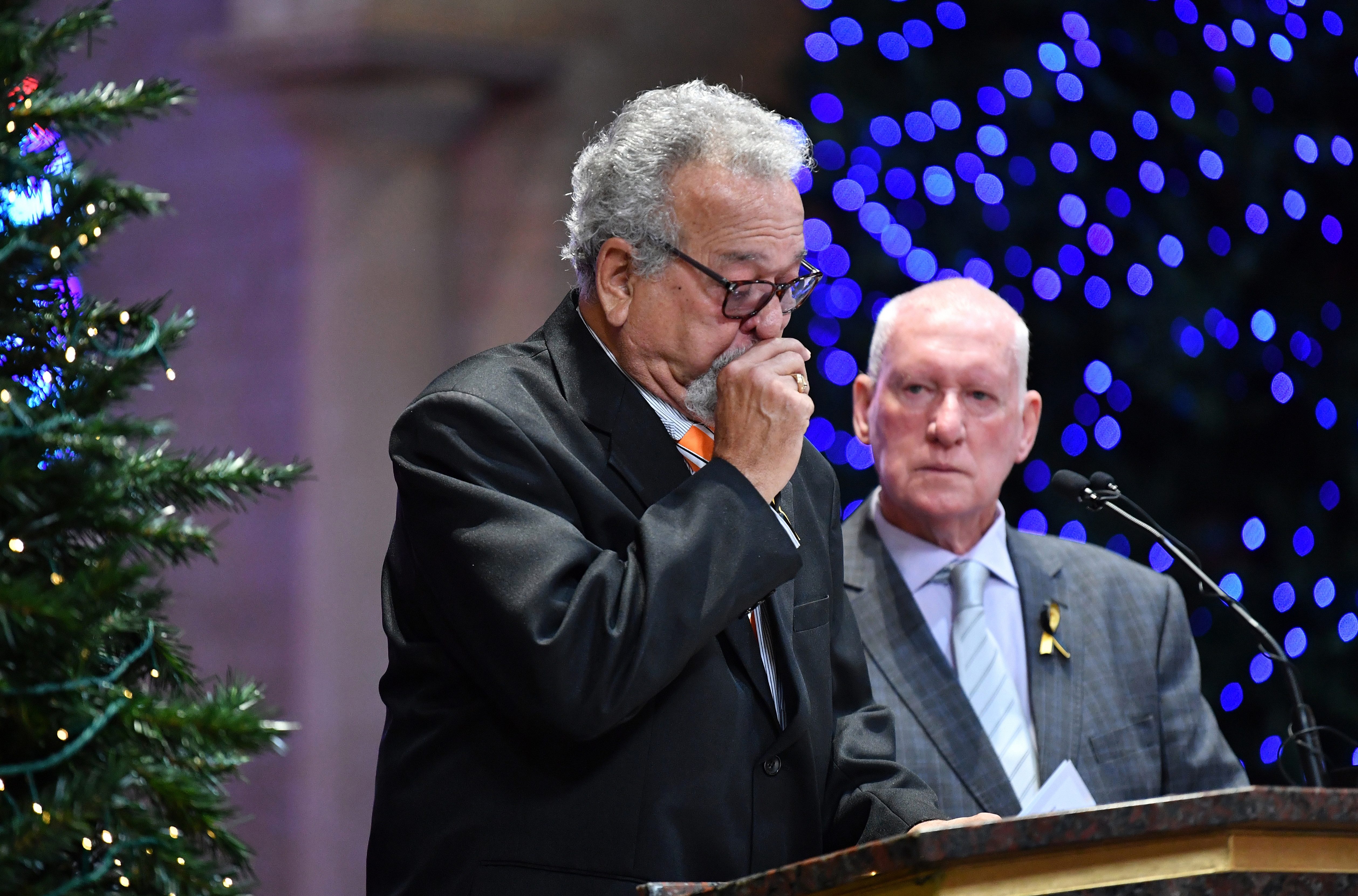 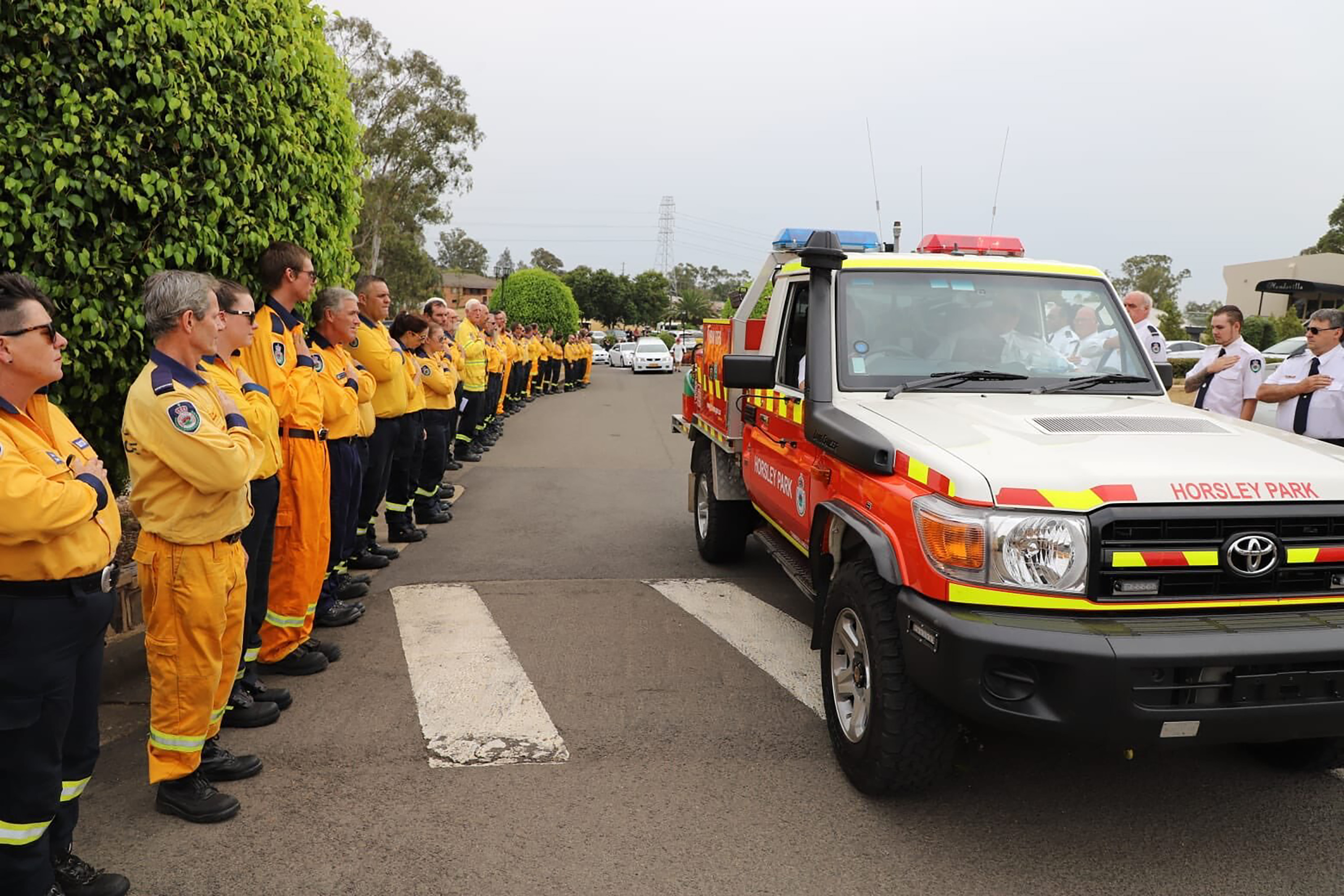 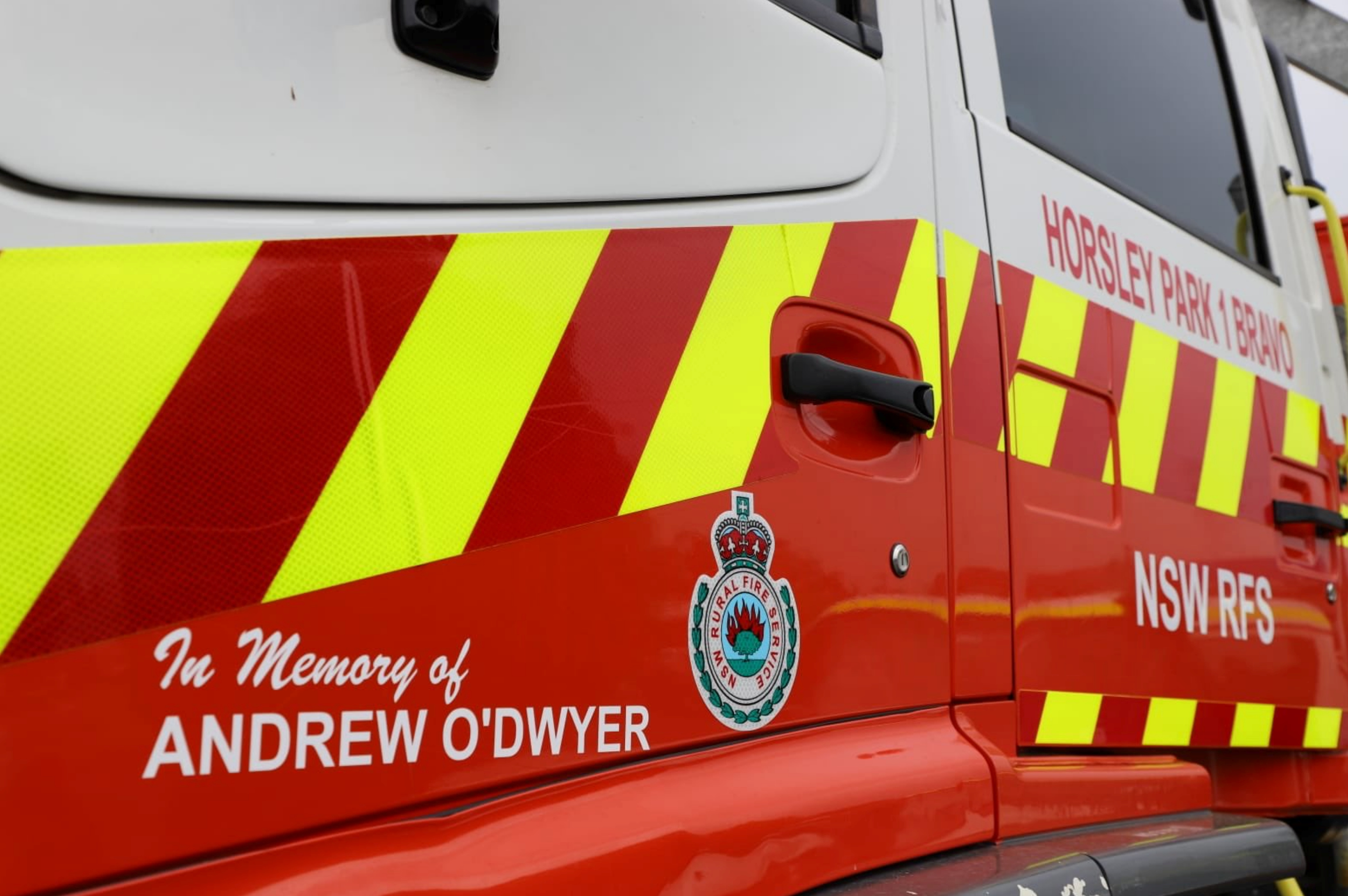 As the procession made its out of the church grounds, members of the Maori community performed an impromptu haka outside in tribute to their fallen colleague.

In a moving tribute, a Horsley Park RFS fire truck will forever have 'in memory of Andrew O'Dwyer' written on the passenger side door.

Discussions are also planned for a permanent memorial to be erected for the two fallen fathers, and firefighters.

The bushfires in Australia have so far killed at least 24 people, and more than 200,000 homes have been destroyed in the raging infernos.

Experts fear the devastating Australian wildfires have killed a billion animals since the season began in August last year. 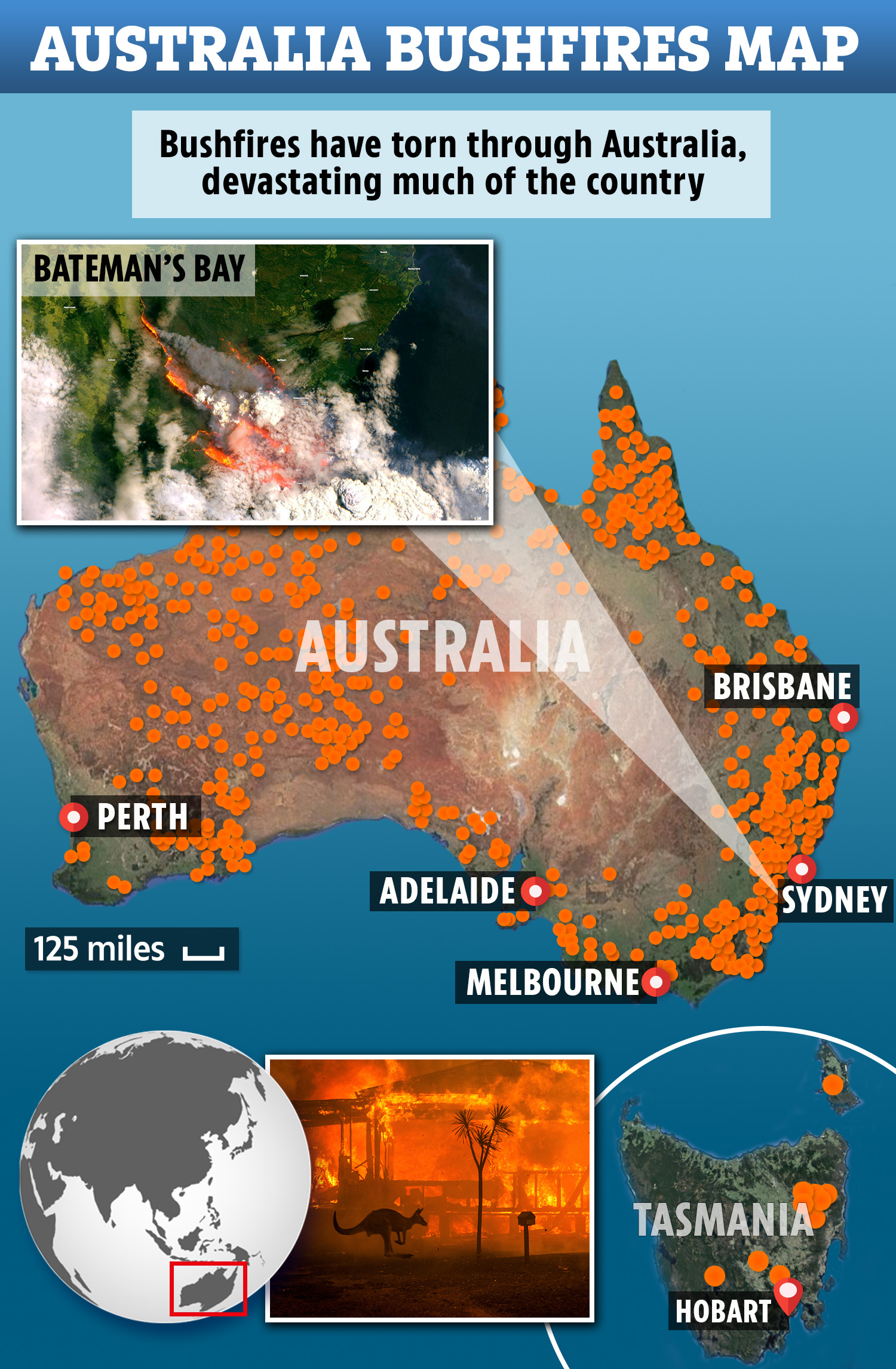 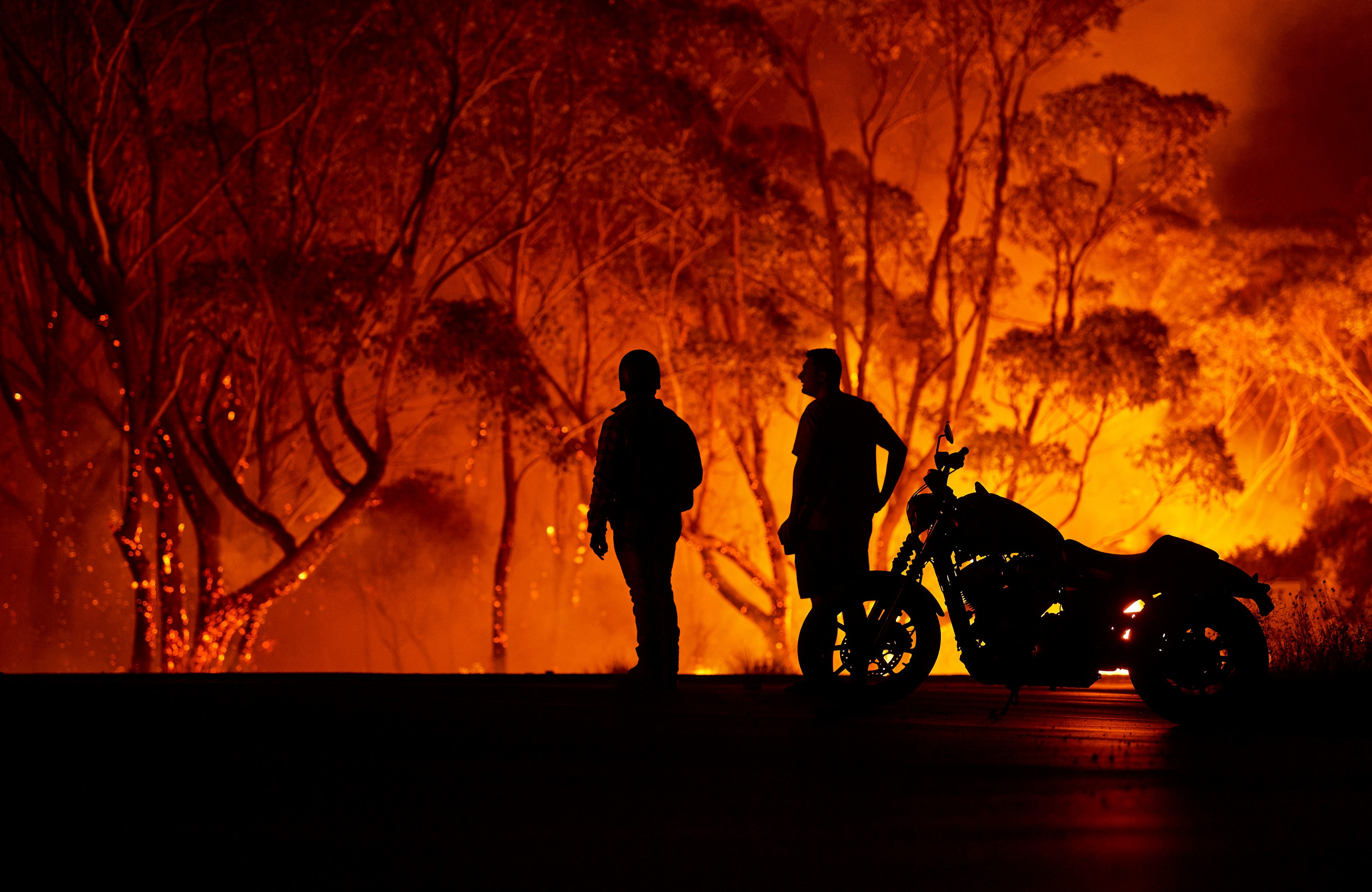 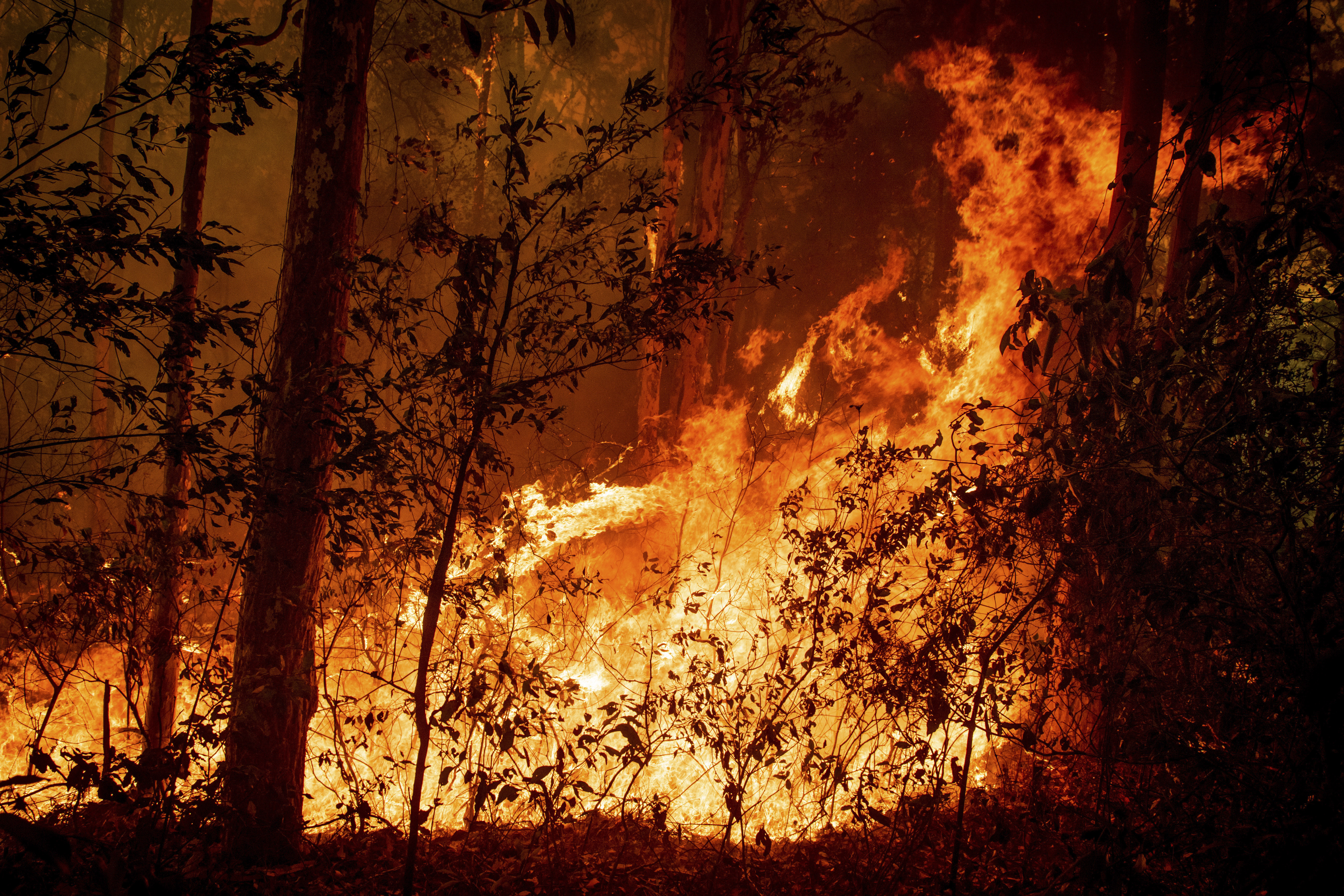