We have made our live coverage of the coronavirus pandemic free for all readers. Please consider supporting our journalism with a subscription.

The Melbourne Cup is back.

The race that stops the nation is set to host Melbourne’s largest crowd in three months. Around 10,000 spectators are expected to flock to the inner north-west suburb of Flemington.

Crowds usually number in the hundreds of thousands (except for last year when no crowds were allowed).

And due to Melbourne’s latest easing of coronavirus restrictions, racegoers won’t have to pair a mask with their outfit while they’re outdoors.

Incentivise is this year’s Cup favourite, with the racehorse drawing comparisons to Phar Lap.

Government and health authorities are optimistic NSW can achieve 95 per cent COVID-19 vaccination coverage, as the Premier continues to suggest that figure could be key to the next stage of the state’s reopening.

Yesterday, data released by the federal government showed 93.6 per cent of NSW residents aged 16 and over had received a first dose of a COVID-19 vaccine and 87.8 per cent were fully vaccinated.

Just 13 council areas in NSW had a full vaccination rate below 80 per cent. Demographers have said some of these results, particularly the City of Sydney and Randwick, were likely an underestimate due to out-of-date population data.

Other areas, such as Byron Shire, had a later uptake: the northern NSW town known for its large anti-vaccination population has a first-dose rate of nearly 85 per cent, suggesting it will hit 80 per cent double-dose by the end of the month. Only the City of Sydney and Edward River in southern NSW reported first-dose rates below 80 per cent.

More on the situation in NSW here.

Prime Minister Scott Morrison has hit back in his extraordinary row with President Emmanuel Macron over claims that he lied about a $90 billion submarine contract, citing secret text messages as proof that he gave the French leader fair warning the deal would be dumped.

One day after Mr Macron accused him on camera of lying about the deal, Mr Morrison revealed more details about their private talks to justify the way he cancelled the contract and formed a submarine alliance with the United States and the United Kingdom. 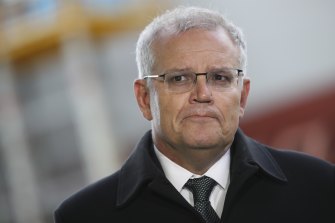 Prime Minister Scott Morrison speaks to the media in Glasgow about the row over the cancelled submarine deal with France.Credit:Alex Ellinghausen

But Mr Morrison admitted that he did not tell Mr Macron he was negotiating the US and UK deal, saying this was too confidential to disclose, although he told the French President in June that Australia was looking at alternatives.

Asked whether Mr Macron deserved more than 48 hours’ notice of the pivotal decision given he leads a NATO power and is a longstanding Australian ally, Mr Morrison said that he had to keep the US and UK alliance confidential.

More on this story here.

Cleo disappeared from her family’s tent at the Quobba Blowholes, a popular camping ground 50 minutes drive from her home in Carnarvon, some time between the hours of 1.30am and 6am on October 16. 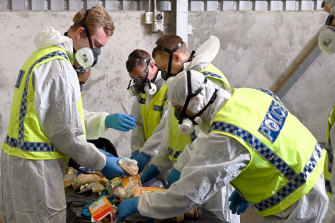 Police search through rubbish in an effort to find clues in the case of missing four-year-old Cleo Smith. Credit:WA Police

The fact that her sleeping bag was also missing and the tent zip would have been out of reach for such a young child has led police to believe she was abducted.

The search for Cleo which has expanded to include the Australian Federal Police and homicide detectives is into its third week.

This morning’s headlines at a glance

Good morning and thanks for reading our live coverage.

I’m Broede Carmody and as usual I’ll bring you some of the morning’s biggest stories as they unfold.

Here’s what you need to know before we get started.