Former special forces soldier Ben Roberts-Smith lost almost half a million dollars in earnings because of his “smashed” reputation, his barrister told his Federal Court defamation trial on Tuesday.

But with legal costs and aggravated damages, the total claim against The Age and The Sydney Morning Herald is likely to run into the millions if he wins the high-stakes case. 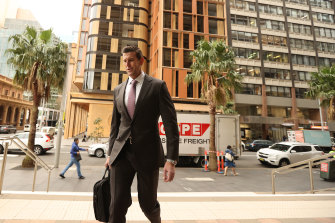 Ben Roberts-Smith arriving at the Federal Court in Sydney on Tuesday morning.Credit:Dylan Coker

In his opening address to the court, which continued on Tuesday, Mr Roberts-Smith’s barrister, Bruce McClintock, SC, said his client’s paid public speaking engagements “evaporated” after the news outlets published allegations in 2018 of war crimes and domestic violence against the Victoria Cross recipient.

Mr McClintock said an accountant would be called by Mr Roberts-Smith’s legal team and would give evidence that the former soldier had lost an estimated $475,000 in work until the end of last year as a result of the articles. He had previously had a profitable career in public speaking, he said. Future losses would also be estimated.

Mr Roberts-Smith is seeking damages for past and future economic loss as well as compensatory and aggravated damages and, on Monday afternoon, the first day of the trial, Mr McClintock said he was seeking “the largest award of aggravated damages ever in this country” for what he said was a false allegation of murder levelled against his client.

He said on Tuesday it was “not a competition” to set a damages record but the damages must be “commensurate with the harm” and the more serious the attack on a person’s reputation the higher the award. 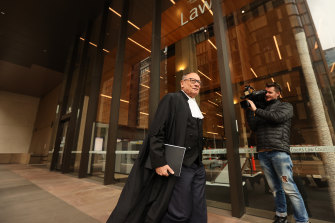 “There are allegations of murder and war crimes. There really can be nothing more serious than that,” he said.

He said a domestic violence allegation was “itself extremely serious [and] … inordinately damaging to my client”.

He said that before the articles Mr Roberts-Smith couldn’t have had a “higher reputation” and the effect of the publications was to “smash and destroy that reputation”.

Mr Roberts-Smith launched the defamation lawsuit in 2018 over reports that he says accused him of murder during his 2009 to 2012 tour of Afghanistan and committing an act of domestic violence against a woman with whom he was having an extramarital affair. Along with the two media outlets now owned by Nine, he is suing three journalists and The Canberra Times, which is now under separate ownership. 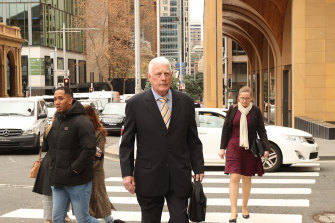 He denies all wrongdoing. The media outlets are seeking to rely chiefly on a defence of truth.

In late May the newspapers withdrew one element of their defence, related to the alleged killing of an unarmed Afghan. They had initially described the killing as murder. The newspapers are still seeking to prove that Mr Roberts-Smith killed that unarmed man, and committed six murders. Mr McClintock accused the media outlets of making a murder allegation without basis and said on Monday this justified a record award of aggravated damages.

The law is set to change in Australia later this year to stop the cap on compensatory damages being abolished in such cases.

Mr Roberts-Smith stood down from his role as general manager of media company 7Queensland and Seven Brisbane in April to focus on the defamation trial. He joined Seven in 2014.

Actor Geoffrey Rush holds the record for the largest defamation payout to a single person in Australia, with a $2.9 million payment including a substantial figure for economic loss.

Sydney newspaper The Daily Telegraph agreed in 2019 to pay the actor almost $1.98 million for lost earnings, on top of an $850,000 damages payout including aggravated damages, for a series of reports accusing him of “inappropriate behaviour” towards a female actor.

Mr McClintock had previously announced in open court that he would be calling former governor-general Quentin Bryce as a reputational witness for his client.

On Tuesday he said that “Quentin Bryce her excellency has indicated … that she has never withdrawn her support for Mr Roberts-Smith but she won’t be appearing as a witness for personal reasons”.

He said that Dame Quentin had “not withdrawn her support for my client”, as set out in a letter in March 2019.

But the media outlets’ barrister, Nicholas Owens, SC, objected to the tender of the 2019 letter and said he wasn’t in a position to test that assertion by questioning Dame Quentin in court.

Mr Roberts-Smith is expected to start giving evidence on Wednesday. The bulk of Mr McClintock’s opening address on Tuesday was held behind closed doors to preserve the secrecy of national security information.