Ben Roberts-Smith told his former wife he would sue her and seek to overturn a property settlement if she disclosed to lawyers acting against him in a defamation case any information she had agreed to keep confidential, the Federal Court has heard.

Mr Roberts-Smith, a former special forces soldier and Victoria Cross recipient, is suing the Herald and The Age, owned by Nine Entertainment Co, over a series of stories published in 2018, which he says are defamatory because they portray him as a war criminal. He vigorously denies wrongdoing. 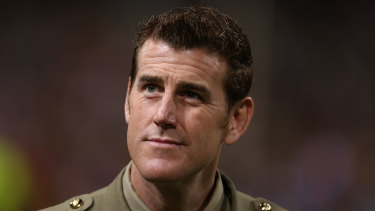 A trial, expected to take six to eight weeks, will begin in Sydney on June 7. The media outlets are seeking to rely on a defence of truth.

At a preliminary hearing in the Federal Court on Thursday, barrister Nicholas Owens, SC, for the media outlets, alleged Mr Roberts-Smith told his former wife, Emma, in a letter in April that if she spoke to lawyers for the Herald and The Age about potential evidence she might give in the case he would seek an injunction, attempt to sue her and take steps to undo a property settlement between them.

The court heard the parties had entered into a confidentiality agreement as part of that settlement.

Bruce McClintock, SC, acting for Mr Roberts-Smith, said the confidentiality agreement had been struck between two legally-represented parties and “we do not waive” it.

“We’re simply not in a position to do so,” Mr McClintock said, and alluded to court orders relating to the agreement.

Mr McClintock said that if Ms Roberts did give evidence he would have to cross-examine her in court, and suggested the media outlets should “re-think what they’re doing” involving his former wife in the proceedings because “sometimes you can pay too high a price” involving family members in proceedings.

Mr Owens said this was an “egregious submission”. He foreshadowed that evidence given by Ms Roberts would be along the lines of the alleged intimidation of witnesses, attempts to communicate covertly with witnesses and the alleged concealment of material.

As part of their defence, the news outlets are seeking to include evidence from Ms Roberts, one of her friends, and a man who claims the former soldier attempted to intimidate a witness in an investigation into alleged war crimes. Mr Roberts-Smith’s lawyers want to see outlines of the proposed evidence before the trial.

A joint investigation by The Age, the Herald and 60 Minutes, aired earlier this month, alleged Mr Roberts-Smith dug a hole in the backyard of his Queensland house and buried USB drives inside a lunchbox to hide them from both police and military investigations.

Mr McClintock said on Thursday that his client denied burying anything in the backyard and denied concealing “any evidence or any relevant material” at all.

Mr Owens said that it was incorrect to say the allegation of concealment of evidence was wrong.

The court heard Mr Roberts-Smith had notified the Commonwealth Attorney-General that he had USBs in his possession and he believed they would disclose national security information.

Mr McClintock said it was not clear that the trial would be completed in two months. He has proposed that Mr Roberts-Smith give evidence first in the trial.