Betty White, TV's perennial Golden Girl, has died. She was 99.

"Even though Betty was about to be 100, I thought she would live forever," her agent and close friend Jeff Witjas tells PEOPLE in a statement on Friday. "I will miss her terribly and so will the animal world that she loved so much. I don't think Betty ever feared passing because she always wanted to be with her most beloved husband Allen Ludden. She believed she would be with him again."

White was gearing up to celebrate her 100th birthday on Jan. 17. Ahead of her centennial year, in January, White opened up to PEOPLE about how she was feeling about turning 100 years old.

"I'm so lucky to be in such good health and feel so good at this age," said the veteran actress. "It's amazing."

According to White, being "born a cockeyed optimist" was the key to her upbeat nature. "I got it from my mom, and that never changed," she said. "I always find the positive."

Of course, the iconic actress also cracked a joke about the secret to her long life, telling PEOPLE: "I try to avoid anything green. I think it's working." 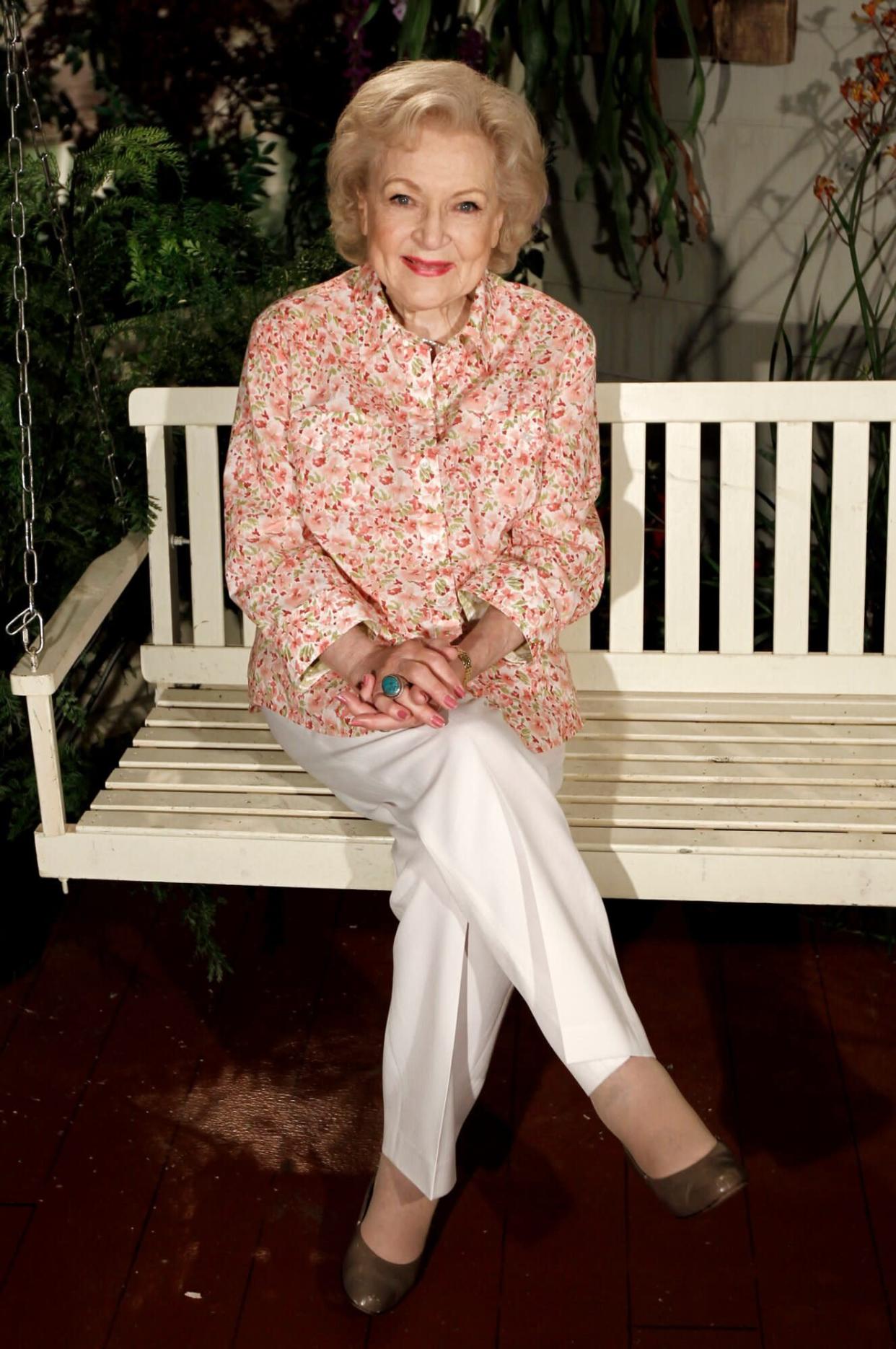 A warm and popular presence on the small screen, White's career dated back to the early days of the medium and spanned decades. Long before her hilarious turns on The Mary Tyler Moore Show in the '70s and The Golden Girls in the '80s, in 1952 she appeared in the I Love Lucy-like Life with Elizabeth, a show she also produced.

In 2010, at age 87, she enjoyed an award-laden resurgence, when, after starring on a Snickers commercial during the Super Bowl, polls and petitions overwhelmingly named her the public's choice to host Saturday Night Live, emcee various awards shows and even be a sergeant's date at a Marine Corps ball.

After that, she went on to star and steal scenes on the TV Land sitcom Hot in Cleveland, even scoring an Emmy nomination — her 17th, including seven wins. In May 2012 she also debuted on the NBC comedy reality show Betty White's Off Their Rockers, a kind of geriatric Punk'd. As always, she proved a favorite.

RELATED: Betty White Reveals Her Secrets to a Happy Life at 100: 'I'm So Lucky to Be in Such Good Health'

Born Jan. 17, 1922, in Oak Park, Illinois, Betty Marion White, an only child, moved with her parents, traveling salesman and electrical engineer Horace White and homemaker Tess Curts White, to Los Angeles during the Great Depression. Camping once a year in the Sierra Nevadas with the folks fueled a love of animals. "We wound up with 26 dogs once," White told PEOPLE in 1999.

As a child, she fantasized about becoming a forest ranger or a writer, only to fall in love with performing when she took the lead in the high-school senior play that she wrote. She skipped college, but before launching an acting career she married twice: first to Dick Barker, a WWII pilot she wed in 1945 (the marriage lasted only a few months once he took her home to an Ohio chicken farm), then in 1947 to agent Lane Allen, who wanted her to give up showbiz.

When that marriage ended in 1949, she and an L.A. deejay named Al Jarvis got their feet wet together on local TV, which eventually paved the way for her first sitcom, the nationally syndicated Life with Elizabeth. Despite its low budget and minimal sets (indeed, the show was a series of domestic skits featuring White's daffy Elizabeth and her exasperated husband Alvin, played by Del Moore), the show earned White her first Emmy. 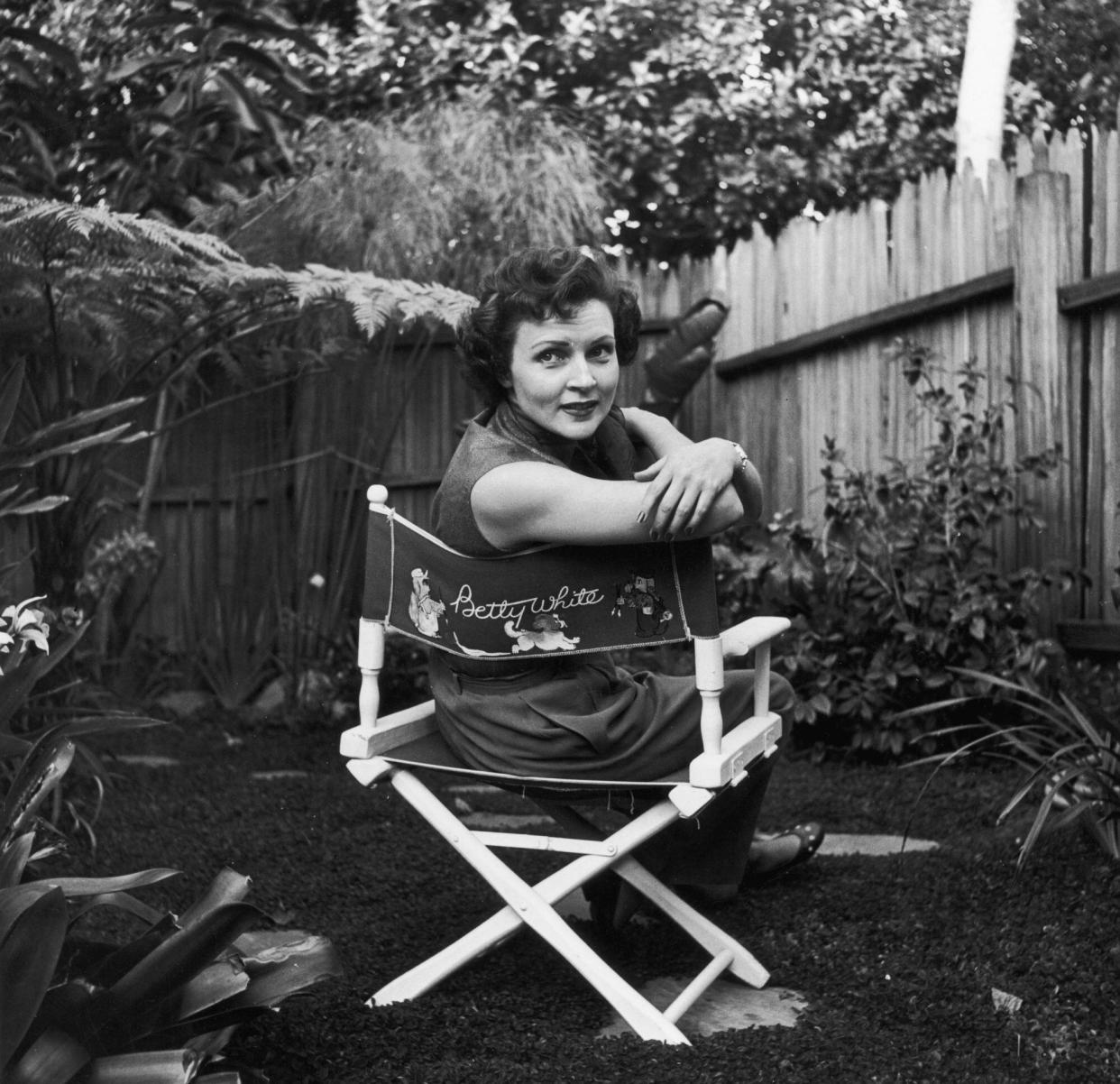 Other series came and went in the '50s, and by 1961 White appeared as a celebrity player on the daytime game show Password, hosted by Allen Ludden. A widower with three children, he proposed marriage to the actress in 1963, and she accepted that Easter. He sent her "this adorable fluffy white stuffed bunny," she later told PEOPLE, "and in its ears were gold leaves with ruby, diamond and sapphire earrings."

Ever after, White referred to Ludden as the love of her life. "The secret to our marriage was enthusiasm," White said. "When I knew Allen was coming home, I would freshen my makeup and put on a new blouse."

Ludden, 63, died of stomach cancer in 1981. They had been married 18 years, during which White triumphed from 1973–77 on The Mary Tyler Moore Show thanks to some image-busting casting. She played TV station WJM's "Happy Homemaker" Sue Ann Nivens, a relentlessly man-hungry careerist.

Though she bravely carried on after Ludden's death, White admitted, "If one more person said, 'Oh, you're so strong,' I would have decked them."

White's career in entertainment began in the 1940s after she graduated from high school. She began working in radio and later got her own show, called The Betty White Show. In 1949, she became co-host with Al Jarvis on his daily variety show Hollywood on Television in Los Angeles.

After Jarvis left the show in 1952, White began hosting by herself, working five and a half hours of live ad-lib television six days a week for four years. She was nominated for her first Emmy Award in 1951 as best actress on television. It was the first award and category in the new award show designated specifically for women in television. 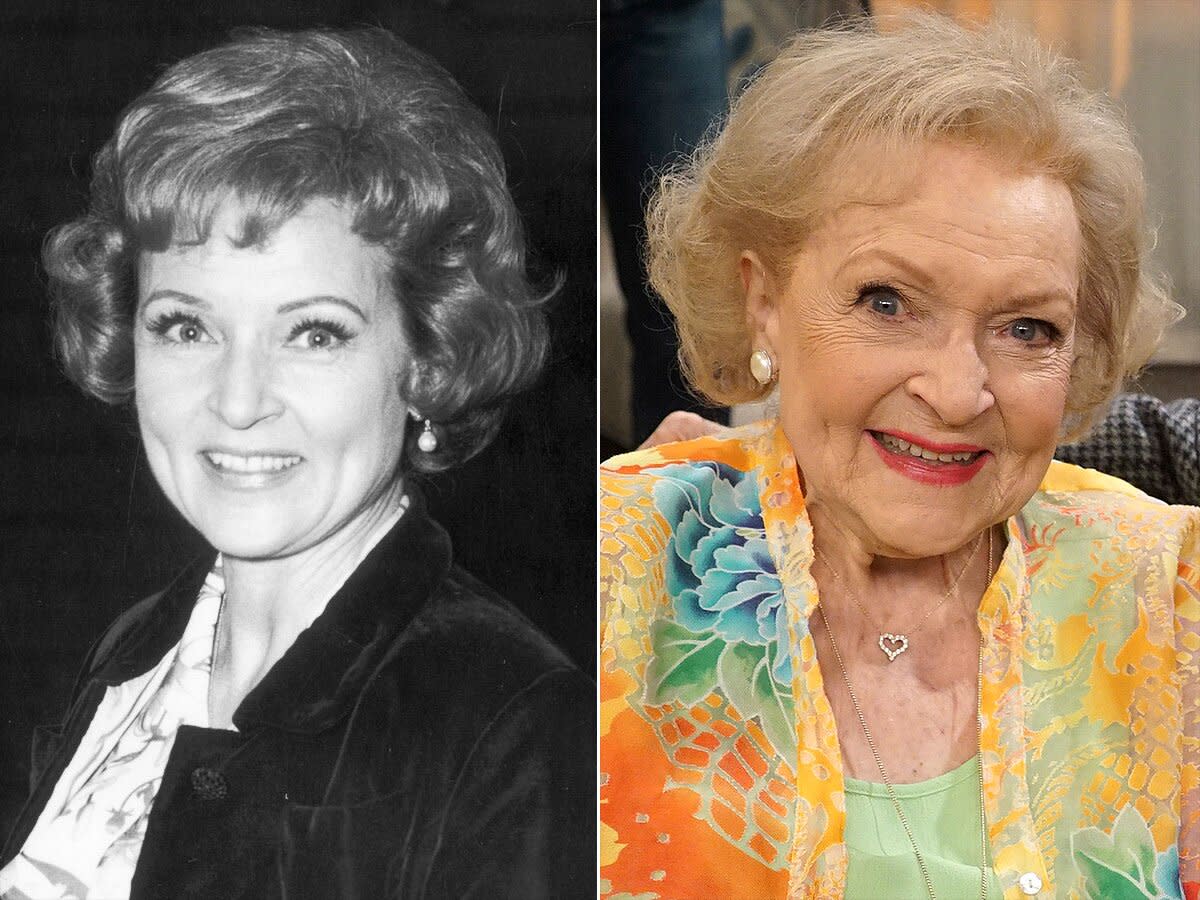 While she was hosting the variety show, White began acting in the television comedy Life with Elizabeth. It became nationally syndicated, making White one of the few women in TV with full creative control in front of and behind the camera.

She earned her second and third Emmy nominations while appearing on The Mary Tyler Moore Show in the 1970s and became the first woman to win a Daytime Emmy Award in the category of outstanding game show host for the NBC show Just Men! in 1983.

In the years immediately afterward, White's work pace only accelerated, culminating with The Golden Girls, on which she played the lovable and light-headed Rose Nyland during the show's run from 1985–92. Rose, from St. Olaf, Minnesota, was the widow of Charlie Nylund. (Originally White was offered the role of sexy Southern belle Blanche, which ultimately went to Rue McClanahan. Bea Arthur and Estelle Getty also starred.) 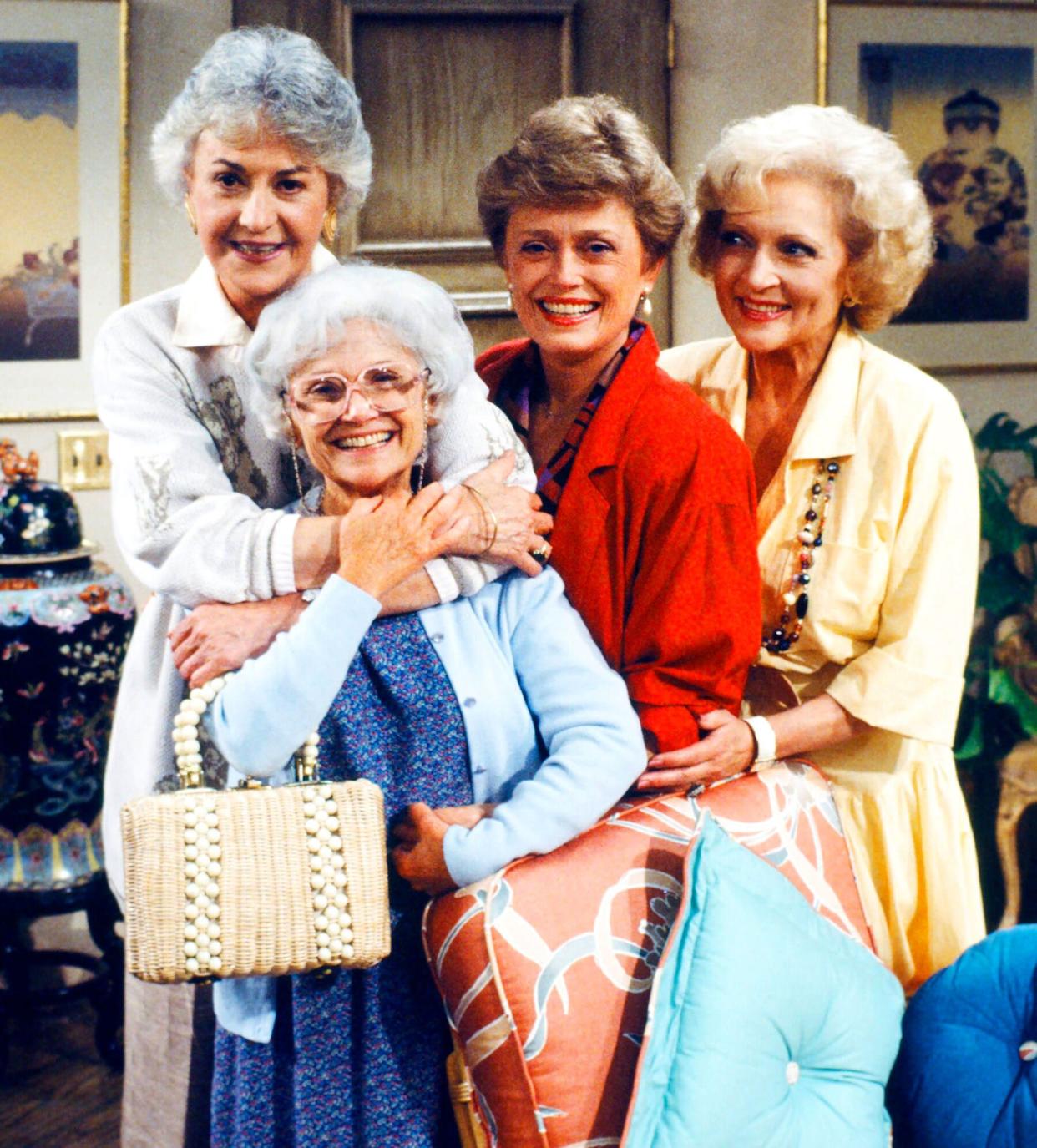 Right before the show went on the air, White confided to The New York Times, "A couple of speeches Rose makes get me by the throat. All I have to do is substitute 'Allen' for 'Charlie,' Rose's husband."

Hot in Cleveland and 21st-Century Stardom

After The Golden Girls ended in 1992, White starred in a series of TV shows such as Bob, The Golden Palace (a spin-off of The Golden Girls minus Arthur)and Maybe This Time with short appearances in new age popular shows like Ally McBeal and That '70s Show, where she played Bea Sigurdson, Kitty's mother.

Shortly after that appearance, she starred in a series of TV movies in the early 2000s before starring as Catherine Piper in Boston Legal from 2005–08 and later as Ann Douglas in The Bold and the Beautiful from 2006–09. 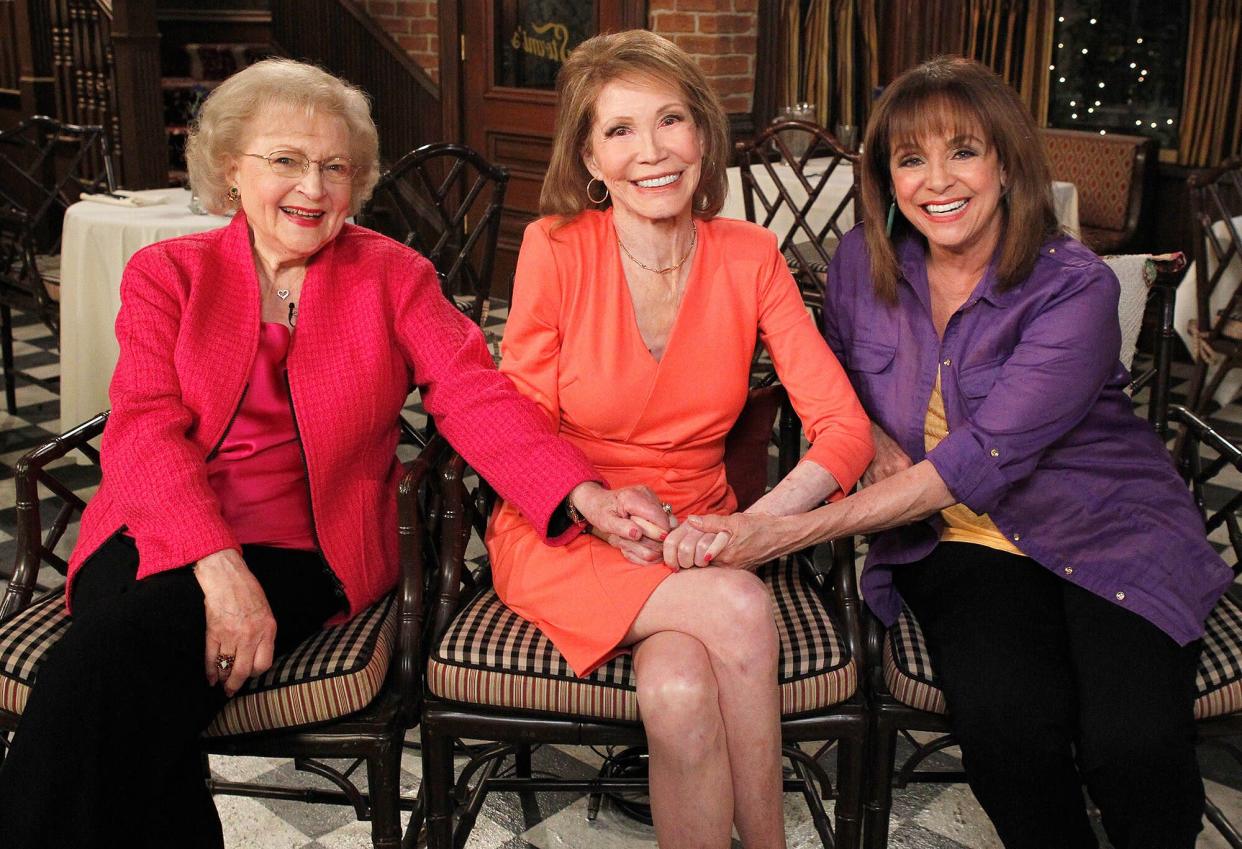 White kept working in television, starring in TV films and shows. She took on the role of Elka Ostrovsky in Hot in Cleveland, which made her one of the most talked-about actresses again. The show starred Valerie Bertinelli, Jane Leeves and Wendie Malick playing three 40-something best friends from Los Angeles who land in Cleveland after attempting to fly to Paris.

A series regular for the entire duration of the show (2010–15), White played the caretaker of the home the three friends live in. The arrival of the ladies sparked the characters life again and thrust her back into the world of dating at 80 years old. Prior to that, in 2009, White starred in The Proposal alongside Sandra Bullock and Ryan Reynolds.

White was nominated three times for the Screen Actors Guild Award for outstanding performance by a female actor in a comedy series in 2011, 2012 and 2013. She won the first two times. Throughout her long career, she was nominated for 21 Primetime Emmys, with five total wins.

Speaking to PEOPLE in January 2021, White said that "having a sense of humor" is the key to a long and happy life.

"Just looking at the positive side and not dwelling on the downside," she said at the time. "Takes up too much energy being negative. Also having a good agent who keeps me busy all the time."