Bitcoin plunges 14 per cent from record highs amid China blackout

Bitcoin fell by as much as 14 per cent to $51,541 on Sunday amid unconfirmed Twitter speculation that the US Treasury may crack down on money laundering that’s carried out through cryptocurrency.

The selloff meant the cryptocurrency reversed most of the big gains it made over the past week.

Smaller rival Ether, the coin linked to the ethereum blockchain network, dropped 10 per cent to $2,101. 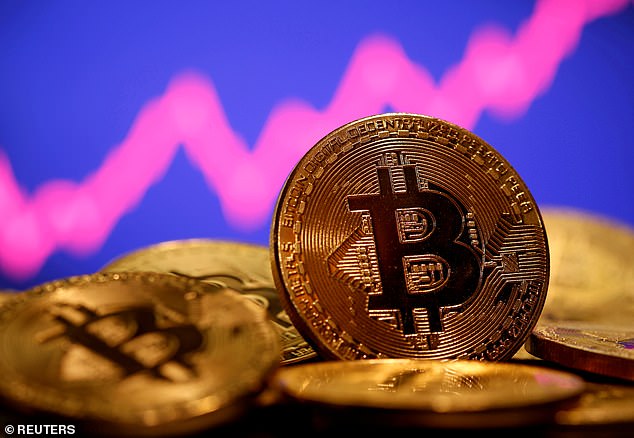 Bitcoin fell by as much as 14 per cent to $51,541 on Sunday morning, reversing most of the gains of a record week that saw it reach highs of above $64,800 on Wednesday

According to Bloomberg, Binance Coin, XRP and Cardano each lost more than 12 per cent, while Dogecoin, which is the token started as a joke, was the only gainer among the 10 largest coins.

Several online reports attributed the slump to rumors that the US Treasury may crack down on money laundering that’s carried out through digital assets.

The U.S. Treasury didn’t comment, and it’s not clear if there’s any veracity to the rumor that some traders were citing.

The tumbling prices came after a record week for cryptocurrency. In the run up to Coinbase Global Inc going public on Wednesday, the value of of all coins surged past $2.25 trillion amid a frenzy of buying.

Founded in 2012, Coinbase became popular among cryptocurrency fans by providing them with an easier way to exchange shares of Bitcoin and other digital currencies.

Unlike many newly public companies Coinbase is profitable, with an estimated net income of between $730 million and $800 million in the first quarter.

Data website CoinMarketCap cited a blackout in China’s Xinjiang region, which reportedly powers a lot of bitcoin mining, as the reason for the selloff. 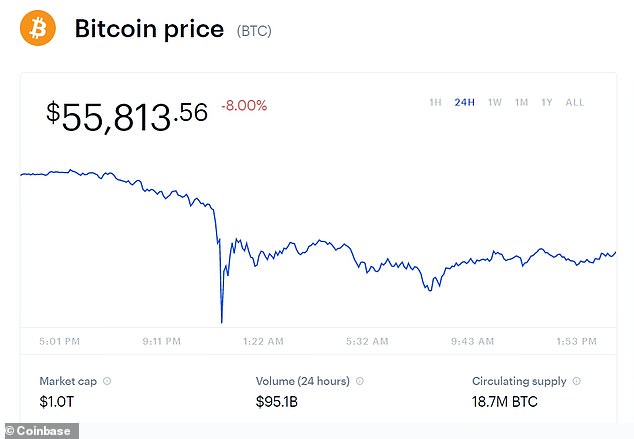 Luke Sully, CEO at digital asset treasury specialist Ledgermatic, said in an email that people ‘may have sold on the news of the power outage in China and not the impact it actually had on the network’.

He added: ‘The power outage does expose a fundamental weakness; that although the Bitcoin network is decentralized the mining of it is not.’

Some widely-followed blockchain analysts on Twitter pointed to a sharp drop in ‘hash rate’ due to the outage.

Hash rate refers to the volatility index that measures the processing capacity of the entire Bitcoin network, and it determines the power required by miners to produce new Bitcoins. 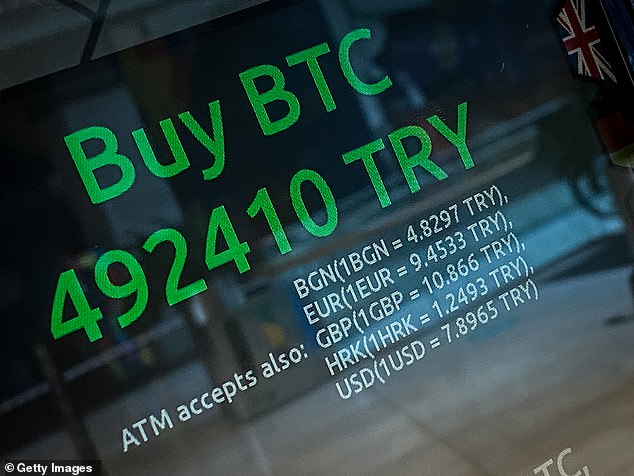 The tumbling prices came after a record week for cryptocurrency. In the run up to Coinbase Global Inc going public on Wednesday, the value of of all coins surged past $2.25 trillion

He added: ‘The recent price drop is well within the bounds of typical volatility, it is noise not signal.’

The retreat in Bitcoin also comes after Turkey’s central bank banned the use of cryptocurrencies for purchases on Friday.

Edward Moya, senior market analyst at OANDA, said cryptocurrencies had been ripe for a pullback.

‘The market has become overly aggressive and bullish on everything,’ said Edward Moya. ‘It could have been any bearish headline that could have triggered this reaction.’

Many cryptocurrency markets operate 24/7, setting the stage for price swings at unpredictable hours. Historically, retail and day traders have driven the moves.

Despite the sudden selloff, bitcoin is still up 89 per cent so far in 2021, driven by its mainstream acceptance as an investment and a means of payment, accompanied by the rush of retail cash into stocks, exchange-traded funds and other risky assets.