Black man screams 'My eyes!' after officers pepper-spray him

Black man screams ‘My eyes!’ after arresting officers pepper-spray him in the face as Black Lives Matter protestors call for anti-police demonstration

Video of the incident in Leeds city centre shows an officer spraying the man, who was sat on a bench, before two colleagues pull him to the ground and handcuff him.

Three other officers then arrive as a crowd gathers around and the man being arrested cries ‘my eyes!’ repeatedly.

Witnesses ask why he is being arrested, with some saying the scenes were ‘outrageous’.

Someone at the scene can be heard saying ‘f***ing b***’ shortly before the officers take the man to the ground.

Police issued a statement after the footage sparked accusations of racism and police brutality. 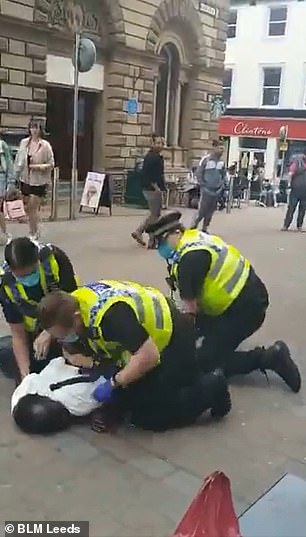 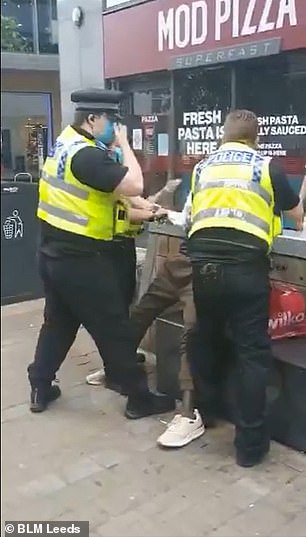 Video of the incident in Leeds city centre shows an officer spraying the man, who was sat on a bench, before two colleagues pull him to the ground and handcuff him

A spokesman for West Yorkshire Police said officers had been forced to take action after the man was seen acting aggressively and was removed twice from Trinity Leeds shopping centre by security staff, Leeds Live reports.

He had started drinking alcohol in breach of the Public Spaces Protection Order on Albion Street and officers were called to the scene at 5.46pm on Monday, it was claimed.

They found him on Albion Street where officers spoke to him for more than eight minutes, trying to establish his identity as a suspect for those offences, the force said.

But he refused to give his details, they added.

His decision to resist arrest sparked the officers’ use of physical force and ‘incapacitant spray’, and the man was then taken into custody on suspicion of being drunk and disorderly in a public place, police said.

West Yorkshire Police said he had admitted guilt and accepted responsibility for his actions, and was given a community resolution, dealing with the offences outside of court proceedings.

He sustained no injuries, and was released this morning.

A referral was made to the police standards organisation for formal review.

They claim the incident is an example of ‘blatant police racism’ and ‘police brutality’.

The group posted the video on Facebook along with a statement saying: ‘United for Black Lives are alarmed to see footage of blatant police racism in Leeds town centre yesterday shortly after 6pm. 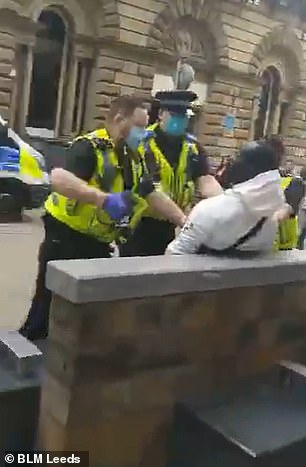 West Yorkshire Police said he had admitted guilt and accepted responsibility for his actions, and was given a community resolution, dealing with the offences outside of court proceedings

‘A lone black man was sat on a bench and was then set upon and confronted by three police officers.

‘The man refused to give his name and details which is his right under the law but one police officer wearing blue gloves, for no apparent reason, continued to put his hands near the man’s face whilst harassing him and touching his upper body in what can only be surmised as attempted provocation.

‘This innocent man did not in any way react to this blatant provocation. It is clear that this man is within his rights not to give the police his details unless they can clearly state why they are interrogating and publicly harassing him.

‘The gloved police officer continues to put his hands in the man’s face and touch his upper body.

‘For no apparent reason the same police officer attempts to grabs the man’s hand and when this is objected to, takes out his pepper spray and sprays the man directly in his eyes.

‘The officer is joined by his two colleagues when they wrestle the man to the ground much to the disapproval of witnesses to this police brutality.’

The group added: ‘Black communities are tired of seeing the police abuse their position by profiling and attacking innocent black people in the street for no good reason. We will not tolerate police racism and brutality.

‘The ridiculous excuse for arrest was stated as ”suspicion of anti-social behaviour.”

‘The only anti-social behaviour was at the hands of the racist police officers that handcuffed this man who was screaming from the pain of his eyes burning from the pepper spray.

‘We demand a public apology from the police in Leeds. We demand that this man is released without charge and compensated for the brutality and humiliation he was subjected to.