Booster jabs will be mandated for certain Victorian workers in critical industries after the state recorded 34,808 new COVID-19 cases and two deaths, while strict conditions will be imposed to allow some staff to keep doing their important jobs, even after learning they’ve been a close contact of a virus carrier.

Monday’s figures came as vaccines were made available to children aged five to 11, and as Victoria urged for a “national approach” to decide if the scheduled return to school later this month should be delayed.

The new daily numbers meant there were at least 161,065 active coronavirus cases in the state, with authorities warning that as many as one in 25 Victorians now had an active infection. Of the new cases, 17,618 were recorded via PCR testing and 17,190 were self-reported from rapid antigen tests.

Victorian Health Minister Martin Foley announced workers in some critical industries would be required to get their COVID-19 booster vaccination from 11:59pm on Wednesday.

Those already eligible for a booster jab would be given until February 12 to receive their third COVID-19 vaccine dose.

Workers not currently eligible would have three months and two weeks from the date of their second-dose deadline to get a third dose.

Mr Foley also announced supermarket and grocery staff; those in abattoirs, food and beverage processing; freight, transport and logistics workers; and food warehousing and storage workers, would be among the critical workers allowed to keep doing their jobs, even if they found they were a close contact of a confirmed case of COVID-19.

Victoria’s Acting Chief Health Officer Ben Cowie said those rules – to kick in from 11.59pm on Wednesday – would only apply to those whose work was “necessary for the continuity of operations and other options have been exhausted”.

He said those who kept working would need to return negative results to daily rapid antigen tests over a five-day period. They would also not be able to enter shared break areas, and must wear face masks – N95 or P2 if they are available – throughout their shift, and both the worker and their employer must consent to them returning to work.

Mr Foley also announced more amendments to Victoria’s coronavirus restrictions that would come into force from 11.59pm on Wednesday. Among the changes were new rules for visitors to hospitals and aged care facilities and the closure of dance floors at most indoor hospitality venues.

“Those [hospitality] venues can still operate and there are no changes to density settings currently in place,” Mr Foley said.

The Health Minister said while weddings were excluded from the rule, authorities encouraged wedding hosts and guests to put their dance floors outdoors.

Residents at aged care facilities would still be allowed up to five visitors a day, as long as their guests returned a negative rapid antigen test result before their arrival. However, if test results could not be provided, the number of daily guests to each resident would be reduced to two.

Victorians planning to visit a hospital from Thursday would need to prove they had two doses of a COVID-19 vaccine. Those unable to provide that evidence would be required to return a negative rapid antigen test before they enter, and wear a mask to N95 or P2 standard or equivalent. 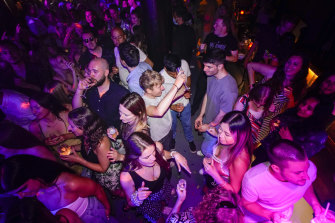 Hospitality venues won’t be able to operate indoor dance floors, unless for a wedding, under the restrictions announced Monday.Credit:AP

Victorian Healthcare Association chief executive Tom Symondson welcomed the decision to bolster visiting restrictions, saying hospitals had been using rapid tests to screen visitors for COVID-19, but many had run out of supplies.

He said unvaccinated people were more likely to catch and transmit COVID-19 and the policy would reduce the risk to healthcare workers and vulnerable patients, including pregnant women, newborns and those receiving cancer treatment.

Victoria’s state schools are set to resume classes on Monday, January 31, but Mr Foley said the state was looking for a national approach to decide if the start of term should be delayed to allow more children to get vaccinated.

He said national cabinet last week agreed “the issue of a consistent approach to the return to school is very important”.

“I understand that the Commonwealth this week [is] commencing the discussions to try to get a consistent approach to those issues, and Victoria will be a part of those discussions,” Mr Foley said.

“We’ve all done it really hard, but kids in particular haven’t been able to get vaccinated – they’ve missed a lot of school to protect the rest of the community.

“We want to make sure that their sacrifice – their effort – is recognised and that we get them back to school as quickly as possible and … that we do so safely, and we will be active participants in that national approach.”

Professor Cowie said between late November through to early December, COVID-19 cases in five to 11-year-olds accounted for more than 30 per cent of Victoria’s total infections, but that figure had now dropped to 4 per cent.

“With schools having closed and kids not attending school, that proportion … has dropped quite drastically, suggesting whether it’s within the school or associated with school, there are significant amounts of transmission that occurs.”

Meanwhile, Victorian Premier Daniel Andrews, who returned to work on Monday after taking leave, said schools had been one of the issues he had been discussing with NSW Premier Dominic Perrottet as he published a screenshot of the pair talking over Zoom to his social media account.

Mr Foley said almost 9000 of the self-reported COVID-19 cases recorded in Victoria on Monday reportedly came from rapid antigen tests taken on Sunday. The Health Department later said another 3000 were from tests done on January 8 and the remainder came from swabs taken over the prior five days.

The two people whose deaths from COVID were reported on Friday were both in their 70s. The deaths take the total number of COVID-related fatalities in Victoria since the pandemic began to 1580.

The number of people in hospital with the virus has grown to 818, and there are 118 people in intensive care. Twenty-eight are on a ventilator.

NSW reported 20,293 new coronavirus cases and 18 deaths – the most daily deaths in the state since the pandemic began.

Victoria’s COVID-19 vaccination program expanded on Monday to include children aged between five and 11, with paediatric Pfizer jabs available at state-run clinics, along with general practice clinics and pharmacies.

While state-run hubs were reportedly ready to go ahead with the five-to-11-year-old rollout on Sunday, peak medical bodies complained doctors and pharmacists were forced to delay or even cancel coronavirus vaccine appointments.

“We’re going to have to cancel, as are a lot of other clinics [for] kids today,” she told 3AW on Monday morning.

“We’ve got hundreds [of people booked in to receive a COVID-19 vaccine] this week. We ordered our vaccines on [December 12], they were promised to arrive the week of [January] the 7th.”

A spokesperson for the Pharmacy Guild of Australia said Victorian pharmacies were in “much the same position as GPs”.

Federal COVID-19 task force commander Lieutenant-General John Frewen said on Monday authorities would have “more than enough vaccines for every kid to have their first dose before the end of the year”.

He said reports of people struggling to find paediatric vaccine appointments across the country did not “stack up with preparations in place”.

“If there have been circumstances of people having trouble finding a booking I’m not going to contest that, but for every one of these anecdotal stories there are many thousands of positive stories,” General Frewen told Radio National’s breakfast program.

The proportion of Victoria’s population aged over 12 who have received two doses of a COVID-19 vaccine stands at 93 per cent, after another 12,506 people were jabbed at a state-run clinic on Sunday. A total of 17 per cent aged over 18 have received a booster dose.