London: Boris Johnson has narrowly survived his first serious rebellion by Tory MPs in the Commons over his controversial decision to allow Chinese company Huawei to build Britain's 5G networks.

The January decision angered the United States and caused serious tensions amongst the Five Eyes intelligence-sharing club comprising Australia, the UK, US, New Zealand and Canada.

A total 36 Tory MPs combined with non-government parties to vote against the government on an amendment to an unrelated telecommunications bill put forward by the leader of the rebels, former Conservative leader Iain Duncan Smith.

Sixty Tory MPs did not vote for the government meaning the rebels need just 13 more votes in any future divisions. 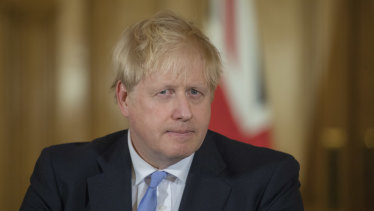 Johnson has a working majority of 87 following his landslide win in December last year but the result of Tuesday's vote in the Commons was 306 – 282.

While the government ultimately prevailed, the rebel's result was stronger than expected. Many more MPs are understood to agree with the rebels but not their tactic of pushing it to a vote on an unrelated bill.

"This shows the huge strength of feeling among the Conservative party that the government needs to get Huawei out of our essential infrastructure," the former deputy prime minister Damian Green told The Sydney Morning Herald and The Age immediately after the vote.

"We will obviously be returning to this when the Telecommunications Security Bill is introduced and the government would be well advised to think hard," Mr Green said.

Conservative MP Tim Loughton said he voted against the government for the first time over the issue. He said the UK should "heed the warnings" of it's "closest allies"

"In what other aspects of sensitive infrastructure planning would a respectable government opt for a bargain-basement offer from a dodgy supplier which goes against all the rules of anti-competitive procurement," Loughton said.

"This decision stinks and the Government needs to think again."

Mike Rake, an advisor to Huawei, earlier warned Johnson in an open letter that any attempt to "further restrict Huawei 5G equipment, or to remove existing 4G equipment will not only incur very significant costs, but prejudice trade relationships with China and will significantly set back the Government's broadband ambitions."

Duncan Smith had not expected to bring on a vote and had urged the Culture Secretary Oliver Dowden to provide a "lock-tight" commitment to phase out the Chinese vendor from British networks entirely.

The rebels want Huawei equipment out by 2023 but Duncan Smith told Mr Dowden he was "flexible" on the timeframe.

But Mr Dowden did not give any assurances and rowed back on a commitment given by his junior minister Matt Warman during a debate last week, that the government was committed to a phase-out of Chinese kit, over spying fears.

That prompted Duncan Smith to move his amendment signed by 26 MPs.

Tory backbencher Bob Seely, one of the first government critics of the UK's decision to approve the Chinese vendor, said he was "surprised" by the significant cut in the Government's majority "considering the Bill was not even the right vehicle."

"It was a strong showing," he said.

The Tory co-chair of the All-Party Parliamentary Group for Australia and New Zealand Andrew Rosindell joined the rebellion during the vote.

"I don’t want to risk the UK’s communications and security," Rosindell told The Sydney Morning Herald and The Age.

"We should work with our friends and allies to develop alternatives for 5G. Rebelling against my own government that I support is not what I want to do, but this is one of those occasions when a point has to be made."

Dowden promised MPs that the government would bring the actual bill to the Commons before the summer recess begins on July 21 when they can debate and vote again on the bill then.