Boris Johnson is expected to push the German chancellor to end his country and the wider EU’s ’embarrassing’ continued use of Russian oil and gas as they meet in London for the first time.

Ahead of Olaf Scholz’s visit to Downing Street it was revealed yesterday that the bloc has paid Vladimir Putin’s genocidal regime 35billion euros for energy since he invaded Ukraine.

The two leaders will meet in Downing Street to discuss how to help European countries wean themselves off Moscow’s teat amid growing evidence of Moscow forces committing horrific war crimes.

The mass killing of civilians in Bucha, near Kyiv, have been widely condemned by the West as war crimes with piles of bodies showing signs of torture and execution pictured after it had been recaptured by Ukrainian forces.

But officials have now revealed that even greater damage was done by Putin’s thugs in Borodyanka, northwest of Kyiv and about 15 miles from Bucha.

The are ‘significantly more dreadful’ than the scenes in Bucha, with residents left to die in the rubble of their bombed homes for a week, president Volodymyr Zelensky said last night. 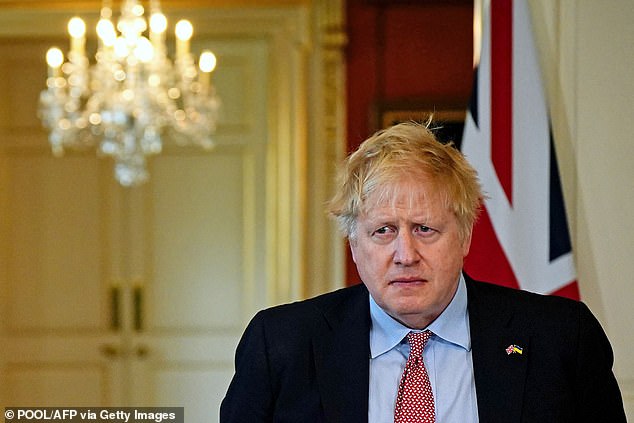 The two leaders will meet in Downing Street to discuss how to help European countries wean themselves off Moscow’s teat amid growing evidence of Moscow forces committing horrific war crimes. 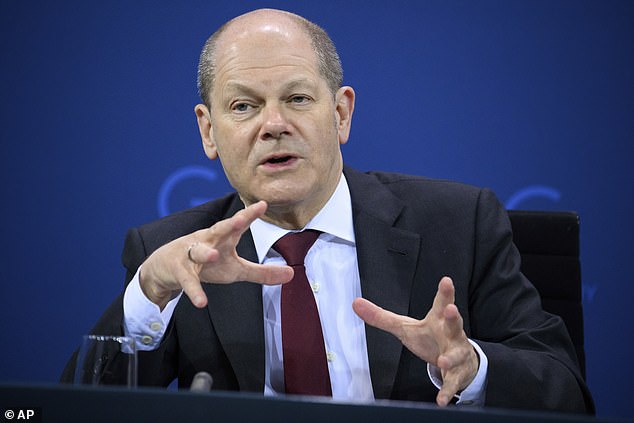 Ahead of Olaf Scholz’s visit to Downing Street it was revealed yesterday that the bloc has paid Vladimir Putin’s genocidal regime 35billion euros for energy since he invaded Ukraine. 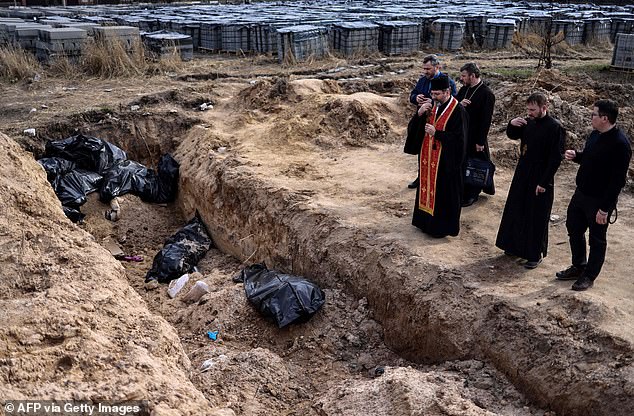 Priests pray at body bags in a mass grave in the garden surrounding the St Andrew church in Bucha, which was the scene of bloody war crimes

Mr Johnson believes the situation is ’embarrassing’ and wants a ‘fossil fuel embargo’, a source told the Times. He  is expected to offer assistance to Berlin, which is still heavily reliant on Russian gas, to reduce its dependence on Moscow’s energy exports in a bid to starve Vladimir Putin’s war machine of funds.

European Union countries on Thursday approved new punishing sanctions against Russia, including an EU embargo on coal imports, in the wake of evidence of torture and killings emerging from war zones outside Kyiv.

So far, banning natural gas has remained out of reach, but not because of lack of support from the European parliament.

The legislature approved a resolution by a 513-22 margin – with 19 abstentions – demanding ‘an immediate full embargo on Russian imports of oil, coal, nuclear fuel and gas.’

Even if the move underscores the EU’s determination to act against the Kremlin, it carried little more than moral weight, since it is up to the member states themselves to unanimously impose such bans.

And energy is key in Europe’s trade relations with Russia. EU foreign affairs chief Josep Borrell has said that the 27-nation bloc is paying a billion euros a day for energy provisions, accounting for over 35 billion euros since the war started.

The UK has pledged to end all imports of Russian coal and oil by the end of 2022, with gas to follow as soon as possible.

Ukrainian foreign minister Dmytro Kuleba has pushed for foreign leaders to go further on cutting ties with the Kremlin.

‘As long as the West continues buying Russian gas and oil it is supporting Ukraine with one hand while supporting the Russian war machine with another hand,’ he said in Brussels.

He took particular umbrage with Germany, urging it to cut red tape and speed up support to Ukraine.

Germany has faced criticism from Ukraine and other European nations, including Poland, with claims it has been too slow to phase out Russian energy.

Robert Habeck, the German economy and energy minister, has announced plans to stop importing oil and coal from Russia this year, and gas by mid-2024.

Meanwhile, UK and Nato allies have agreed to supply ‘new and heavier’ weapons to Ukraine in an acknowledgement that the conflict has entered a ‘new and different phase’.

After withdrawing from Kyiv, Mr Putin’s troops look to have regrouped as they eye gains in the Donbas region in eastern Ukraine.

Mr Kuleba has urged the West to hand over the weapons swiftly or else Ukraine risks losing territory to the invading forces.

‘Either you help us now, and I’m speaking about days, not weeks, or your help will come too late,’ he warned.

Speaking to Sky News, Mr Peskov denied Russian forces were behind the deaths of Ukrainian civilians in places such as Bucha, which is situated on the outskirts of the capital, instead calling the photos a ‘bold fake’.