As the owner of a bouncy castle business, Michael Andrew never expected a Molotov cocktail to enter his world. 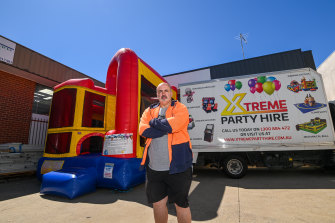 Andrew Saliba’s party hire business was targeted in arson attacks in the summer of 2016-17.Credit:Justin McManus

Another party hire business owner, Andrew Saliba, is used to cheerful greetings when he starts inflating amusements or unloads jukeboxes and arcade machines.

“We rock up to people’s places, corporate events or schools, or whatever, and people are happy to see us because we have the fun stuff,” he said.

“We deal with happy people. We’re not used to dealing with threats and fire bombings.”

The owners of Melbourne’s jumping castle and party hire businesses endured a terrifying summer in 2016-17, as a two-month spree of arson attacks caused financial damage, fear and stress, contradictory to their fun-focused industry. Their shock was magnified when they learned the man who organised the campaign was rival business owner James Balcombe. 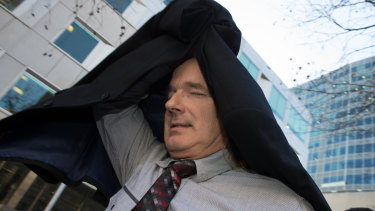 James Balcombe outside the County Court in 2017.Credit:Jason South

Hellbent on getting the jump on his rivals, Balcombe claimed his competitors copied his business ideas and were offering cheaper rates.

He enlisted a former employee and that man’s school mate, and offered them $2000 for every competitor they firebombed. Both men were easily swayed; one was a petty criminal with a drug addiction and the other had mounting vet bills for his beloved dog.

Between December 2016 and February 2017 there were almost a dozen arson attacks carried out on five businesses. One owner suspects Balcombe’s hit-list was based on a Google search of Melbourne’s leading party hire companies.

By pleading guilty this week to 11 counts of conspiracy to commit arson, Balcombe admitted he had his underlings attack warehouses in Werribee, Tullamarine, Hallam, Keysborough, Hoppers Crossing and Warragul. Balcombe didn’t start any fires himself. 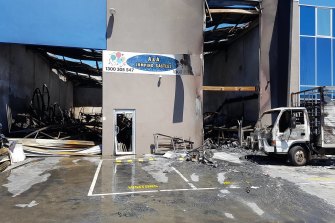 The aftermath of the fire at A&A Jumping Castles, in Hoppers Crossing, in January 2017.

The arsonists recruited a third man for the early attacks. But when two of the trio pulled out, the drug addict continued throwing Molotov cocktails over fences and through windows. The Court of Appeal later labelled him an “arsonist for hire”.

Most attacks caused either little or no damage, but one at A&A Jumping Castles destroyed at least $1.2 million of property including the warehouse, a van, jumping castles, a mechanical bull, stretch limo, merry-go-round and go-karts. 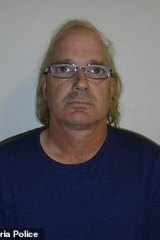 “It killed us,” said Mr Andrew, who with wife Aline now runs A&A at a fraction of the size their award-winning venture once was.

They said it was only the donations of equipment from other businesses that allowed them to get back on their feet.

“One minute you’ve got everything and in five minutes you’ve got nothing,” Mr Andrew said.

After seeing that fire on the news, Balcombe was elated with his firebomber. “That’s the best job you have done so far,” he told him, urging more destruction.

The Andrews’ never met Balcombe, so were shocked to learn the man behind the crime was a fellow business owner.

But Mr Saliba, who owns Xtreme Party Hire with wife Samantha, was less surprised. He said he received threatening and aggressive emails from Balcombe well before the arson campaign, accusing him of copying ideas and notable for their air of one-upmanship.

The Salibas’ warehouses were targeted four times in fires that caused a combined $40,000 damage. They recall scary, exhausting weeks of fixing metal sheets over windows, and even remember watching on their CCTV feed from home one night as the arsonists approached their warehouse.

“[In this industry] We all work together, we don’t go around [fire] bombing each other just to get business,” Mr Saliba said.

“At the end of the day I think it was just greed. It’s sad in a way, we could have helped each other and worked together. But he [Balcombe] went rogue.”

“I think it was just greed. It’s sad in a way, we could have helped each other and worked together. But he [Balcombe] went rogue.”

The arson campaign ended with a blaze at Balcombe’s Kangaroo Ground property after he instructed his firestarter how to torch his Awesome Party Hire storage shed. Balcombe’s aim was to divert suspicion away from, and he told police the damage bill would be $1.2 million. Later, he was accused of trying to fraudulently claim an insurance pay-out.

The conspiracy deflated over following weeks. The three associates, whom The Age has not named for legal reasons, pleaded guilty and were later jailed in the County Court.

The main arsonist was jailed for almost 12 years, but that term was cut on appeal to 8½ years (5½ years non-parole).

As Balcombe held firm, the case against him included allegations he trolled a competitor’s website and waged a cyber attack against another business, where police traced a hacker to an IP address in Qatar.

In 2018, while on bail awaiting trial, Balcombe absconded. He spent more than a year at large until his arrest in the Perth suburb of Dianella last year, by which time he was operating another jumping castle business under an alias, and federal police nabbed him over a fake postal stamp scam.

Convicted and fined by a Perth magistrate for that offence, he was extradited to Victoria and hit with a short jail term for using a fake doctor’s letter to excuse him from a previous court appearance.

Now 57, he is in custody. This week after months of negotiations between his lawyers and prosecutors, he pleaded guilty. His victims hope a plea hearing next year will bring closure.

“I’ve always kept a fire extinguisher in my bedroom because he knew where we lived,” Andrew Saliba said.

“It’s good to see that it is hopefully going to end.”