This is the adorable moment an protective boxer dog acted as a bodyguard to his pregnant owner, refusing to let the father-to-be anywhere near his son.

The dedicated dog refuses to let the father-to-be rub his partner’s stomach, playing the role of bodyguard as he leaps in front of his owner.

Expectant mother Jessica is due to give birth to a baby boy called Maverick on November 16, 2020.

In the adorable video from September 27, the faithful hound cries out and barks every time the father-to-be tries to touch Jessica’s stomach. 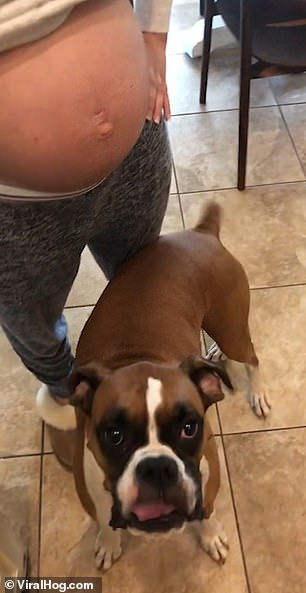 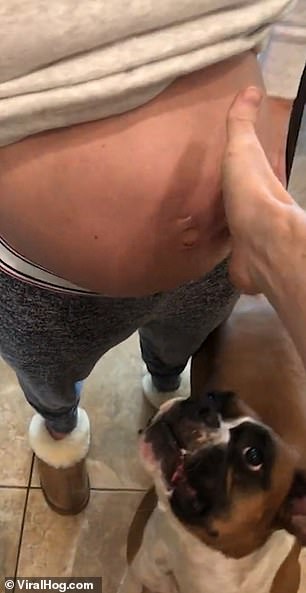 The man is heard saying: ‘I am going to say hi to Maverick, OK?’

But Maddox continues to protect his owner, even licking and snapping at the man’s hand to make sure his little brother does not come into harm’s way.

The dog, who continues to energetically wag his tail, barks and leaps into the air in an attempt to stop the man’s hand from reaching Jessica’s belly.

Her partner replies: ‘That’s my baby!’

Jessica puts her hand on her stomach as the battle between her partner and her dog continues, with Maddox refusing to back down from his self-appointed job as a bodyguard.

The adorable video has brought a smile to social media users’s faces, who have watched the video since it was shared on YouTube. 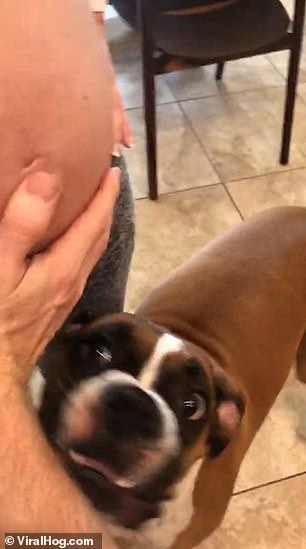 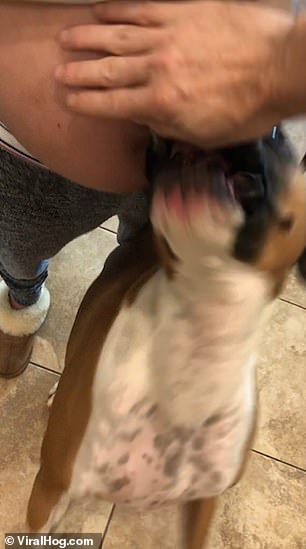 In the video, Maddox acts as a bodyguard as he barks and leaps up as the father-to-be tries to rub Jessica’s stomach. The expectant mother is due on November 16

One person commented: ‘This just bring a smile to my face! Such an adorable Boxer!’

Speaking about the footage, the father-to-be explained: ‘In this video, we have our boxer named Maddox who is protective over his soon to be new baby brother. The mother named Jessica is due November 16, 2020.’

The boxer breed in general are extremely protective of their owners and can make good guard dogs and police dogs due to their faithful nature.

But the loyal breed are also excellent family dogs as they have playful and goofy personalities.

Boxer dogs can make the perfect playmate for young children as they are generally gentle dogs and enjoy playing outdoors, according to website Canna-Pet.