Boy, two, survives after his father tried to murder family in Ukraine

Boy, two, spends two days next to the bodies of his parents after escaping from noose when father axed the child’s mother to death then tried to hang himself and his son in Ukraine

A two-year-old boy was found next to the dead bodies of his parents two days after his father killed his mother with an axe in Ukraine.

Car mechanic Andriy Demyanchuk, 33, attacked his family in their rented flat in the city of Zaporizhia in southern Ukraine’s Zaporizhia Oblast region.

The jealous man went berserk during a quarrel with his wife Olena Demyanchuk, 26, who he suspected of having an affair, reports say.

He grabbed an axe and butchered her to death in front of their two-year-old son, according to police. 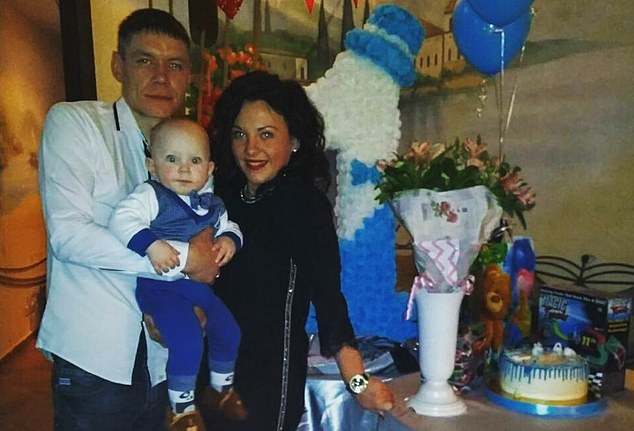 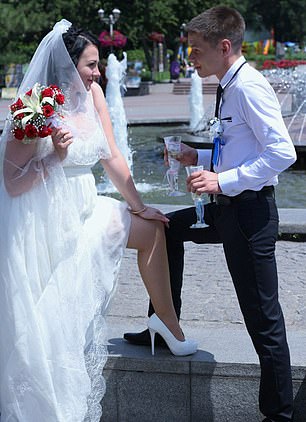 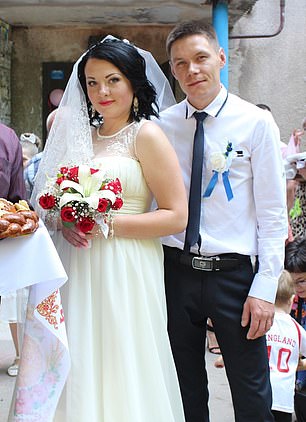 Andriy and Olena pictured on their wedding day. He reportedly suspected of having an affair

Demyanchuk then made two nooses going to hang himself and his little son from the ceiling simultaneously.

He put the nooses on their necks while standing on a chair and holding the child in his arms.

After that, the father pushed the chair away with his leg.

Luckily for the boy his noose was large enough for him to slip out of it and escape death as his father died, cops said.

Next two days the toddler spent in the flat with his dead parents.

The child was so terrified that he could not cry while sitting near the corpses, neighbours said.

The boy was found after his relatives, who could not reach the family by the phone, alarmed the police.

A witness said to local media: ‘When officers broke into the flat, they saw the mother lying on the floor and the father hanging from the ceilling.

‘The terrified child was sitting near his dead parents and nibbling on a piece of bread.’

The boy was rushed to hospital in a state of shock. He is receiving all necessary medical care now.

Local authorities spokeswoman Natalia Syvorashka said: ‘The child is in a state of shock. He received a severe psychological trauma. He is scared. Police launched a criminal case on murder and suicide. The parents’ bodies were taken for further forensic examinations.

According to police, lately the spouses had financial problems and their relationships were tense.

The situation was aggravated by the fact that the husband was jealous of his wife.

He constantly accused her of infidelity and they quarreled because of that, neighbours said.

Doctors say the toddler’s life is not in danger but he will need a professional therapy and counselling to recover his mental wellness.

The boy’s grandmother is in the hospital with him. She is expected to get custody of the child.