A Ukrainian volunteer ‘deserves a medal’ for using his body to shield an injured woman from danger.

At least five people were killed and a dozen injured in Kharkiv on Sunday when shells rained down across the city.

Denys Petrenko, a volunteer with the Red Cross in Ukraine, had been attending to a woman who had been hit by shrapnel.

But Russian rockets soon rocked the city once more, and paramedics, soldiers and volunteers were all seen on camera running into a nearby building for cover.

But brave Denys refused to leave the injured woman, and used his body to shield her from the assault.

At points, he can be seen in the footage speaking to her and offering words of reassurance.

After the video was uploaded, Denys was hailed a hero and the Red Cross urged to issue him with a medal.

But not everyone was as complimentary.

Denys told the Sun: ‘My mum was really not happy. 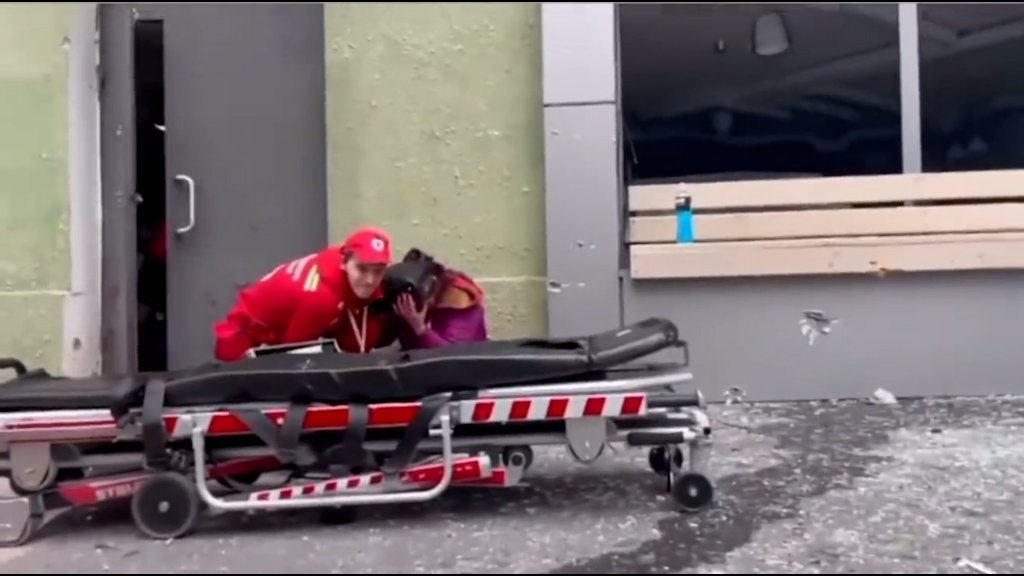 ‘Everyone saw the video and they called her when she was in church.

‘At first she didn’t understand what they were on about.

‘Then she watched it. She said, “Are you crazy! Don’t you care about my nerves”.’

The injured woman survived the shelling and was safely taken out of harm’s way on a stretcher.

Denys had been in Kharkiv with a Red Cross colleague to deliver food and medicine.

Their van had been flagged down by those on the ground as they passed.

Denys said it was ‘just a reflex’ to protect the injured woman.

He told the Sun: ‘According to our protocols I should have hid when the rockets started. I was trying to bandage her wounds.

‘It was a reflex. I was not thinking about it. I just want to help people.’

The video of Denys the ‘hero’ was shared widely on social media.

One Facebook commenter wrote: ‘It’s a pride to be able to wear the same emblem as you, Denys. The whole world of the Red Cross is proud of you.’

Another added: ‘Glory to the Hero!’

Beneath the video, his proud mother commented thanking everyone for their support.

Halyna Petrenko wrote: ‘I read all the comments, thank you all for your kind words to my son, he did everything right, he is a volunteer, but he is also a medic by education, and also a person with a good heart (although a mother’s heart was beating from such a video).

‘But you also have to thank everyone in the video, they also do their job on a daily basis with no hesitation in their lives. You are all heroes to us!’

Kharkiv has been under Russian bombardment since the early days of the war, and has been subjected to some of the harshest Russian shelling attacks.

According to the city’s mayor, Ihor Terekhov, more than 1,900 high-rise buildings have been destroyed.