Brazil’s Bolsonaro, stabbed in 2018, is hospitalised with chronic hiccups

Brasilia: Brazilian President Jair Bolsonaro has been hospitalised to identify the cause of chronic hiccups, the President’s office said, in the latest health scare for the far-right leader who was stabbed in the gut on the campaign trail in 2018.

Bolsonaro, 66, went to the military hospital in Brasilia and is expected to be under observation for 24 to 48 hours, although not necessarily in hospital, the statement said. 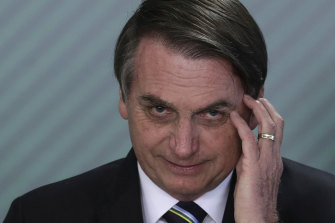 Jair Bolsonaro had been feeling abdominal pains during the early hours of Wednesday, local media reported.Credit:AP

“He is feeling good and doing well,” it said.

Local media outlet G1 reported that Bolsonaro had been admitted for unspecified medical testing after feeling abdominal pains during the early hours of Wednesday.

In a national address on social media last Thursday, Bolsonaro struggled to express himself at one point, and said he had been suffering from hiccups for a week.

Bolsonaro’s health has been an issue during his presidency. He nearly died after being stabbed in the intestines on the campaign trail in 2018, resulting in multiple follow-up surgeries. Pro-Bolsonaro federal lawmaker Bia Kicis wrote on Twitter on Wednesday that Bolsonaro’s hospitalisation was “a consequence of the 2018 knifing”.

Newspaper O Globo reported that Antonio Luiz Macedo, the surgeon who operated on Bolsonaro in 2018, had been called to Brasilia to be with the President.

Aside from the knifing, Bolsonaro caught COVID-19 in July last year, but recovered. In appearances over the last few months, he has also had a stubborn cough.