China appears to have stripped millions of Hong Kongers of legal protections by declaring it will no longer recognise dual British nationality.

The UK Foreign Office warned Monday that citizens who enter Hong Kong on a British passport ‘may be treated as a Chinese citizen by local authorities’ and may not be entitled to consular assistance if they are arrested.

It comes amid a crackdown on pro-democracy dissenters by Beijing which has seen critics rounded up, amid fears they could be sent to mainland China for trial.

It also appears to defy the Joint Declaration which governed the 1997 transfer of power from Britain to China, which says foreign travel documents will be recognised. 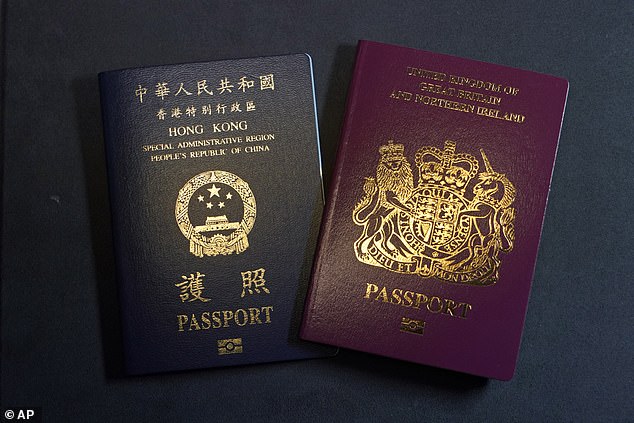 Beijing has long refused to recognise dual nationality of its own citizens, forcing them to renounce citizenship of China in order to acquire a foreign passport.

The same law also technically applied in Hong Kong, though until now diplomats had routinely been given access to dual nationals in detention.

Warnings by the Foreign Office issued on Monday raised fears among diplomats that this would not be the case in future.

It comes amid a spat between the UK and Beijing over the status of overseas citizen passport holders.

In July last year, the UK said it would grant a path to full citizenship to any of the passport holders after China extended its authority over Hong Kong using a draconian security bill which has since been used to stifle free speech and protest.

It is thought that 5.4million Hong Kongers qualify for British overseas citizen passports, and there are around 400,000 currently in use.

The US and Canada have also protested in recent weeks that dual nationals are being required to choose between their Chinese and foreign nationalities.

‘We have deep concerns that this new Hong Kong policy will compel people to declare their citizenship under duress and without an opportunity to understand the full implications of the declaration, and is ripe for abuse by law enforcement,’ the US State Department said.

Hong Kong was officially recognised as an independent territory of China after Britain handed over control in 1997, with additional freedoms granted to citizens over and above those on the mainland.

But China has been slowly exerting more control over the territory in recent years, facing off against sometimes violent protesters in the process.

Last year, in a major power-grab, it passed security laws which extend its legal jurisdiction over Hong Kong and allow possible life sentences for those accused of undermining Chinese authorities, among other things.

Critics said the laws would be used to stifle free speech and foreshadowed a wider assault on public freedoms, calling it ‘the end of Hong Kong’.

Since then a number of people have been charged under the law including newspaper owner Jimmy Lai, owner of Apple Daily which is a fierce critic of Beijing.

Lai, who is currently languishing in jail after being repeatedly denied bail, is charged with collusion with foreign forces.