Britain's cheapest seaside Airbnbs are available for just £10 a night

Britain’s CHEAPEST seaside Airbnbs: A £16-a-night Sussex tent, £10 bedroom in Wales and a £15 Blackpool beach room – the most affordable stays across the UK for holidaymakers this summer

With the cost-of-living crisis now biting deep into disposable incomes across the country, many Britons will be reconsidering whether they can afford to go on a holiday over the coming months.

But those willing to compromise on space might be interested to know it’s still possible to have a seaside break for peanuts – when looking at these properties which are the cheapest available on Airbnb.

There are at least 20 listings for £25 or less on the website under the ‘beachfront’ category, with the cheapest in the UK being a private room on the North Wales coast at Rhyl which is only £10 a night.

Despite looking very basic as you might expect, the room in an Edwardian building is described as being ‘on a pleasant street adjacent to the sea and beach promenade’ and even has an average rating of 4.8 stars.

Other very cheap options include a touring caravan around 50 miles away at Harlech for just £13 a night, while you can also get a private room near Blackpool beach for £15 a night which has an average star rating of 4.58.

If you are willing to really compromise on space then you could look at a £16-a-night ‘cosy’ listing on the East Sussex coast at Peacehaven which is simply described as a ‘private tent with airbed and sleeping bag’.

Other properties within the cheapest 20 are located at Sheerness in Kent, Walney Island in Cumbria and on the Isle of Man and Isles of Scilly. Here, take a look at each one – starting with Britain’s cheapest seaside Airbnb: 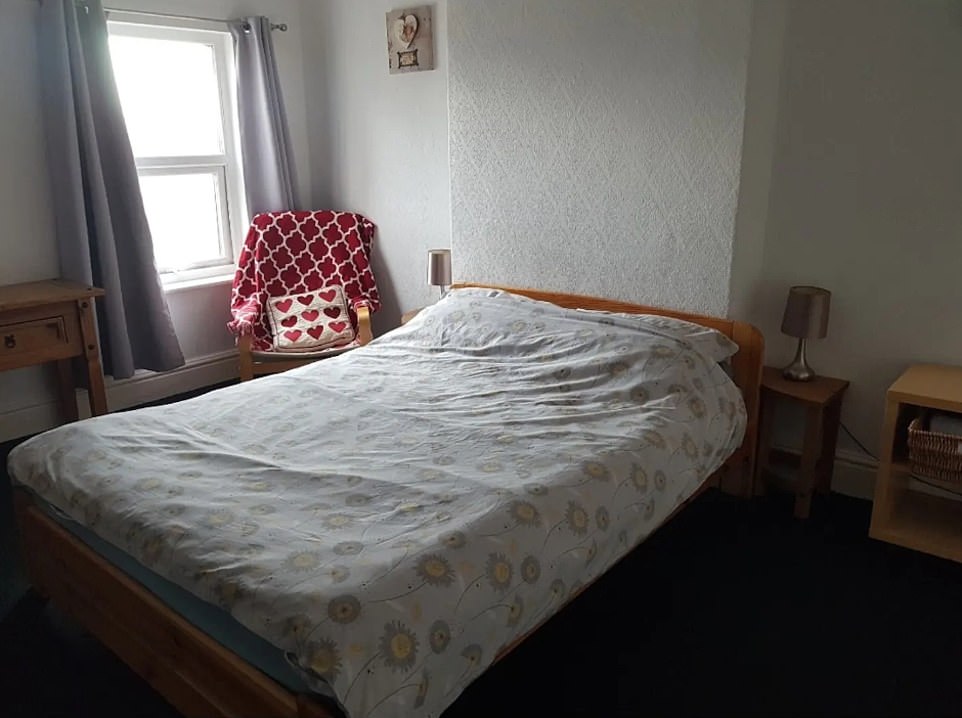 £10/night – RHYL, NORTH WALES: The cheapest seaside Airbnb in Britain – under the category ‘beachfront properties’ – is this private room in an Edwardian building in the Welsh resort of Rhyl. It is described as being ‘on a pleasant street adjacent to the sea and beach promenade’ and ‘ideal for hospital staff, workers and travellers’, and has an average rating of 4.8 stars 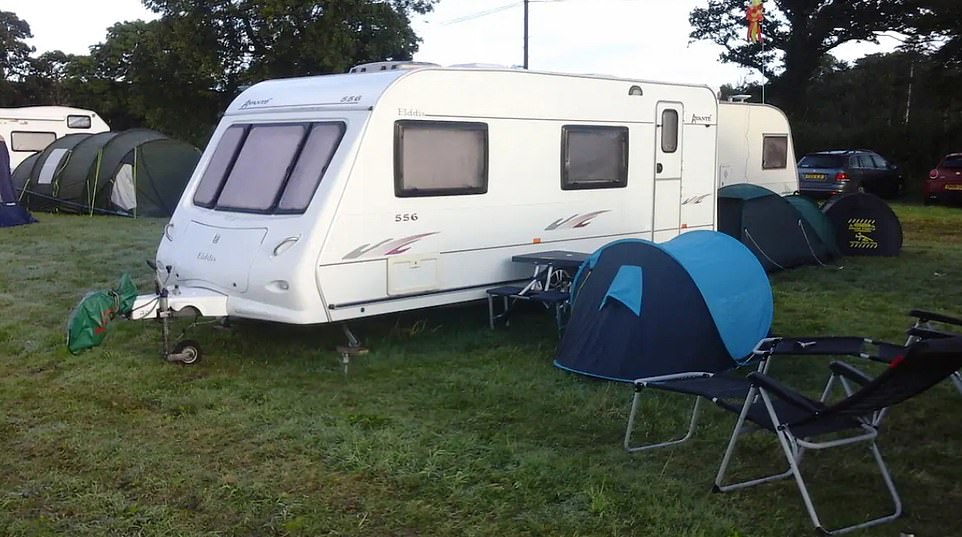 £13/night – HARLECH, NORTH WALES: Another cheap location for a coastal getaway is this touring caravan based on the Welsh coast at Harlech – known for its castle – which is available for just £13 a night. The description also says: ‘The touring caravan can be delivered and set up for your holiday anywhere in Wales   we can even change location mid-week if you wish’ 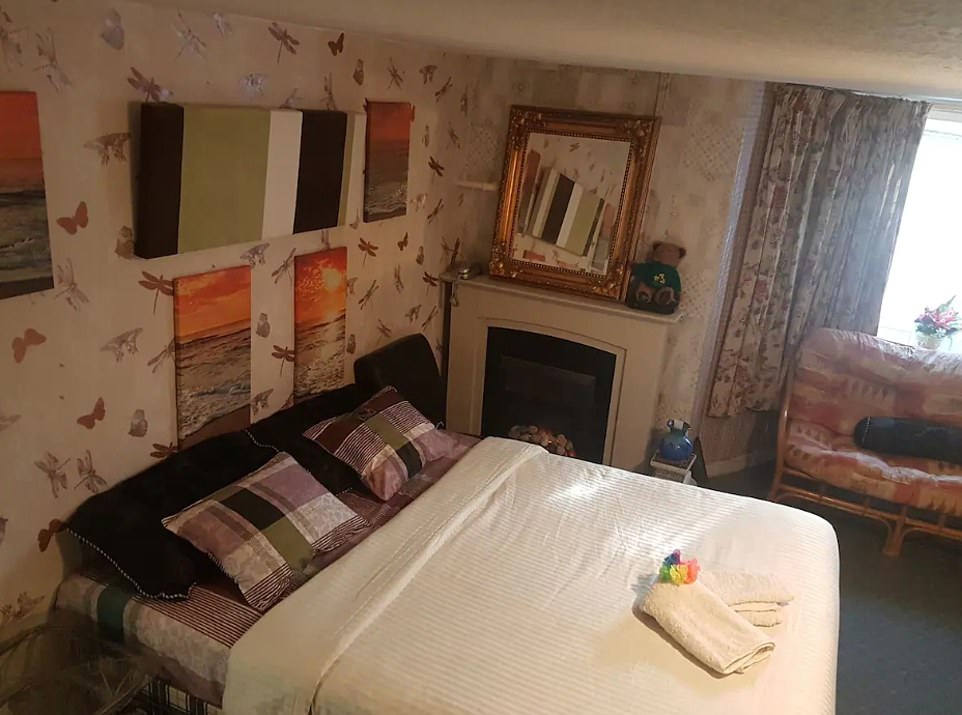 £15/night – BLACKPOOL, LANCASHIRE: Those looking for a seaside break in the North West on a very tight budget could check out this private room near Blackpool beach, which has an average rating of 4.58 stars and is just £15 a night. The description says it is in a ‘peaceful, happy building’, adding: ‘Free green tea and toast always available on request’ 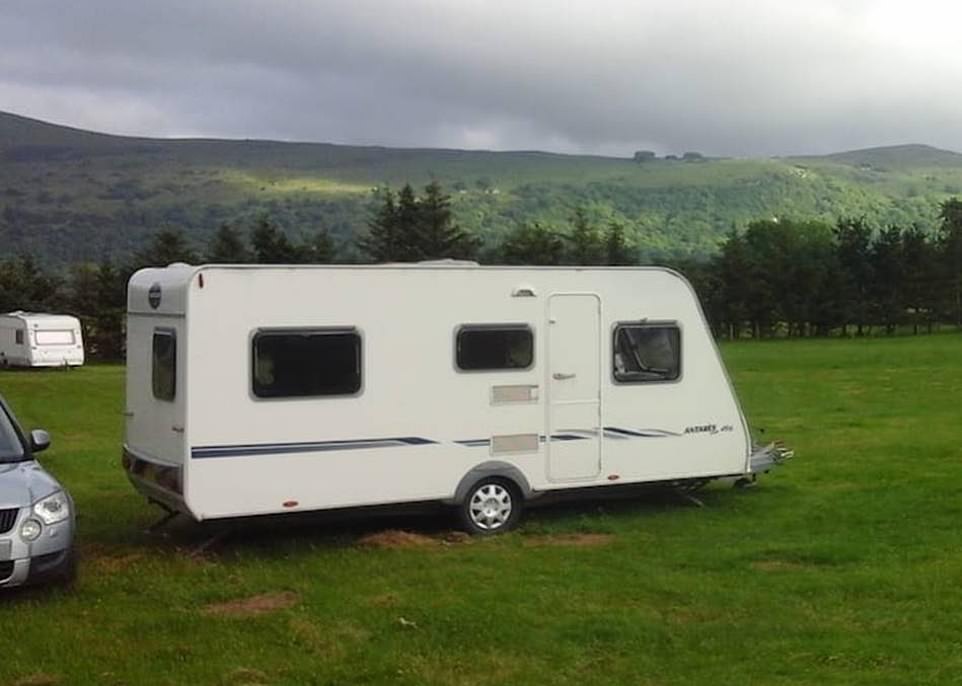 £16/night – HARLECH, NORTH WALES: Another very cheap option is this caravan on the Welsh coast at Harlech – operated by the same host as the other one referred to above for £13 a night. The description says: ‘Normally we set the caravan up for you anywhere in Snowdonia, or along the coastline between Cardiff and Llandudno provided you pay the caravan site fees’ 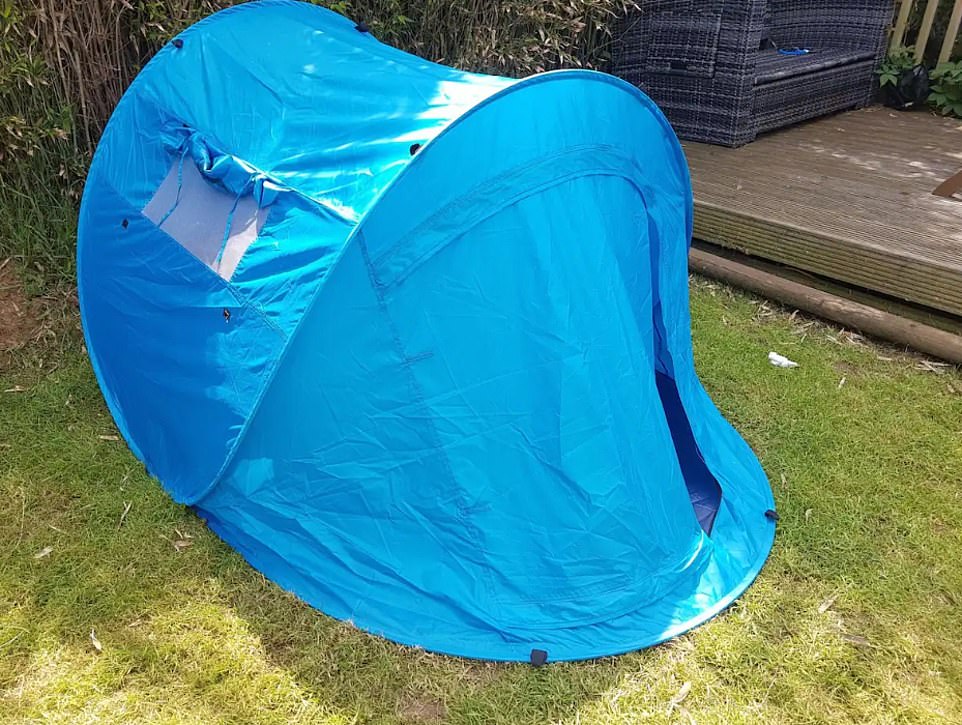 £16/night – PEACEHAVEN, EAST SUSSEX: A very cheap option for staying over on the Sussex coast is this listing, which is simply described as ‘private tent with airbed and sleeping bag’. The host is one of Airbnb’s ‘superhosts’ and the listing has ten reviews which are all five stars. One of the reviews stated: ‘Cosy atmosphere. A wonderful host who met well’ 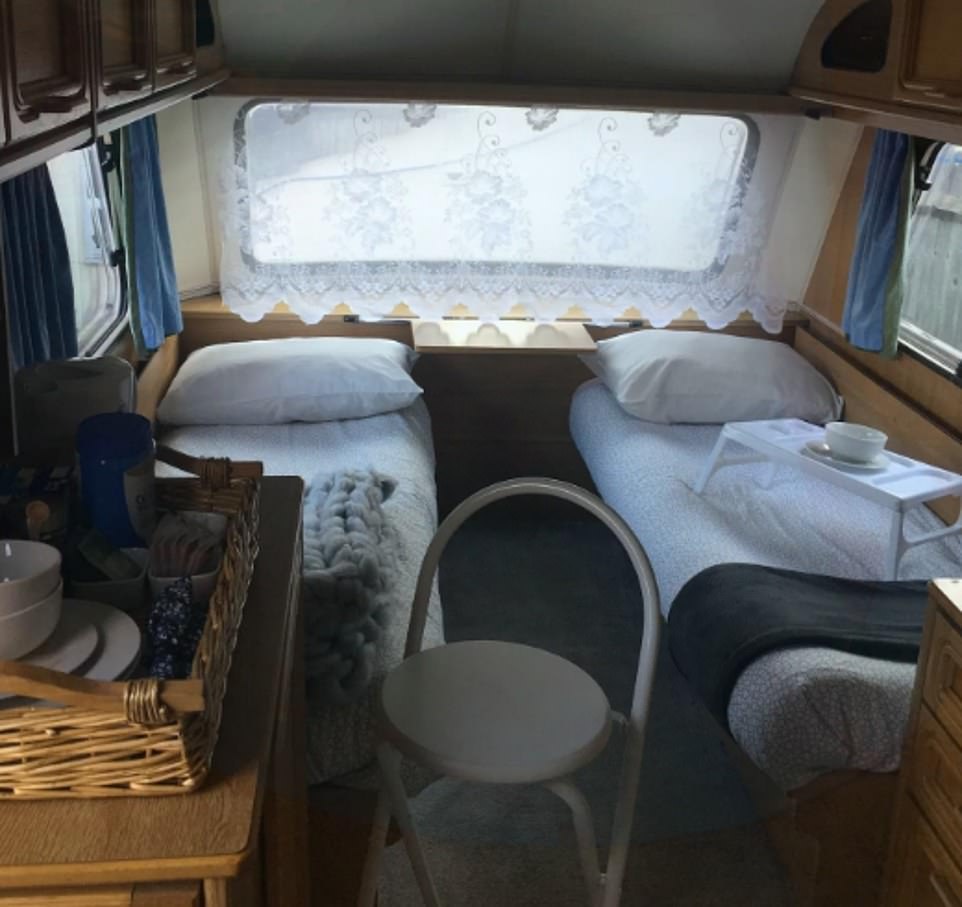 £16/night – SHEERNESS, KENT: This campervan on the Isle of Sheppey is listed in the description as allowing occupants to ‘sleep al fresco in the privacy of a backyard’ and is ‘suited to the adventurous solo or couple travellers to experience Sheerness under the stars’. It also said to be a ‘stone’s throw away from an award winning Blue Flag bathing beach’ 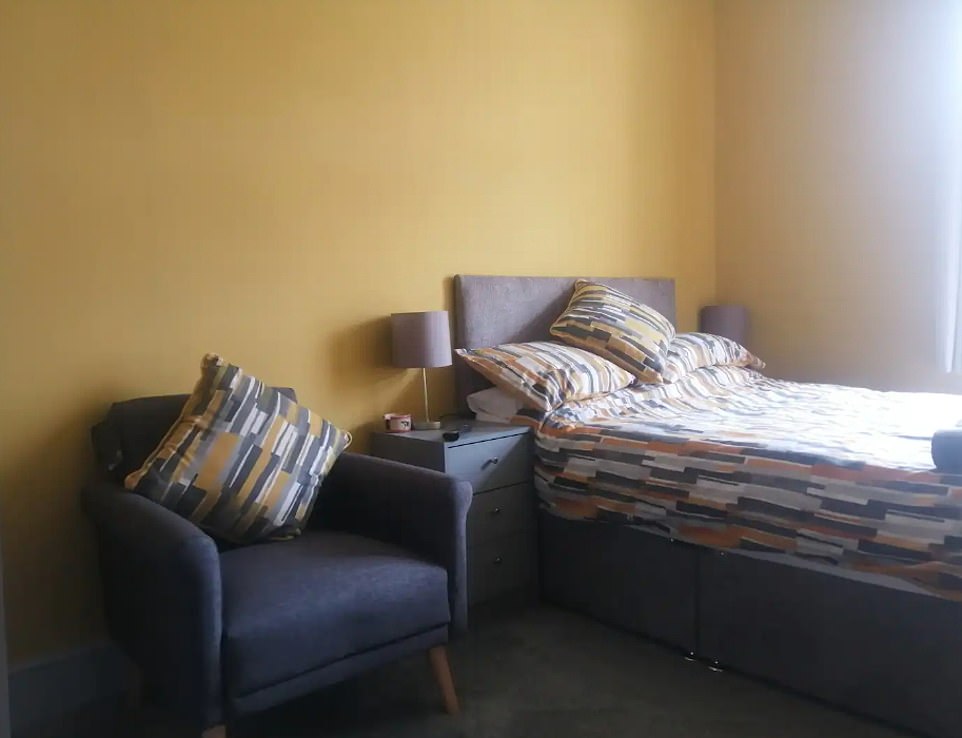 £17/night – BLACKPOOL, LANCASHIRE: This private room in Blackpool was redecorated last year, with the description saying it has ‘all new carpets, furniture, comfortable double bed, easy chair and smart TV’. The listing for the room, which has a 4.88-star average rating, says those who choose to stay there are often hospital workers or people attending events 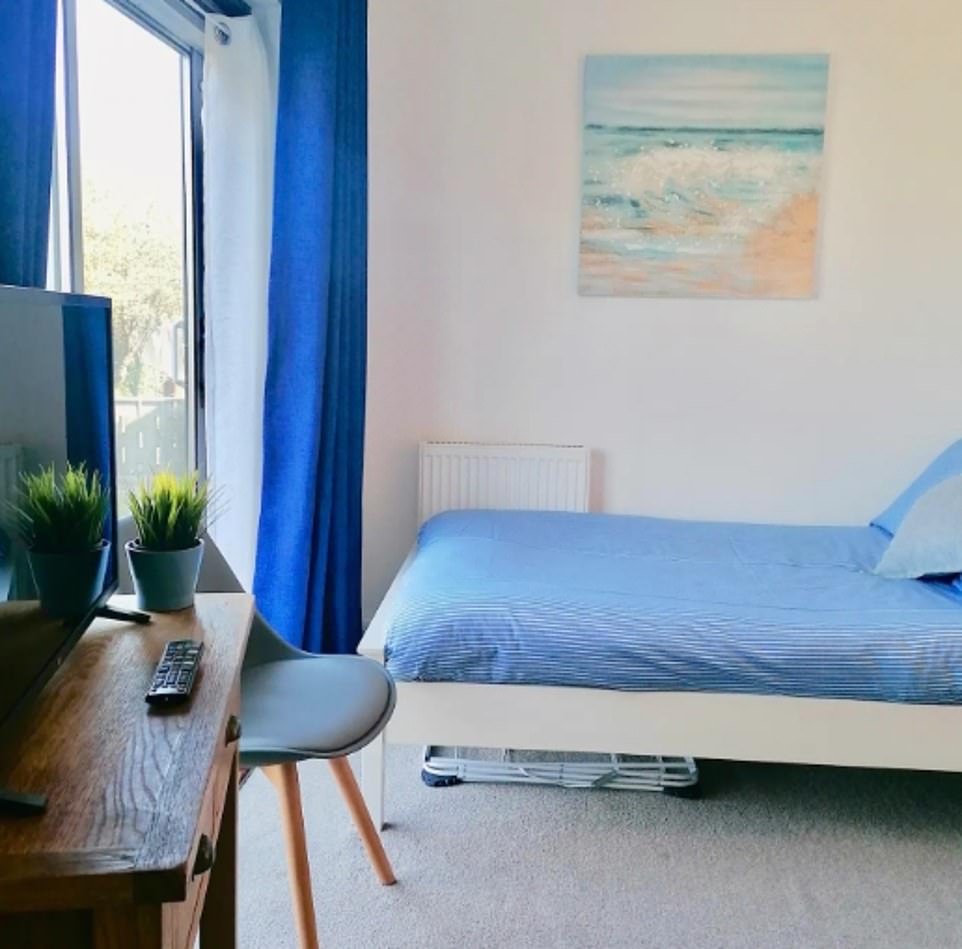 £18/night – WALNEY ISLAND, CUMBRIA: This modern-looking private room is listed as being close to the beach, with the description saying: ‘You’ll love my place because of the location, the views, the ambiance, and the outdoors space’. However, you’ll need to have a job nearby, because it is listed as for ‘people working in the area, not for those on a short leisure visit’ 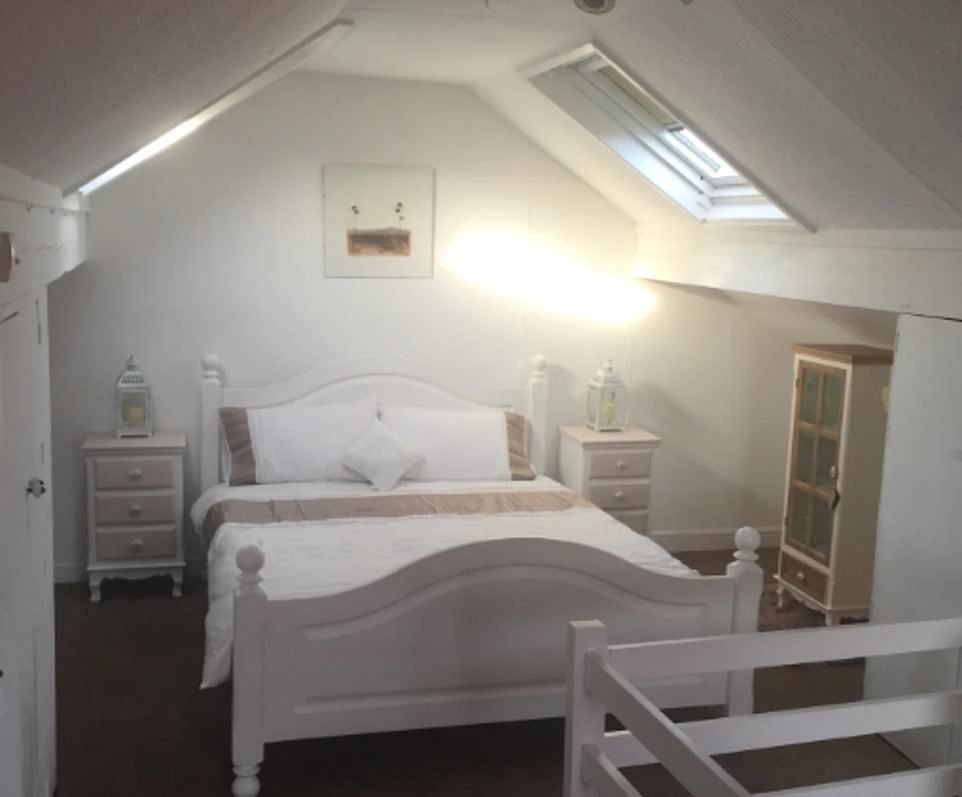 £18/night – HENDON, TYNE AND WEAR: This private room in Hendon near Sunderland is available very cheaply and provides easy access to the local beach. There are nine reviews averaging at 4.89 stars – and the host says she can speak Romanian, English, French, Italian, Spanish and basic Chinese. One review says she is ‘very friendly’ and ‘welcoming’ 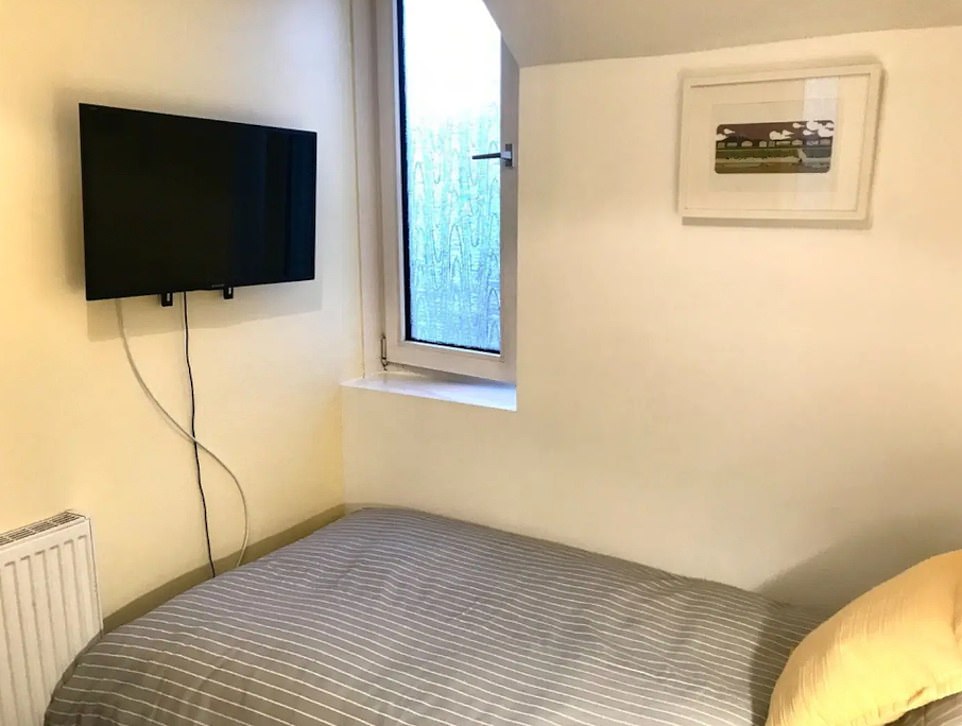 £18/night – WALNEY ISLAND, CUMBRIA: This private room in a townhouse on Walney Island is very cheap and is said to be ‘freshly decorated and furnished’. It appears to be targeted towards local workers, with the owner saying it is ‘perfect’ for those coming working at BAE Systems in nearby Barrow-in-Furness, and there is a ‘weekly rent for as long as you’d like to stay’ 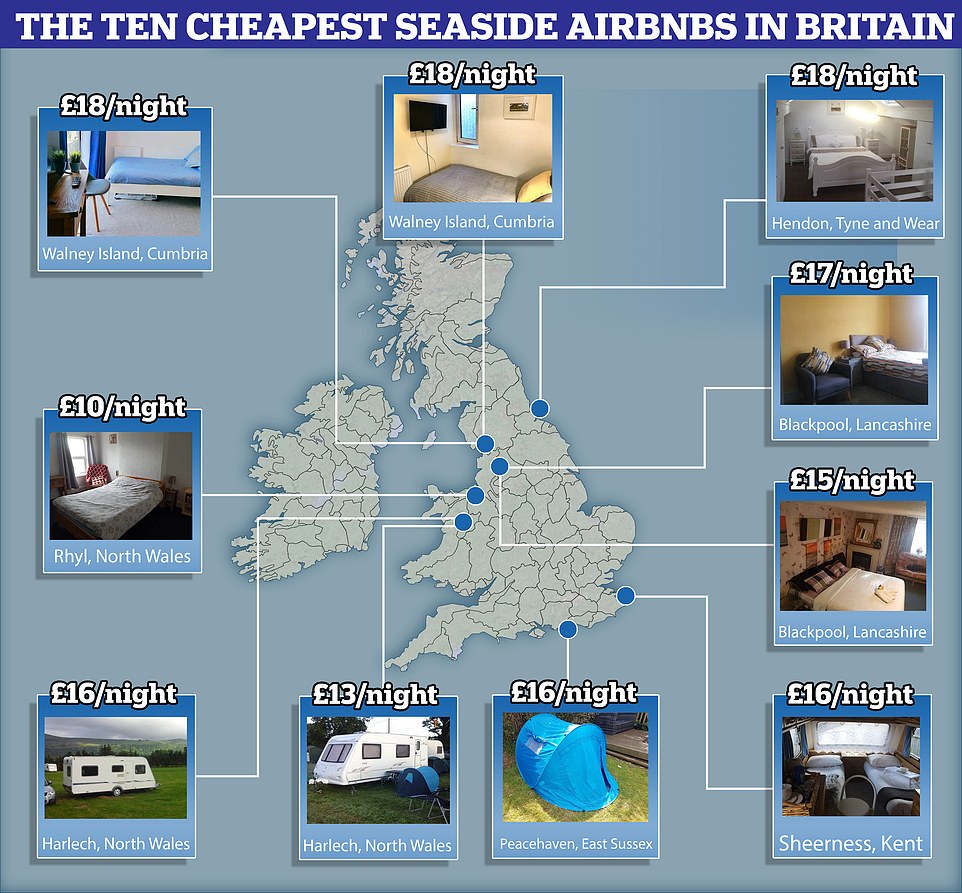 £19/night – FRINTON-ON-SEA, ESSEX: This beach hut on a sandy seafront is available on the Essex coast for a very cheap price, although the listing specifically states that the listing is ‘dawn to dusk only’ because council rules forbid overnight stays – so you will need to find somewhere else to stay overnight. The property has 480 reviews with an average of 4.97 stars 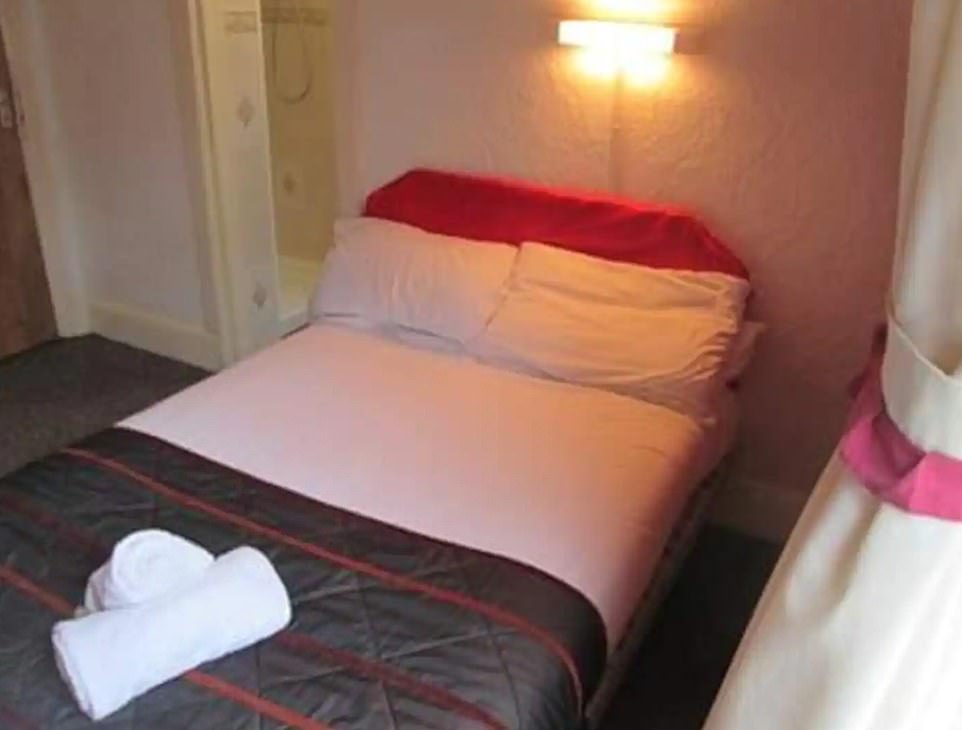 £19/night – BLACKPOOL, LANCASHIRE: This room in a hotel is listed as a ‘newly decorated double room’. While it is very cheap, the average review is only 3.6 stars – with one saying there was no hot water in the shower and they washed in the sink 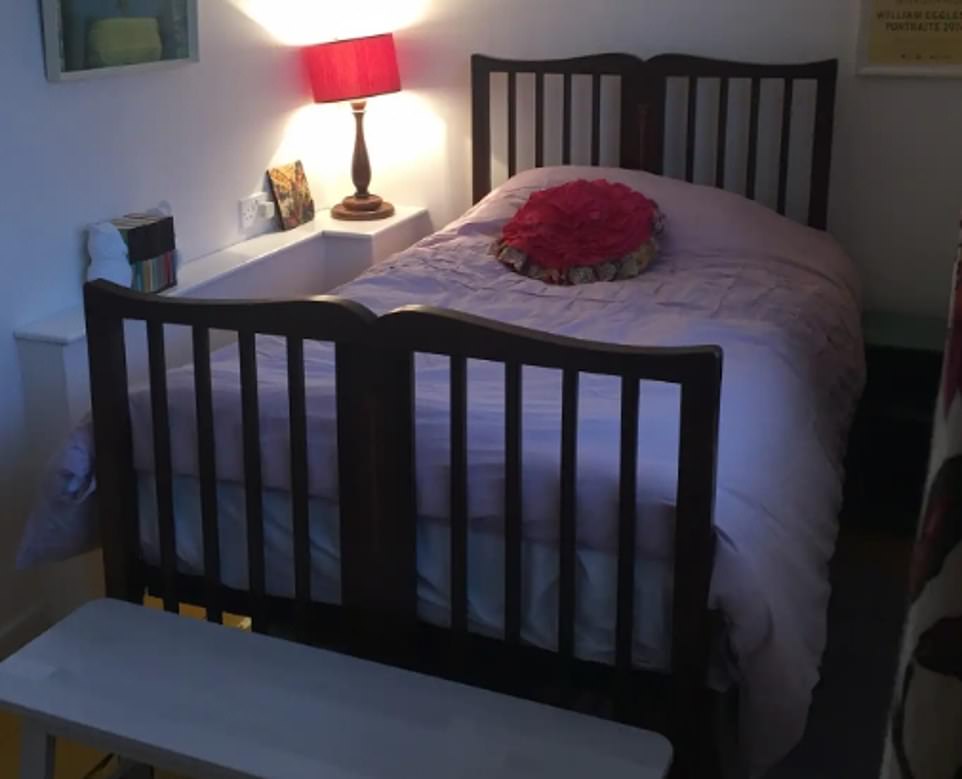 £20/night – WORMIT, FIFE: This private room is located in a village on the south shore of the Firth of Tay in Scotland. While it enjoys impressive views and scenic walks, the area also claims to be the first village in Scotland to be lit by electricity 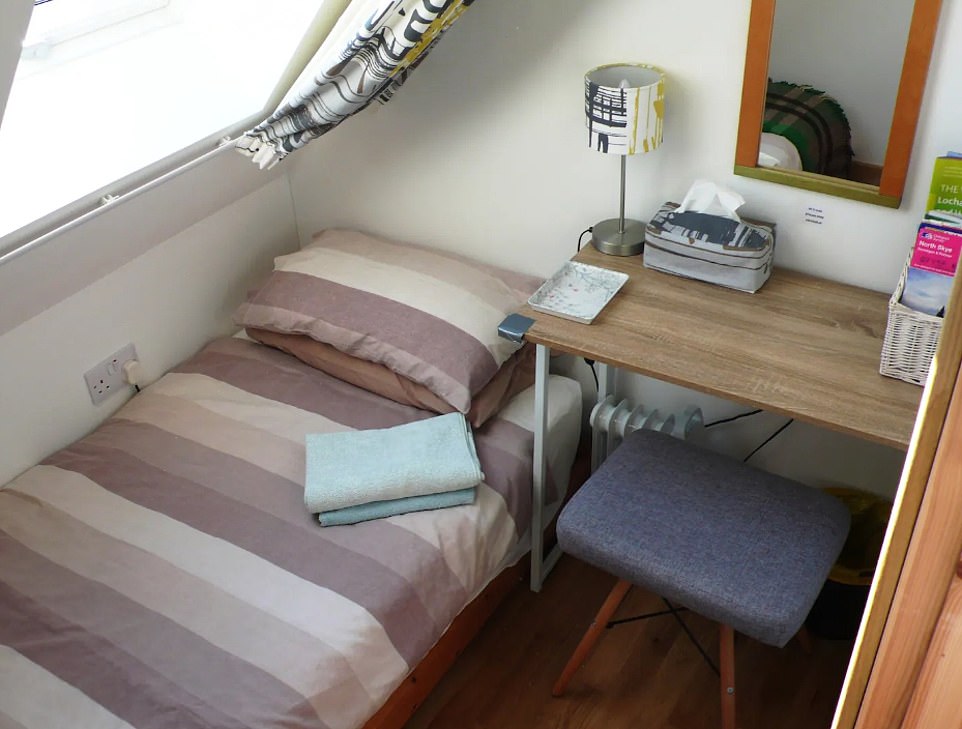 £20/night – DORNIE, SKYE AND LOCHALSH: This property is known as ‘The Signal Box’ and is a tiny box room in a remote part of Scotland near the famous Eilean Donan Castle. It is only for single travellers and is five miles from the nearest shop 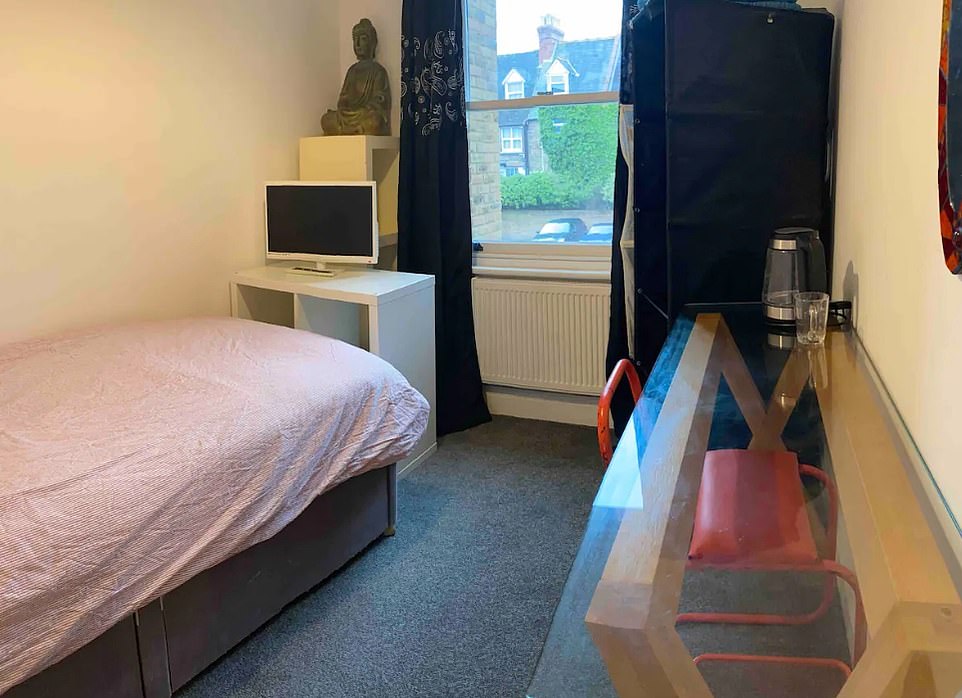 £21/night – RAMSGATE, KENT: This single room in a family townhouse in the centre of Ramsgate on the Kent coast is listed on Airbnb at just £21 a night and is said to be close to the seafront and in a ‘a quiet, family working house with two small dogs’ 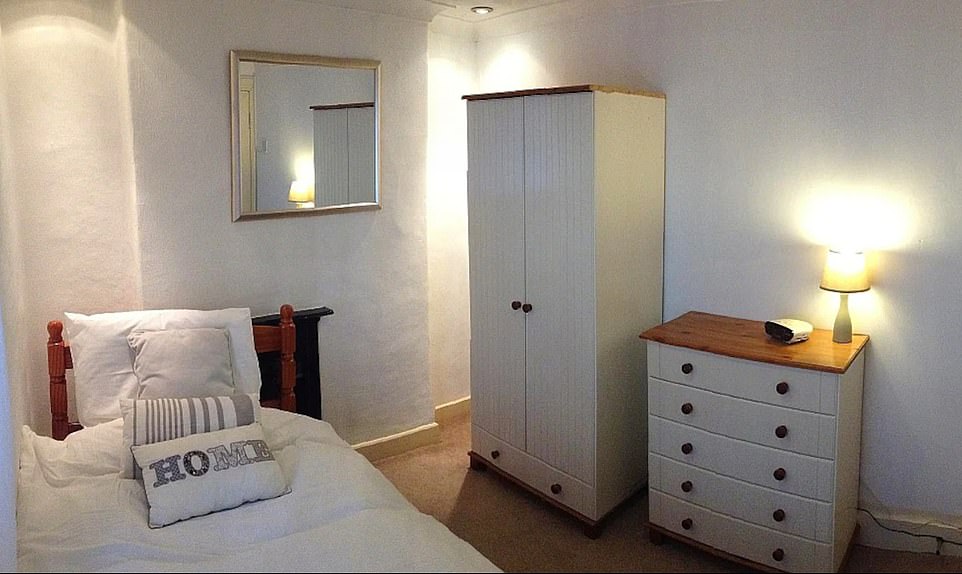 £23/night – ISLE OF MAN: This private room in a cottage is close to Chapel Beach on the island. The description says: ‘The house was originally a butcher’s shop and two traditional Manx cottages – now it is a well appointed, homely place to stay’ 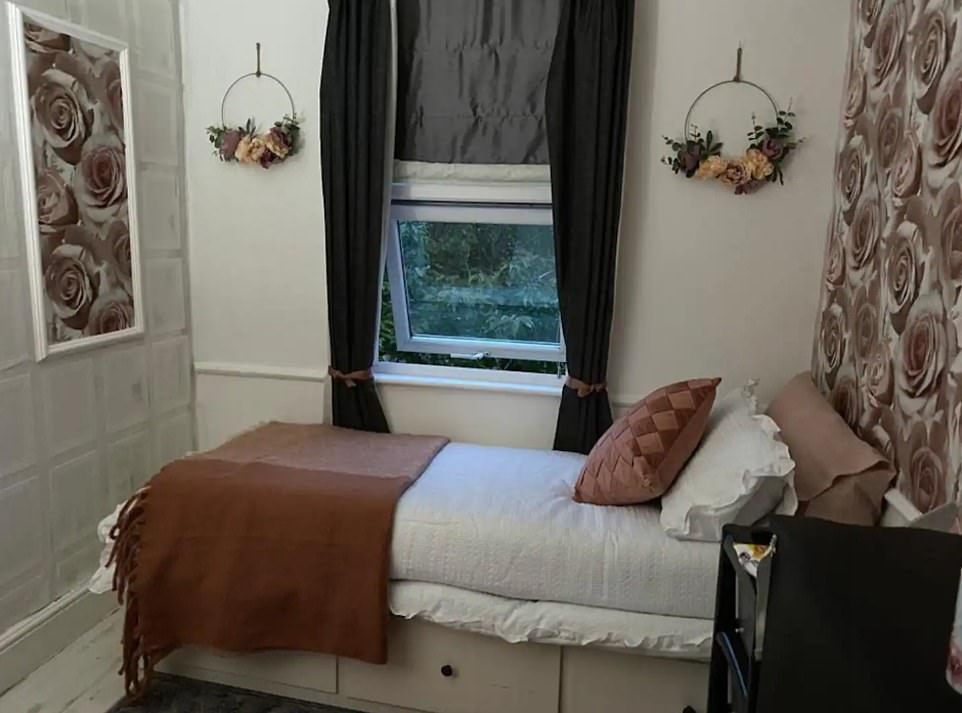 £24/night – WALLASEY, MERSEYSIDE: This private room is located near Wallasey and New Brighton beaches – and close to Liverpool too. It is described as a ‘small but cosy room’ with a single bed as well as a shared kitchen and bathroom 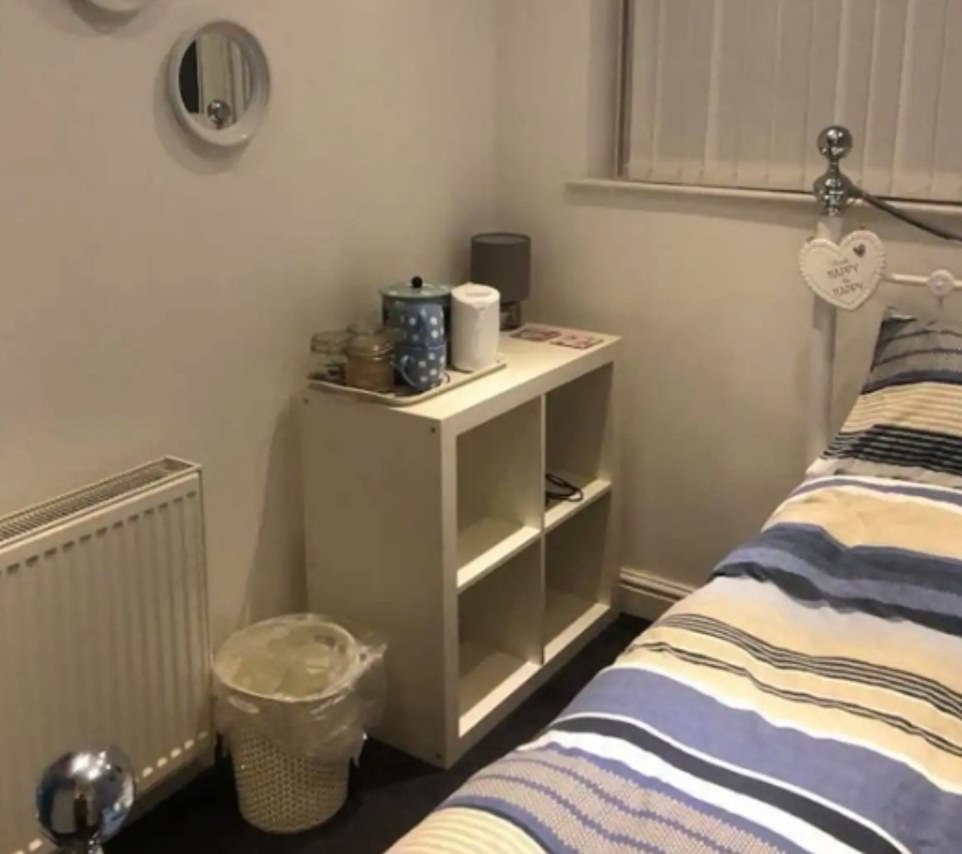 £25/night – BLACKPOOL, LANCASHIRE: Those heading to Blackpool could opt for this private room in a property called Penryn House, built in 1884. There are four rooms in the property rented out through Airbnb and it has a 4.97-star average 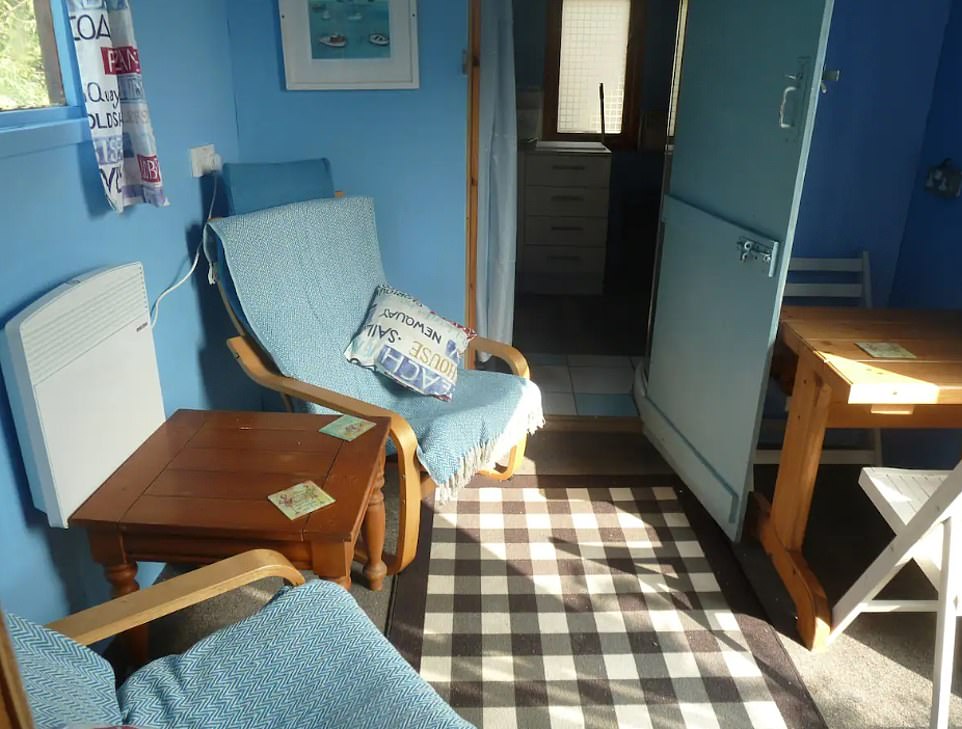 £25/night – ISLES OF SCILLY: It might require a bit of expenditure to get there from mainland England, but this cabin on Scilly is just £25 a night and is ‘designed for the solo traveller looking for a base from which to explore the unique islands’ 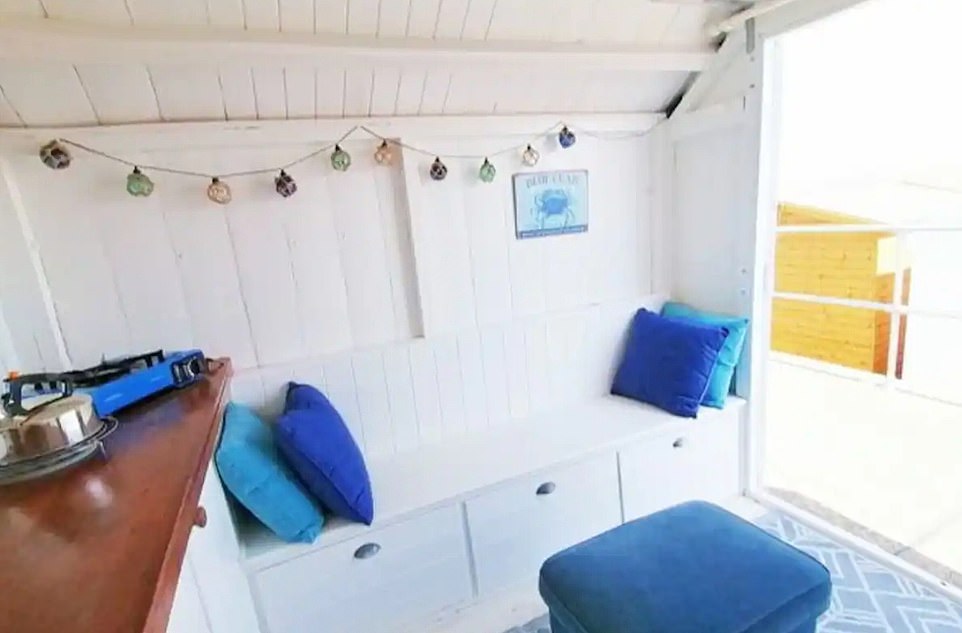 £25/night – FELIXSTOWE, KENT: This beach hut in Old Felixstowe is only available during the daytime, but has eight five-star reviews and says in its description: ‘Reconnect with nature and make memories of your own in our much loved family hut!’