A British billionaire who allegedly shot his game park manager dead after making a drunken ‘sex-for-rent’ indecent proposal has been freed by a judge on £25,000 bail in Namibia.

Tycoon Harvey Boulter, 51, is accused of murdering Gerhard van Wyk, 54, after allegedly offering to allow his son to live on his vast estate in return for sex with his wife.

Park ranger and game reserve manager van Wyk is said to have seen red at the suggestion made to his son Gerhard Jnr and new wife Liani and an argument broke out.

Witnesses told police Boulter pulled a gun from a shoulder holster and in the ensuing struggle it went off and a bullet went through his hand and into van Wyk’s stomach. 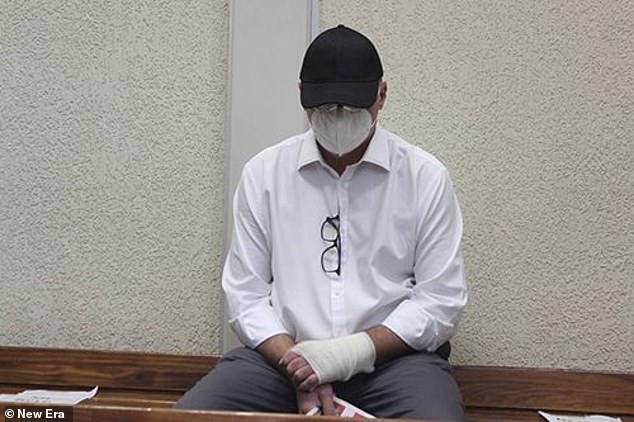 Tycoon Harvey Boulter, 51, is accused of murdering Gerhard van Wyk, 54, after allegedly offering to allow his son to live on his vast estate in return for sex with his wife. Pictured: Boulter appearing at Windhoek High Court for his bail hearing 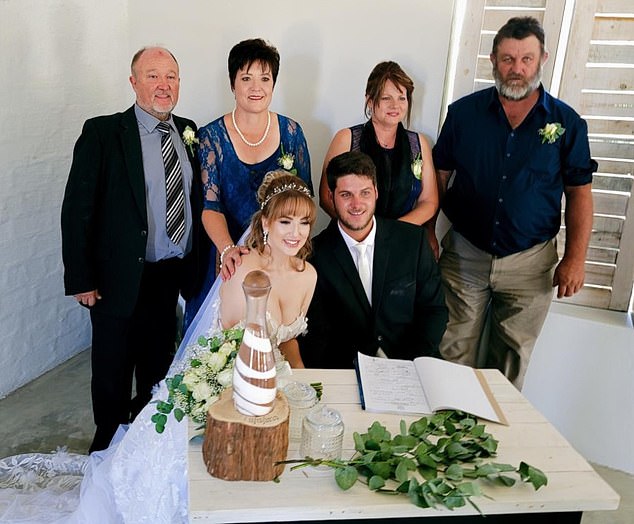 Gerhard van Wyk, far right, died on the way to hospital after apparently trying to wrestle a pistol out of Boulter’s hands during the deadly barbecue scuffle in Namibia. His son Gerhard Jr and daughter-in-law Liani, who was allegedly propositioned by Boulter, are pictured at the front 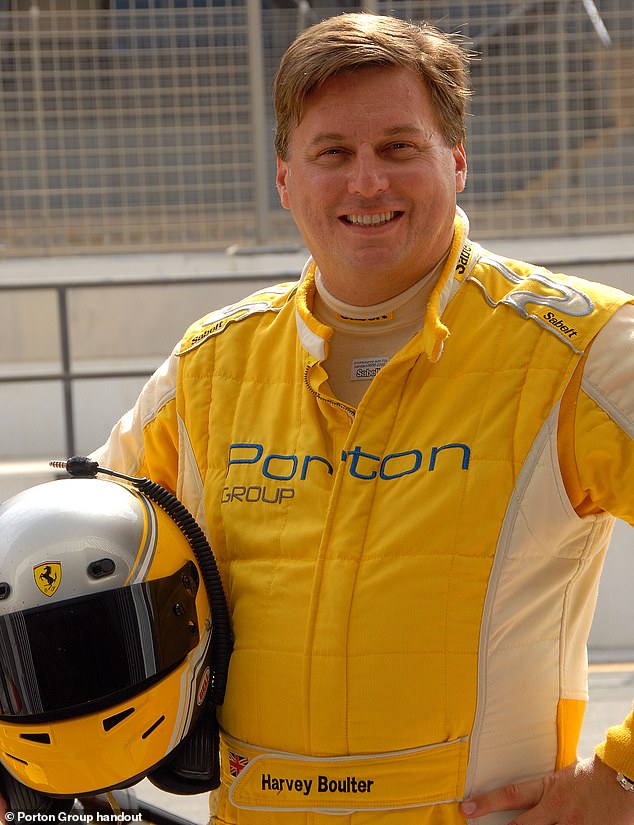 Boulter – who was a donor to Ukip giving the party £30,000 and blew the whistle on a Westminster political scandal a decade ago which led to Tory defence secretary Liam Fox resigning – was arrested for murder

Van Wyk’s wife Alta, Gerhard Jnr and Liani set off on a desperate 100-mile dash from the remote 66,000 acre game ranch in Namibia to the nearest hospital.

But the former soldier turned game park manager died on the drive, just a few miles away from reaching doctors in the remote bush town of Outjo from the bullet wound.

Boulter’s Kaross estate near rural Kamanjab is said to be home to the Big 5 of lion, leopard, buffalo, rhino and elephant which he bought in 2012 for his love of big game hunting.

Boulter – who was a donor to Ukip giving the party £30,000 and blew the whistle on a Westminster political scandal a decade ago which led to Tory defence secretary Liam Fox resigning – was arrested for murder.

The super-rich businessman in 2011 exposed Cabinet minister Fox’s ‘unusual working relationship’ travelling the world with best friend Adam Werritty who he passed off as a political advisor.

Despite the shooting on February 27 the Sussex born investment and defence industry tycoon has not spent any time in the cells but has remained ever since ‘sick’ at a private hospital.

It has led to claims of preferential treatment to Boulter whose lawyer told the bail hearing at the High Court in the capital Windhoek that he had invested £7.5m in the country so far. 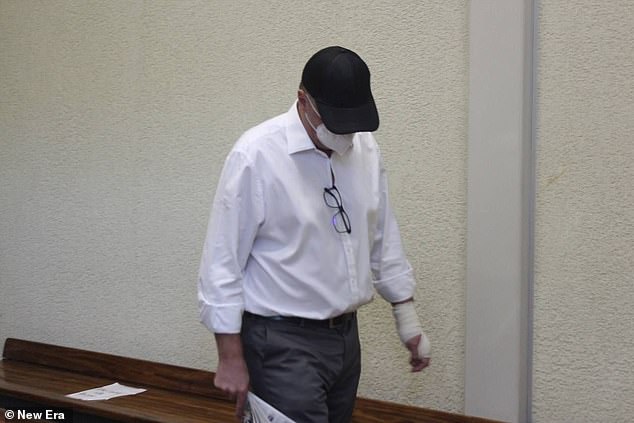 Boulter, 51, leaves Windhoek High Court, Namibia, after being given bail for alleged murder 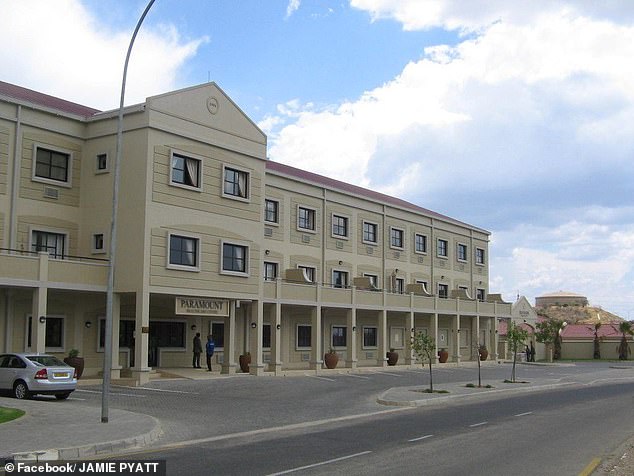 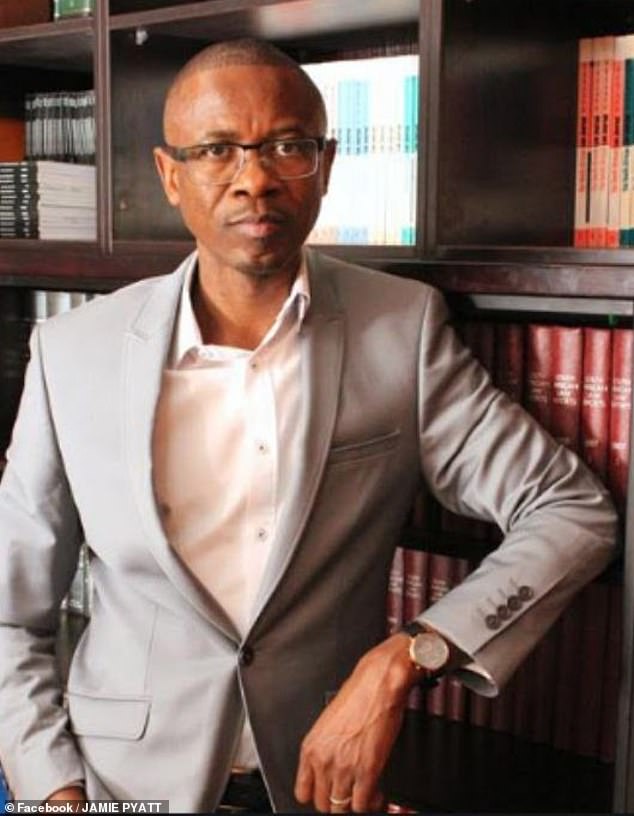 Boulter’s top lawyer Mr Sisa Namandje said he had ploughed £7.5m into the country during the 10 years he has lived there and been a permanent resident since 2017

It has been reported that he rubs shoulders with senior members of the Government but despite being denied bail by magistrates he got it on appeal from Judge Claudia Claasen.

Prosecutor Taodago Gaweseb said the allegations were so serious and that there was a probability of a lengthy jail sentence that it was not in the interests of justice to grant him bail.

Boulter’s top lawyer Mr Sisa Namandje countered that he had ploughed £7.5m into the country during the 10 years he has lived there and been a permanent resident since 2017.

The barrister said he was settled in Namibia and employed 40 people and was running an international business supplying encrypted communications technology around the world.

Boulter’s customers were governments and the military including the USA, the United Kingdom, Australia and New Zealand and that he told the court he was not a flight risk.

He added that he would not interfere with witnesses or jeopardise the administration of justice.

Mr Namandje told the court the shooting happened after a row during a lamb spit bbq on his estate and Boulter felt under attack from Van Wyk and his son when the gun went off.

He added it was Boulter who called the police himself and reported the incident and had co-operated with the police throughout and had handed over his passport to them.

Bail of £25,000 was granted on condition Boulter stays at a fixed address in Windhoek, reports to police once a week, and may not leave Windhoek District without police permission.

Boulter is charged with murder, possession of a firearm without a licence, illegal possession of ammunition and attempting to defeat the course of justice all connected to the shooting. 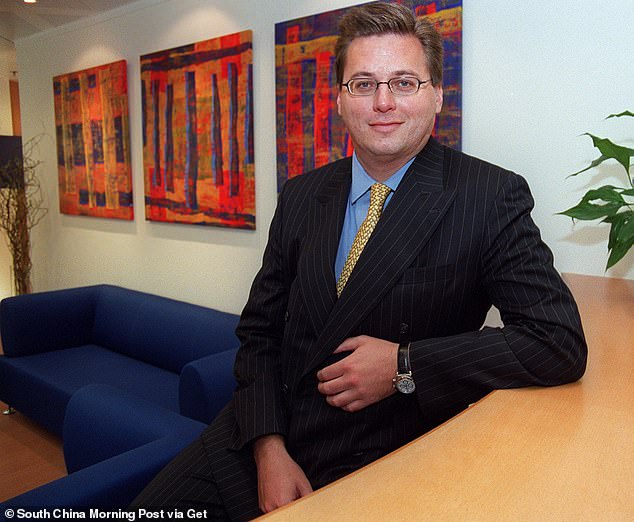 The billionaire, pictured, had allegedly insulted Mr Van Wyk’s daughter-in-law and threatened his family with a pistol

He spoke out as he revealed that Boulter had evaded being held in prison to await trial since the shooting four and a half months ago and suspected ‘individuals’ were helping him.

Lieut General Ndeitunga was quoted as saying he ‘had a problem’ with Boulter’s continued stay in hospital as ‘sick’ adding: ‘He is always admitted and does not want to go to the cells.

‘I am even suspecting some people are favouring him to be a permanent patient in hospital.All suspects should go to the cells’ he said referring to his stay at the Paramount Healthcare Centre.

The clinic in Windhoek caters mainly for private patients and those on medical aid.

Divorced father-of-three Boulter – who is said to own a super yacht and his own private jet – has to appear before magistrates again in Outjo in September.

Friend of the dead main claimed after his funeral that a ‘worse for wear’ Boulter had agreed to allow the son of his farm manager and new bride Liani build a home on his estate.

But tempers flared when he allegedly said that in return she should spend every other night having sex with him and in the ensuing argument Boulter’s gun was fired killing van Wyk.

The bail address for billionaire Boulter was not revealed to the court.