Washington: Billions of red-eyed cicadas, representing three different species, are emerging across a swath of US states, as far west as Illinois and as far south as Georgia.

After hanging out underground for 17 years, a new brood of periodical cicadas has officially popped up in people’s back gardens.

This year, the group of cicadas known as Brood X is expected to appear in the District of Columbia and at least parts of these 15 states: Delaware, Georgia, Illinois, Indiana, Kentucky, Maryland, Michigan, New Jersey, New York, North Carolina, Ohio, Pennsylvania, Tennessee, Virginia and West Virginia. 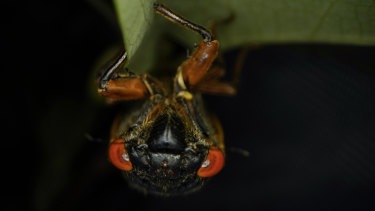 An adult cicada hangs upside down on a tulip tree leaf in Washington.Credit:AP

The Washington, DC area is cicada central, with high concentrations of the bugs.

While statistics on cicada tourism are elusive, the phenomenon appears to be similar to eclipse tourism – an effort to travel into the path of a fleeting natural phenomenon.

In 2021, Brood X seems to have captured the attention of a nation that, in many cases, is also starting to creep back into the light after an extraordinary amount of time underground. 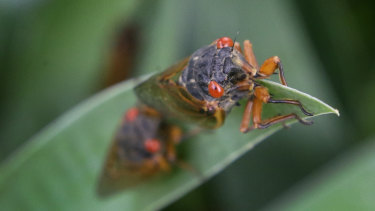 A periodical cicada in a garden in Lawrence, Kansas. Credit:AP

“I’m curious as to what the deal is with Brood X myself in terms of interest and popularity,” said Greg Holmes, a cicada fan who is helping gather data on the bugs.

An app called Cicada Safari allows cicada seekers to search for the bugs and post updates to a live map.

Users on the website Cicada Mania have been seeking help with travel plans for months, asking about the best place and time to get the maximum Brood X experience. And questions about travel have been popping up on the Cicada Discussion, Science and Study Group on Facebook, said Holmes, one of the moderators.

Holmes is already on the road helping to map the swarm and work on another cicada-related project. The Kansas resident who lives “just tauntingly outside of Brood IV” – next expected to emerge in 2032 – plans to spend at least a couple of weeks on his cicada travels this year. 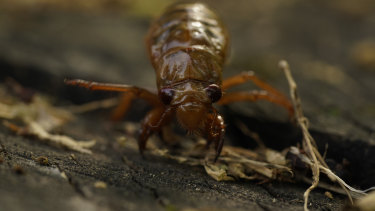 “I’m just a guy who finds a lot of things interesting, and this is one of them,” said Holmes, a photographer.

Areas that expect to be hopping with the insects are trying to make the most of the invasion.

Jessie Fullenkamp has already bought a Brood X shirt for herself and a onesie for her toddler.

Detroit-based Fullenkamp started talking to her friends in Cincinnati about a “cicada-cation” six months ago.

“They thought I was joking at first,” she said.

On Friday, Fullenkamp – who does not describe herself as “a nature or insect enthusiast” – will make the four-hour drive to again witness the emergence of Brood X.

“One billion cicadas,” she said. “That only happens every 17 years, and I can’t miss it.”

Washington suburb Fairfax County, Virginia, has created a “cicada stroll bingo” card encouraging people to snap photos of the critters at certain types of locations, including a historic site, hiking trail or brewery. Those who submit pictures from two locations are entered to win a “2021 Cicada Care package.”

Visit Loudoun, the tourism bureau for the Northern Virginia county, has curated a host of special cicada-themed events and offerings from breweries, boutiques, bars and other businesses for this month and next.

Visitors can sample chocolate bonbons with the insect’s signature red eyes, cicada tacos and a 10-ingredient “BrewdX” beer at a brewery that will display a 1987 and 2004 cicada.

There’s a walk this weekend with a naturalist, a “fly with the cicadas” zip line experience and cottages in a regional park that promises visitors can “sleep under the cicadas.”

“Following the most unnatural of years – the past 14 months – for us to celebrate and really embrace the most wondrous of natural phenomena is a great opportunity,” said Visit Loudoun President and CEO Beth Erickson.

Erickson said the tourism office wasn’t sure if cicada tourism actually exists, but she said the county was happy to officially launch such an effort.

“There’s been great buzz,” she said with a cringe, “about the campaign.”